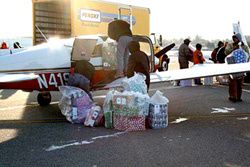 Charitable flights are a terrific way to contribute to the community while doing something you love. As pilots we are aware of the many rules and regulations that impact us. This report will detail the different regulations surrounding charitable flights.

General aviation pilots often engage in sightseeing flights in conjunction with local airport open-house events to raise funds for airport authorities, churches, civic groups, boy scouts and girl scouts, or local community members in time of need. These flight operations not only raise much-needed funds, but also foster productive working relationships between pilots, airport authorities, airport neighbors, local politicians, and other members of the local community. These sightseeing flights are invaluable in terms of promoting the utility, value, and overall image of general aviation to the non-flying public.

The FAA revised the rules for these events by creating section 91.146 in 2007. AOPA has developed the following guide to help members understand the FAA's new requirements. The guide should be used in conjunction with the applicable FARs before you undertake this event to make sure all requirements are met. It applies to flights in airplanes and helicopters only — not gliders (powered or non-powered), balloons, etc. Be sure to check the definitions of charitable, nonprofit, and community events to ensure that your event qualifies. If you do not qualify for the specific event limitations of 91.146, you are required to comply with 91.147. This guide is not meant to provide guidance for those operations.

How to Conduct a Charitable/Nonprofit/Community Event Sightseeing Flight