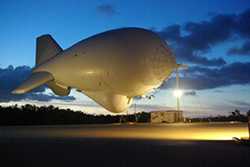 Restricted areas, when active or “hot,” generally contain operations that do not mix well with aircraft. Frequently that means artillery firing, guided missiles, or aerial gunnery. But it can also include something seemingly benign by comparison: a great big balloon on a string. As hazards go, it’s a needle in a haystack. But tempt fate, and you could end up flying smack into the business end of the needle.

On the night of April 20, 2007, the pilot of a Cessna 182 Skylane was attempting to pick up his IFR clearance from ATC when he wandered into the restricted airspace surrounding an aerostat radar facility in Cudjoe Key, Fla. The airplane struck the airship’s tethering cable, which sliced through the wing and sent the airplane spinning out of control into the shallow channel below. The pilot and his two passengers were killed.

The pilot had filed an IFR flight plan from Key West International Airport to Leesburg, Fla. He departed Key West VFR around 11 p.m., intending to pick up his IFR clearance from approach control once airborne. After taking off from Runway 27, he turned to the east and climbed to 3,500 feet msl.

The pilot tried unsuccessfully to raise Key West Approach via radio. At 11:08 p.m., he contacted Miami Center and stated, “We’re, uh, trying to contact Key West Approach. Uh, get no reply. We’re trying to pick up our clearance out of Key West to Lima Echo Echo.” ATC responded that approach control had closed at 10 p.m. The Miami controller told the pilot to stand by while he coordinated his request.

Nearly four minutes passed. The airplane continued flying east, directly toward R-2916, a small restricted area surrounding the Cudjoe Key Tethered Aerostat Radar System (TARS) facility. TARS is a narcotics interdiction program that uses downward facing radar to detect low-level targets. The radar equipment is housed inside an aerodynamically shaped, helium-filled balloon roughly twice the size of the Goodyear Blimp. The unmanned airship is tethered to the ground using a narrow, unlit cable stretched tight by 2,400 pounds of tensile force. On the night of the accident, the aerostat was deployed at the end of 8,000 feet of cable.

Following a shift change, a second Miami Center controller radioed the Skylane pilot at 11:12 p.m. with a transponder code. The pilot acknowledged. ATC then asked if the pilot was airborne or waiting to depart. When the pilot responded with his approximate position, the controller stated that he wasn’t picking up the Skylane’s transponder yet and warned that he might be nearing the active restricted area. Moments later, a garbled transmission was received, followed by silence.

A video camera monitoring the airship recorded the Cessna approaching and striking the tether, then spinning uncontrolled out of the field of view. Witnesses reported that a wing went “flying off” when the airplane collided with the cable, and the remainder of the aircraft went tumbling into the channel below. The main wreckage was found near the TARS facility in three to four feet of water. A substantial portion of the right wing was discovered about a quarter mile away. The aerostat tether remained intact and suffered only superficial damage.

The NTSB accident investigation lasted nearly two years before a probable cause was released. In the end, however, the conclusion contained no surprises: The accident was caused by “the pilot’s failure to maintain clearance from an active restricted area, which resulted in the airplane colliding with the tether of an aerostat.” 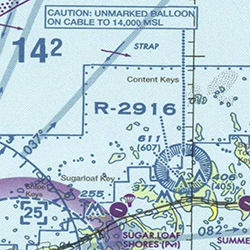 What are the chances of a 36-foot-wide airplane striking a one-inch cable in a restricted area four statute miles across? Pretty slim—about one in 600. But the likelihood of it happening outside the restricted area is zero. It’s critical for pilots to be familiar with any special-use airspace in their path—and maintain the situational awareness necessary to avoid wandering into dangerous areas.

R-2916 is depicted on both the Miami sectional chart and the L-23 IFR low-altitude en route chart. In both cases, the restricted area is accompanied by a cautionary note about the unmarked balloon and cable extending up to 14,000 msl. Because the accident pilot had not yet been radar identified by ATC, he was operating under visual flight rules and bore the responsibility for steering clear of restricted airspace and obstacles.

This accident also illustrates the importance of having accurate frequencies and facility information prior to any flight. Had the pilot not wasted considerable time attempting to contact a closed ATC facility, he might have been picked up by Miami Center sooner—with enough time to have been vectored away from tragedy.

“Airspace for Everyone” Safety Advisor