If you train new flight instructors, making sure that your customers know what to expect on their initial CFI checkride can help them be more successful and prevent them from wasting time on things that won’t help them pass the test.

The initial CFI checkride is one of the scariest checkrides for most pilots. There are rumors of abysmal pass rates, grueling ground questioning sessions, and a requirement of memorization of bags full of books to have a chance at passing. The reality is very different.

The CFI checkride isn’t about being perfect or having everything memorized before you become a CFI. It’s about making sure you are prepared to be a CFI, and that means to teach. Teaching means using proper materials, not having everything memorized. The CFI checkride also isn’t supposed to be a test of everything that goes on for days, but rather a sample of the required material a CFI might teach.

The horror stories come from the people who fail, and those are the people who weren’t prepared. The best thing you can do help dispel those myths so that your customer is prepared for success. Let’s address some of the most common ones.

A CFI candidate needs to have everything memorized

Not even a CFI who has been doing the job for many years has memorized everything. Sure, there are some things the CFI candidate needs to know. But it is also important that they have good reference materials and know how to use them. Make sure CFI candidates can teach using reference materials. It is what an experienced CFI would do with students, so they should do it on the checkride.

The CFI needs to build lesson plans for every possible maneuver

Many CFI candidates spend countless hours preparing “lesson plans” for every possible maneuver an examiner may ask them to “teach” on the test. It is more important that a CFI candidate know how to build a good lesson plan, how to implement it, and how to use that to teach the student. Again, references are key to success. Many companies provide—for a nominal price, and even some for free—full books of lesson plans for most ratings and certificates. Encourage your customers to use these as a template on their CFI checkride, and modify them for the appropriate airport and aircraft. Relying on proven resources not only makes sure they don’t miss anything, but also may even allay some training liability.

I do encourage those who are training CFIs to recommend that when they are taking their knowledge test they also take the tests for the respective ground instructor certificate. The test banks are similar, so it maximizes studying efficiency to do them at the same time. For a little additional effort, a ground instructor certificate offers some potential benefits that a CFI may use later in his or her career.

The ground portion of the CFI checkride will be eight hours

Wow—as a designated pilot examiner, I certainly hope not. A CFI test is supposed to be completed in a single day. That means both the ground and flight portions. While the CFI ground portion often will take three to five hours, if it is going beyond that it is probably not a good sign. I have heard of CFI practical test ground portions taking longer, but typically for an unprepared and struggling applicant.

Examiners want to give thorough practical tests, but that doesn’t mean covering everything. The CFI Practical Test Standards require a DPE to sample from various areas of the material—not to cover it all. A CFI candidate won’t be asked to teach everything. When things are going well, this moves relatively quickly. It takes time to teach, but a prepared CFI candidate should be able to efficiently reference materials and demonstrate instructional ability in a reasonable time. Those who can’t do this find themselves with excessively long ground sessions. Many of these result in disapprovals.

Most people fail the first time

This is false. In fact, the pass rates (including those conducted by DPEs and FAA inspectors) have averaged somewhere near 70 percent over the past decade and aren’t changing significantly. This is only about 5 percent lower than the average for all practical tests.

Assuming a CFI applicant is prepared, the odds of passing are much better than the rumors may indicate. So why does everyone think that the pass rate is that bad?

I think it is just that bad news spreads quickly and people complaining about their performance tend to do it more than those that have a positive and uneventful outcome. 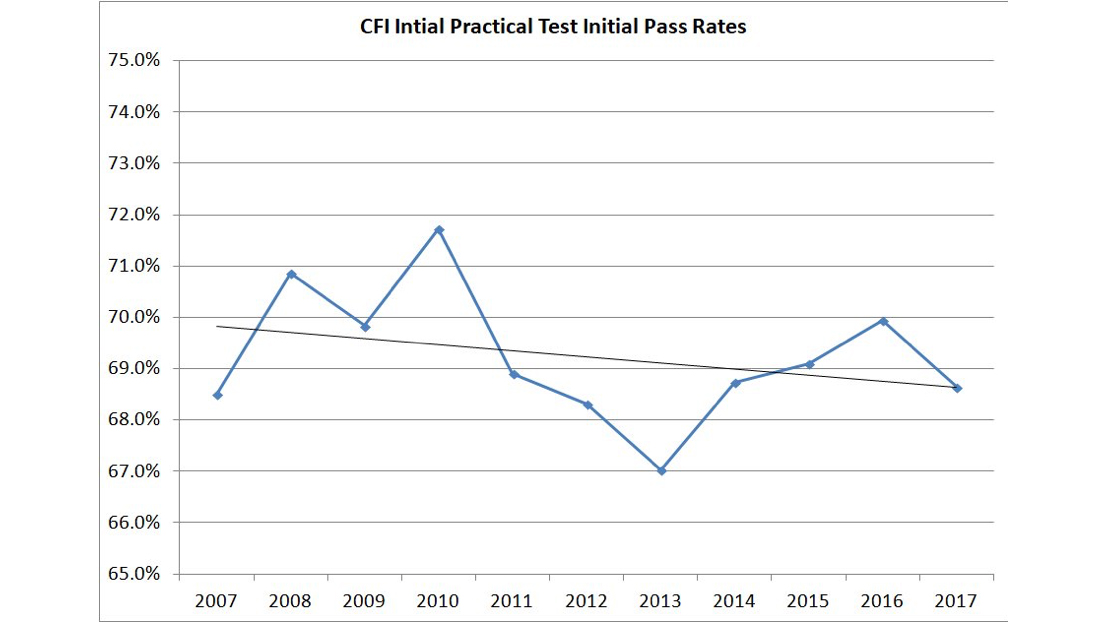 Easier to pass with DPE than with an FAA inspector

Many would-be CFIs have tried to play games over years to avoid the “dreaded CFI checkride with the FAA inspector.” Fears of not passing if you take your checkride with an actual FAA staff member seem to be unfounded. 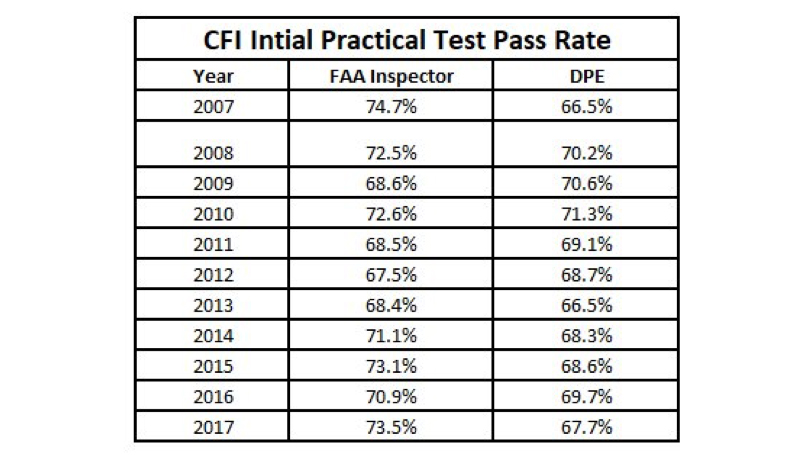 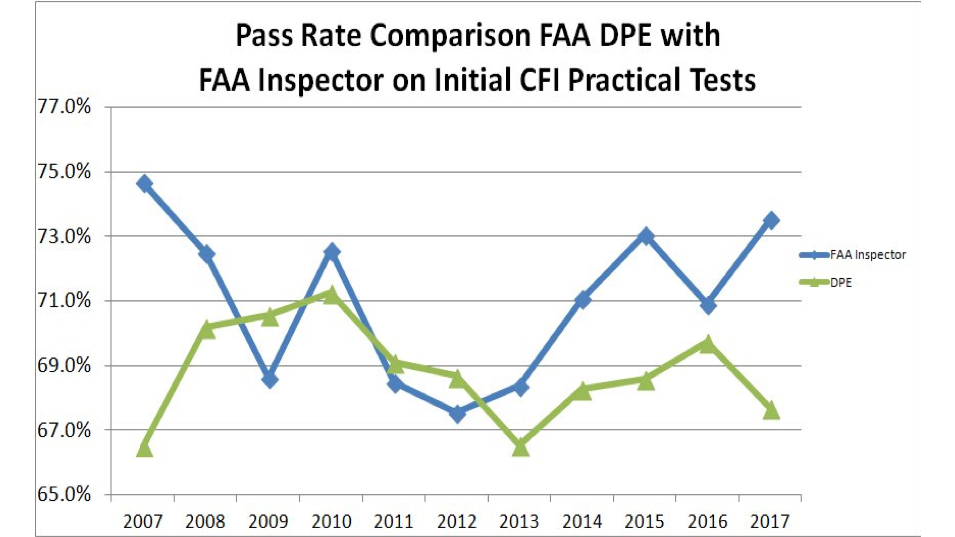 While the pass rates are marginally different, the sample size is pretty small. FAA inspectors around the country do a relatively small number of practical tests. On average over the last decade, a CFI candidate would have a 2 percent better chance of passing with FAA staff than with DPEs. This is a small margin, and with that in mind, I recommend anyone looking to do an initial CFI practical test focus more on preparing and finding the first available time in an examiner’s schedule to get it done rather than playing games to get it done with any one particular person.

These numbers are going to change again. Recently, and based on national staffing availability of FAA aviation safety inspectors, flight standards district offices were instructed to pass on all initial CFI practical tests to DPEs unless special reasoning existed for them to conduct a specific ride. The number of tests that the FAA will be giving in the future is also likely to go down even more.

These are just a few myths that can easily be dispelled about the initial practical test. By giving your CFI applicants a proper understanding and a little planning, you can help take some of the jitters out.

At a time when instructor turnover is high, it’s important for flight training businesses to help their customers to be successful and make sure they can get CFIs trained for their own businesses. These tips will let you do both.