Get the app Get the app
AOPA will be closed July 4th, in observance of the Independence Day holiday. We will reopen at 8:30 am ET on Tuesday, July 5.
Pilot Resources Aircraft & Ownership Aircraft Fact Sheets Alon Aircoupe 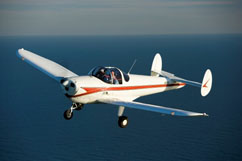 One comments on the Ercoupe only with extreme caution, for the owners of the marque are a vociferous lot and prone to aggressive defense of their mounts. They will tell you how it was designed, prior to World War II, without rudder pedals, as a spin-proof airplane by the genius Fred Weick, who went on to many more successes in aviation — notably the Piper Cherokee line. They will accurately recount that it is nearly viceless in handling, can land at any speed from 60 to 110 mph, was the first tricycle-gear airplane to be manufactured in quantity, was the first general aviation airplane to have a completely cowled engine, and is the source of great fun. For it is, overall, a most satisfactory airplane, one to make a knowledgeable pilot happy and an owner proud. Yet, for the uninformed, snide comments seem to come easily: "Who would fly an airplane that was designed to be safe, for crying out loud? We, pilots, are risk takers, not wimps. It's OK for those who can't face up to aviation." And worse. Fortunately, those sentiments are overly simplistic, and uttering them simply brands the speaker as ignorant of the complexities of the Ercoupe.

So how did this unique flying machine develop? In the 1930s, Fred Weick, of the National Advisory Committee for Aeronautics (NACA), designed the W1, which won a competition for a stall- and spin-proof airplane. He associated with Engineering Research Company (ERCO) and changed his design to a low-wing model that became the Ercoupe. First flight was in 1937, with production following immediately. The 75-horsepower machines sold well, for they were inexpensive and a step above virtually everything else on the market. As the Depression waned, 112 were built, but production was stopped by World War II. With the end of the war, Ercoupe joined the boom and bust of 1946 to 1948. Five thousand subtly varying models with horsepower from 75 to 90 were rolled out of the factory in the two years before things collapsed. The type certificate changed hands a number of times after that and a total of about 400 more airplanes were made under the Aircoupe, Alon, and Mooney names, but only those made by ERCO were Ercoupes.

Prior to flying an Ercoupe it is wise to learn the peculiarities of the airplane for the simple reason that it is different enough from everything you have flown that what you do not know can do you in. Despite being spin-proof, it will develop a very high sink rate at low speeds. By the same token, it has a fairly flat climb gradient, so one must be wary operating where obstructions are present.

Enough of the gloom and doom. The essence of this airplane must be discovered. Walk out to where it sits, kind of stubby, trying to be businesslike on its tricycle gear with its airliner twin tails, and be reminded of the child who is doing his best to be serious about things but cannot seem to avoid giggling.

To figure out part of the mystique and see how the aileron/rudder interconnect works, turn the control wheel completely upside down, walk behind the airplane, and look forward. The full-span ailerons deflect a long ways, the up aileron more than the one going down, reducing adverse aileron yaw. The twin tail clearly places the rudders outside the slipstream of the propeller, helping to reduce the left-turning tendency. Only the rudder on the inside of the turn deflects noticeably. To allow the airplane to be landed at almost any speed does require one extra preflight item. The nose strut must be inflated so that the top of the tails is exactly six feet three inches above the ground. This gives a nearly zero angle of attack at rest. It means that you must rotate on takeoff, but also means that once you put the airplane on the ground and lower the nose, it is pretty well finished flying.

It is time to strap in and have at it. Turn on the fuel (there is no mixture control) figure out where the master switch is (most are on the shelf behind the passenger), and turn it on; give the engine a few shots of prime, turn on the mags, and hit the starter. The small Continentals, when in good shape, seem to light off quickly, then just sort of hush the propeller around at idle. With the canopy open, the breeze through your hair is a good indication that this little beast is going to be fun.

Taxiing is just plain different. Don't bother fighting the urge to laugh out loud as you steer the airplane, using the control wheel. You think of the years of hearing the most pejorative reference to lousy pilots as "driving" their airplanes rather than flying, and of the horrible advertisements of bygone days promising "drive it up, drive it down" and wonder to what depths you have sunk. But, as my wife points out, the airplane is so funky that you quit worrying about what anyone is going to think and just enjoy yourself. So, hang your elbow over the canopy rail as you taxi, because what matters is that this collection of parts will rise off the ground and fly.

Rotate at about 65 mph. If you are on a short field with obstructions, there is the nearly overwhelming feeling that you are tearing toward destruction (you are) and a desire to raise the nose too soon (resist it). Climb at about 75 mph, which will generate about 500 feet per minute. If you climb too slowly, the left-turning tendency will mean that you must hold a lot of right wheel, causing significant drag from displaced control surfaces and a loss of lift because the climb takes place with the right wing low, which does not help your climb rate a bit. An Ercoupe climbs poorly below about 70 mph. Most Ercoupe pilots have had experience watching things off the end of the runway get larger rather than smaller. This distressing state of affairs is only aggravated by raising the nose and ruining what leisurely climb is available.

It soon becomes apparent that the roll and pitch controls are remarkably well harmonized for an airplane of this vintage. One of the reasons the airplane is so loved is that it flies nicely. It fits in that small envelope between overly responsive and overly stable. In turbulence it bounces about, as do all airplanes with light wing-loading; challenges you to hold your altitude; and wallows due to adverse aileron yaw when making small control inputs. Yet, leveled off in smooth air, it more or less stays where you put it and seems, at all times, to be eager to respond should you desire to toss it about a bit. When you ask for it, roll rate is brisk. Interestingly, a faster roll input on the control wheel keeps the ball in the center of the race more effectively than do slower roll commands.

The canopy provides superb visibility, so travel by Ercoupe is to enjoy the countryside in slow motion. The Ercoupe moves along at about 100 mph, burning a bit over 5 gallons per hour, which is most acceptable for going places without spending the family fortune.

Roll into a steep turn and try to stall the airplane. You will not succeed if the elevator is rigged correctly. Beyond a certain bank angle, you discover, it is impossible to hold altitude. Full up elevator travel is reached, the ball will be in the center, and you will be descending. At altitude the descent may not be easily detected without reference to the altimeter. However, it can become quite significant and get a pilot into trouble close to the ground. The solution is easy, and virtually instantaneous — reduce the angle of bank, though it may be necessary to fly level for a while to gain enough speed to climb.

Landings in an Ercoupe are experiences to be shared. They can be performed in many different ways. Should you be so inclined, and if the nose strut is correctly inflated, you may touch down at cruise speed. Yes, it is a design feature of the airplane. When the aircraft is rolling on all three wheels, the angle of attack of the wing is nearly zero, so the airplane will remain on the ground. Every owner seems to go out and confirm that the story is true, which it is, although such a landing has to be handled gingerly until you have slowed. Remember the wipeouts you had as a child on your tricycle? It is not a wise way to handle a crosswind. Far more pleasant is to approach at about 80 miles per hour, slowing to about 70 over the fence, but no slower or you may not be able to flare without power.

Touchdown on the trailing beam gear can be one of those "are we down?" affairs, for the gear travel is some 12 inches. Mr. Weick was among the first to discover the benefits of trailing-beam main gear, something the rest of the industry did not place into large scale production until the 1970s. Yes, Virginia, you will touch down in a crab in a crosswind. No, the gear does not cas-ter, the trailing beam design simply turns the airplane to point in the direction in which it is traveling, although with a bit of a sideways jerk to the occupants. Famed Boeing test pilot Tex Johnston put his pilots into Ercoupes to teach them how to land in a crab so that they would not hit the pods of the prototype 707 and 717 (KC-135) on the ground in crosswinds. The design also means that you must be prepared to fight the tendency to weathervane by turning the wheel away from the wind, contrary to everything you learned in three-control airplanes. Otherwise, you will join the ranks of the embarrassed who have departed the upwind side of a runway while negotiating a crosswind in an Ercoupe. (The three-control airplanes are usually found in heaps on the downwind sides of runways after mishandling, a primitive form of segregation, perhaps.) At first it requires conscious thought, but then something clicks and it seems perfectly normal when in an Ercoupe, but never in any other airplane. By the same token, as you turn downwind while taxiing, the upwind wing will often try to rise. The cure, which emotionally seems to make no sense but works perfectly, is to apply a little brake. The wing will drop and you may complete the rollout with a minimum of fuss.

Taxi in, then shut it down with the magneto switch. No mixture, remember? As the engine makes those pleasant cooling-off noises, realize that you have come to understand the quirks, discovered the fun, and now know exactly why Ercoupe pilots have that Mona Lisa smile.

The aircraft is a two-place, low-wing, single-engine airplane, equipped with fixed tricycle landing gear. This airplane is certificated in the normal category. See the airplane’s P.O.H. for approved maneuvers. The airplane is approved for day and night VFR/IFR operations when properly equipped and certificated.

The airplane is powered by a horizontally opposed, four cylinder, direct drive, normally aspirated, air cooled, carburetor equipped engine. The engine is a Continental Model C90-16F and is rated at 90 horsepower.

Electrical energy is supplied by a 14-volt, direct current system powered by a 20 ampere engine-driven generator and a 12-volt storage battery. A 35 ampere generator is available as optional equipment.