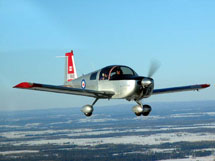 In 1968, as during many periods in general aviation’s life, a few dreamers believed the sport had moved away from the elemental, the basic stick-and-rudder flying, away from the sheer fun of flight. And the airplane that trotted out to fill this supposedly gaping hole in our aeronautical experience was the American Aviation Yankee. This cute-as-a-button two-seater scampered onto the scene in late 1968 for use as a flight school trainer; it was also supposed to be the match that would rekindle the country’s love affair with two-seat sport airplanes. It had (and still has) a youthful kick – something precocious and spunky.

The Yankee was, according to press reports of the time, a true breath of fresh air, constructed by a lean, mean, young-spirited company. Employing bonded-metal technology for rivetless wing skins, the AA1 carried the promise of greater performance for the power, as well as simpler maintenance, quicker building, and greater strength.

Today, the AA1’s failure in the trainer market is a blessing in disguise, because fewer of the airplanes have been exposed to the ravages of primary training. Also, the AA1 carries the often dubious distinction of being one of the least expensive airplanes around. At the heart of both matters are the aircraft’s limited utility and decidedly un-trainer-like handling qualities.

But let’s get to the good news first. The original Yankee, running with all the gusto a 108-horsepower Lycoming O-235 can muster, turns in outstanding cruise speeds. The book calls for 117 knots at 75-percent power, burning 6.3 gallons per hour. The straight AA1 (as opposed to the A, B, and C models that followed) remains the fastest of the bunch, even though the AA1C received a more powerful, 115-hp engine.

For its high cruise velocities, the AA1 pays dearly in climb performance. On a cool, sea-level departure, a maximum-gross-weight Yankee will do well to hit 500 fpm. Its low payload also contributes to its low utility index. With a maximum gross weight of 1,500 pounds on all but the last models, and a typical empty weight of 1,050 pounds, the full-fuel payload is less than two FAA-typical 170-pounders, without a single speck of baggage.

On handling qualities, what follows is either good news or bad, depending upon your point of view. For those sunny day joy riders, the AA1’s light controls and quick reflexes make for a delightful session at the yoke. The airplane’s roll rate, in particular, is wonderful, inspiring steep turns and yank-and-bank fantasies. Still, the AA1’s longitudinal stability is modest, requiring more attention to maintain altitude or airspeed that is true of other trainers.

Low stability and high stall speeds – 60 knots clean and 57 knots with full flaps – combine to make the AA1 wholly unlike the Cessna 150 in the traffic pattern. Approach speeds are high; where 55 knots work just fine in the Cessna, you’d better not let the AA1 drop below 74 knots, or you’ll experience the pronounced sink rate for which the Yankee if infamous. Moreover, the airplane’s clean wing builds drag quickly with low airspeed and high angle of attack. Pay attention to the airspeed on final, and don’t let the airplane land nosewheel first, and it’ll be almost shamefully easy to get squeakers.

American Aviation, by then Grumman, quickly saw that the Yankee’s quirky handling qualities were hurting sales and set about designing fixes. The AA1 A, B, and C models were the result. Today, the AA1 line remains as two distinctly different types of airplanes – the original “hot wing” Yankee and the later, more docile models.

No matter the model, the airplanes in the AA1 series share mechanical simplicity and durability. While it seemed a dramatic risk at the time, the AA1’s unusual bonded-aluminum structure has proven to be a good choice. Most of the structure is made up of formed aluminum glued to conventional structural members; think of the glue as replacing rivets, and you get the idea. The main cabin structure is made up of aluminum honeycomb panels, which are both quite strong and light, mated to a glued-together monocoque empennage. Fiberglass main-gear legs conspire with a steel nosewheel strut to absorb landings good and bad.

Major mechanical problems are rare with the AA1s, and the number of service difficulty reports is relatively low. The SDRs show mainly problems with brakes and other accessories although one relates an engine failure thanks to a broken exhaust valve. The little Lycomings are durable, but they won’t stand for neglect. Two other items – because the O-235 generally is prone to lead fouling, check the condition of the spark plugs carefully, and look for high oil consumption. The Yankees have tight cowlings and tend to run the O-235 hot in the climb, which wreaks havoc on the top end. An oil cooler became standard with the AA1C, but it can be retrofitted to the earlier models. Owners say this is a good investment.

Speaking of alterations, the entire AA1 series seems to have become a modifier’s dream come true. Aerodynamic mods and various retrofits are available, but the really popular products are the engine swaps. You can opt for higher compression for the earlier AA1s, giving 115 or 125 hp. Or you can drop in an O-320 of 150 or 160 hp. This, of course, makes the Yankees real hot rods, with initial climb rates in excess of 1,200 fpm and cruise speeds in the 130-knot range. Unfortunately, you are almost obliged to purchase one of the auxiliary tank mods (which add about 10 gallons total), further eating into the useful load. More that a few 150-hp AA1s are single-pilot mounts.

Ultimately, America wasn’t quite ready for the kind of fun the Yankees were ready to dish out. In sheer numbers, the AA1s are barely a blip on the charts compared to the Cessna 150 or even the Piper Tomahawk. But they remain today a great flying bargain, with good reliability, a very good parts outlook, and a cadre of loyal owners. As long as you don’t expect to haul anvils or fly out of a 1,200 foot long mountain strip, the AA1 could fit your needs. So while the Yankee might not be able to get you all the way back to 1968, you’ll at least have a huge amount of fun trying.

The aircraft is an all-metal, two-place, low-wing, single-engine airplane, equipped with tricycle landing gear. This airplane is certificated in the normal and utility category. See the airplane’s P.O.H. for approved maneuvers. The airplane is approved for day and night VFR operations when equipped in accordance with F.A.R. 91 or F.A.R 135.

The airplane is powered by a horizontally opposed, four cylinder, direct drive, normally aspirated, air cooled, carburetor equipped engine. The engine is a Lycoming Model O-235-C2C and is rated at 108 horsepower.

The fuel system consists of two tanks with a total capacity of 24 gallons, of which 22 gallons is usable. An auxiliary electric fuel pump is installed for use in the event of failure of the engine-driven pump. Fuel pressure is registered on a gauge in the engine gauge cluster. Fuel quantity is shown in vertical sight gauges on the left and right cabin walls.

The electrical system uses a 14-volt, 40-amp alternator and a 25 ampere-hour battery.