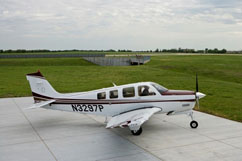 From the original Model 35 (which first flew on December 22, 1945) to the versions rolling off Beech's — now Raytheon's — assembly lines today, the Bonanza has cut a swath through general aviation like a timeshare salesman through a clutch of snowbirds.

To understand the Bonanza, it helps to know something about the period during which it was designed. In postwar America, most aviation companies were staffing up for an expected boom of pilots coming home and demanding new airplanes. During the war, unprecedented research and development in aviation took place, and the state of the art had progressed tremendously since the late 1930s. Walter Beech wanted to take advantage of the knowledge amassed during wartime research and, in particular, to build an aluminum airplane that would be a clean break from the models available before the war and new designs expected to emerge after.

Into this burgeoning marketplace Beech thrust the Bonanza. Distinctive in form and construction, the swift Bonanza offered unmatched-in-class speed and daring good looks. It also embodied some genuinely forward thinking. The tricycle gear, of course, was uncommon at the time. Beech attempted to make it rugged enough to stand up to the many unpaved strips in use then; even the wing's angle of incidence (a lot of it by today's standards) and the gear placement were aimed at making this nosedragger survive cobbly strips. Weight savings were a high priority with the Bonanza, too, leading in part to the distinctive V-tail.

In addition to its distinctive appearance, Beech believed that the V-tail would save weight and possibly create a bit less drag. Wind-tunnel tests then showed that it was comparable to a three- surface design for stability. Later, the V-tail would become the focus of controversy with regard to the airplane's structural integrity. (After decades of 35s breaking up in flight, the matter came to a head in 1987 when extensive wind-tunnel time and flight testing revealed that the tail was not up to certification standards in one corner of the airplane's envelope. Beech had contended all along that the 35s broke up when flown outside the normal speed/G- loading limits; the vast majority of the break-ups came from the ranks of the oldest airplanes. Amid much controversy and hand- wringing, Beech introduced a fix in the form of tail reinforcements- -a leading-edge cuff for some models, with additional stiffeners for others.) Still, the airplane is considered highly desirable, capable of performance in delicate mixture that few other airplanes have achieved.

In 1960, Beech introduced the Model 33 Debonair (name later reverted back to Bonanza), a stripped Bonanza with a conventional tail. Sharing the 35's cabin and wings, the Deb carried a 225-hp Continental IO-470. It sold reasonably well but hardly made a dent in the more desirable Model 35's popularity.

According to Larry Ball, Beech management met repeatedly in the late 1960s and early 1970s to talk about a Bonanza replacement. Engineers at the firm knew that the V-tail airplane's CG and control- authority issues meant that the configuration had reached its maximum potential with the then-current airplane. More power and more weight surely would call for a new design. A cabin-class Bonanza replacement was floated — and a mockup constructed — but it didn't fly past Beech management. (Other design concepts were circulating at Beech in the late 1960s, one a six-place single that looks remarkably like a Piper Malibu.) Ultimately, Beech found the answer to the 35's shortcomings right at home, in the 36. Basically a Model 33 stretched 10 inches ahead of the wing, the 36 went on to become one of the most desirable Bonanzas ever made.

The Bonanza V35A is a four to six-place all-metal, low wing, single-engine airplane with fully retractable, tricycle landing gear.
This airplane is certificated in the utility category. Certain maneuvers as per the aircraft’s POH are permitted. Spins or other aerobatic maneuvers are not allowed. The aircraft is approved for day and night VFR/IFR when properly equipped.

The engine is a Continental Model IO-520-B and is rated at 285 hp at 2700 RPM. It is a six cylinder, normally aspirated, direct drive, air-cooled, horizontally opposed, fuel injected engine.

A 49-gallon standard fuel capacity or an 80-gallon fuel capacity is provided by two rubber fuel cells in the leading edges of the wings. Visual measuring tabs within the optional cells permit the system to be serviced with 60, 70, or 80 gallons of fuel, as desired. The engine-driven fuel injector pump returns approximately 10 gallons of excess fuel per hour to the cell from which fuel is being drawn. Fuel quantity is measured by float type transmitter units, which convey signals to two gauges in the engine gage cluster. The auxiliary fuel pump provides for near maximum engine performance should the engine-driven fuel pump fail.