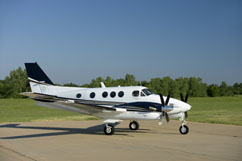 Beech has produced six different basic King Air models, with the 90 series the smallest. The first Model 90 King Air was introduced in 1964; it was basically a Queen Air with turboprops. After its introduction, the 90 series went through a number of airframe and powerplant modifications. The King Air competes with other turboprops such as the MU-2, Conquest, and Cheyenne 400 LS. Beech airplanes are now being built by Hawker Beechcraft Coorporation.

The original Model 90 was powered by a Pratt & Whitney PT6. The PT6A-6 did not have a reverse-pitch prop. Over time, both the engine and the powerplant grew. The A90 came along in 1966 with reverse pitch props, increased cabin pressure (3.1 psi to 4.6 psi), the PT6A-20 engine, and a gross weight increase of 300 pounds. In 1968, the B90 brought an increase in wingspan, recontoured rear fuselage, balanced controls, and a 350-pound gross weight increase. The C90 was next to be introduced in 1971, with a new cabin pressurization system that used bleed air from the engines (which increased cabin noise and reduced engine power). In 1976, the C90 received a new engine, the PT6A-21. Another increase in cabin pressure (to 5 psi), a 15-knot cruise speed increase (due to an increase in the interstage turbine temperature [ITT]), a stronger horizontal stabilizer, and a new cabin door (borrowed from the King Air 200) was introduced in 1982 on the C90-1. The C90A brought redesigned engine cowlings that reduced drag and boosted ram airflow to the engines (resulting in a 12-knot increase in cruise speed), an electrical landing gear system, and a rudder boost system that eased the pilot work load during single-engine operations. Also included on this model (due to concerns about wing strength and cracking wing bolts) was a bonded spar cap, running the length of the wing using shear fittings instead of bolts. The E90 featured a PT6A-28 engine in 1972, and in 1979, the F90 appeared with a T-tail, 750-shp engines, and a 600-pound increase in useful load. The PT6A-135A engine was placed in redesigned cowls, which once more decreased drag and increased ram air recovery, allowing for an increased cruise speed of 15 knots and improved climb/takeoff distance in the F90-1 in 1983. Due to extremely high overhaul costs and difficulty in locating parts, beware when purchasing a King Air with PT6A-6 and -20 engines. Some mechanics even refuse to overhaul the PTA6-6 engines. Parts aren’t generally hard to find for the rest of the King Airs, but they are expensive. A 1,250-hour hot section inspection is recommended. The King Air typically has the club seating arrangement, and a fifth "side-facing" seat is available for the back. Some of the modifications available for the King Air include four-blade Hartzell props, dual aft body strakes, main gear landing doors, wing lockers, and exhaust stack fairings.

When compared to the Mitsubishi MU-2, the Beech King Air has modest performance, not its strong selling point. The King Air is best known for excellent handling characteristics and comfortable, spacious cabin. Pilots describe the controls as "light and pleasant," and the transition from a piston twin to the King Air as relatively easy. In some of the Model 90s, cruise speeds are only slightly over 200 knots. One pilot noted that "above 20,000 feet, performance diminishes." Single-engine performance is described as docile and landing characteristics as good. Cabin noise level is lower than the MU-2.

The King Air F90 is powered by two Pratt and Whitney turboprop PT6A-135 engines, each rated at 750 shp. They are three-stage, axial-flow engines, with a single stage compressor and single-stage reaction turbine. A pneumatic fuel control schedules fuel flow. Propeller speed remains constant within the governing range for any given propeller control lever position.

The airplane fuel system consists of two separate tank systems, one for each engine, connected by a common crossfeed line. Each of the tank systems is further divided into a main and an auxiliary system. Each main system consists of a nacelle tank, two wing leading-edge tanks, all of which gravity feed into the nacelle tanks. Each main system has a total of 194 usable gallons. The auxiliary fuel system consists of a 41-gallon usable fuel tank located in the wing inboard of the engine nacelle. It employs an automatic fuel transfer system to supply the fuel to the main system. Each engine drives a high-pressure fuel pump and a low-pressure boost pump. In addition, and electrically driven low-pressure standby boost pump is in the bottom of each nacelle tank.

The airplane electrical system is a 28-VDC system which receives power from a 24-volt, 34-ampere hour nicad battery, two 250-ampere starter-generators, or through an external power receptacle. A hot battery bus is provided to power certain convenience lights, emergency equipment, and other items. These items have power available at all times, regardless of the BATT switch position.