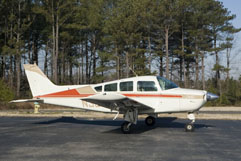 Beech Aircraft’s Sierra, like most general aviation aircraft produced today, gradually evolved from a design two decades old. It is an outgrowth of the Beech Model 23 Musketeer, which was introduced in 1963 to provide Beech with an entry-level airplane. The Musketeer line was dolled up in the early 1970s to aid in marketing the aircraft that would, ideally, entice the pilot with Beech Aircraft Company products from a start in the trainer (the Sport), to the basic fixed-gear airplane (the Sundowner) to the retractable, cross-country airplane (the Sierra).

The Sierra fits into the training program because it qualifies as a complex aircraft, in which commercial students must spend 10 hours of their training. It also serves as a rental aircraft for club members.

The Sierra is a solid, comfortable airplane that is pleasant to fly, and manages a respectable 140 knots true. There are also a number of lesser aesthetic and intangible qualities that might sway a prospective purchaser or renter.

The dual wing spar structure consists of a rear spar of conventional stamped aluminum and a forward spar of stronger extruded aluminum. The gear, made from magnesium casting and aluminum forgings, is attached directly to the spar, which contributes to the strength of the structure, according to a Beech spokesman.

When Beech introduced the Musketeer in the early 1960s, the use of bonded honeycomb structure in a light plane was unusual. The forward half of the laminar-flow wing is aluminum and honeycomb bonded with epoxy resin. Beech had used the honeycomb technology extensively in its aerospace work.

The Sierra is a large aircraft, with a high stance. The cabin is larger than others in its class. With solidarity and size come comfort. Pilots from five feet three inches to six feet three inches tall have remarked about its spaciousness for larger pilots yet accessibility for shorter operators. In spite of the spaciousness, however, the control wheel is placed a little low on the panel, and knees tend to get in the way more than they usually do with the competition.

The wing spar runs under the seat, a significant advantage for the pilot, as the placement of the wing so far aft allows a good view down from the front seats, an unusual bonus for a low-wing aircraft. Visibility forward and to the sides is equally good.

Speed may not be the Sierra’s forte, but the brand-new one I flew performed consistently better than what the book called for, and this was with two chunky Beech fiftieth anniversary gold medallions glued to either side of the cowling, which should have slowed it down if anything. On most of the trip, I ran at 140 knots at 75-percent power. Since the engine had less than 50 hours when I started out, I did not run any checks at lower power settings. Fuel consumption averaged 10.3 gph.

The Sierra handles well in the air. Although aileron control is slightly stiff, it is not heavy; neither is the stabilator. On the whole, handling is sprightly, but one should not expect a baby Bonanza; the Sierra does not have the same crisp handling. Stalls provide a definite, but gentle, break, but the high stall speed (60 knots dirty) should be kept in mind. Altitude loss was minimal.

Although the Sierra does not carry the reputation of being a hot ship to land, it is not an easy-landing airplane. In the Sierra, the pilot may tend to flare to high, and it is difficult to get the feel of the airplane. Though, a couple circuits of practice landings will have the pilot who usually greases it on proficient in the Sierra as well.

For the pilot who likes Beech quality, comfort and manageability but not new aircraft prices, the Sierra is a good buy.

The aircraft is powered by a Lycoming IO-360-A2B and is rated at 200 horsepower. It is a four cylinder, normally aspirated, direct drive, air cooled, horizontally opposed, fuel injected engine.

Fuel tanks located in each wing leading edge have a nominal capacity of 29.9 gallons. In the filler neck of each tank is a visual measuring tab which permits partial filling of the fuel system. When the fuel touches the bottom of the tab it indicates 15 gallons of fuel, and when filled to the slot in the tab it indicates 20 gallons of fuel. The indicating system reads full at 20 gallons. The pilot must visually check the fuel level during preflight to ascertain desired level. Fuel is fed from the desired tank through a fuel selector valve in the center floorboard and then through a strainer to the engine-driven fuel pump. An electric fuel boost pump is provided for use when needed. Fuel quantity is measured by a float-operated sensor, located in each wing tank system.

The electrical system is powered by an alternator and a 12-volt battery. The system circuitry is the single-wire, ground-return type, with the airplane structure used as the ground return.