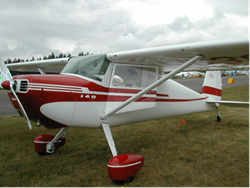 Pilots who have an eye for form and function will probably agree that the Cessna 120 and its sibling, the 140, are airplanes that have eye appeal. The rounded rudder, conventional landing gear, and overall proportions create the classic lightplane look. When Cessna flooded the lightplane market with these beauties following the end of World War II, few people realized how important this honest little airplane would turn out to be in the history and development of the Cessna Airplane Company.

The 140 and its lean little brother, the 120, jump-started Cessna's transition to a peacetime business after World War II. Between 1946 and 1951, when production of the 140 ended, more than 7,500 of these airplanes had rolled out the doors in Wichita. Not only did this airplane provide a tremendous economic boost for postwar Cessna, the design also helped establish the strut-braced single-engine line of Cessnas as airframes that could, to borrow a line from Timex, "take a licking and keep on ticking."

The stark little 120 listed at $2,695. The 140 differed from the 120 since it was equipped with an electrical system, featuring a Delco Remy generator and a pull cable-actuated starter, split-type wing flaps, quarter windows behind each door, and tube-and-fabric wings. The list price for a 140 was $2,995. The airplanes were an immediate success.

By all accounts the engineers at Cessna designed an honest, well-mannered airplane. Leighton Collins, in an April 1, 1946, article in Air Facts, said this about an early 140: "The stability situation, then, would seem to be that it is about evenly apportioned around the three axes and is just a little more than neutral. That makes for a ship which doesn't overwork you in rough air, one which is responsive, and one which is nice on instruments." In other words, the 140 flies well and doesn't have any designed-in bad habits, although changing to metal wings removes some of the aileron response, according to David Lowe (past president of the International Cessna 120/140 Association and an experienced 120/140 mechanic).

Depending on the engine (STCs are available for up to 135 hp) and the propeller installed, cruising fuel consumption ranges from around five to seven gallons per hour, with a clean, straight airplane achieving cruise speeds of about 105 to 110 mph (91 to 95 kt). With 25 gallons of fuel, this translates to about four and a half hours of duration and a 500-statute-mile range. The operation manual, a book from a simpler time, lists 21.5 miles per gallon at 2,400 rpm in the performance charts. 140A models, and 140s with larger engines and cruise props, reportedly clip along at up to 125 mph (108 kt).

The 120 had no flaps, but in reality the split-type flaps on the 140 weren't much more than small speed brakes. Pilots transitioning from Cessnas equipped with the powerful Fowler-type flaps that are standard equipment on all Cessna singles built from the mid-1950s on will have to develop some new speed-control discipline if they want to consistently show off their spot-landing skills. Accordingly, the rudder has enough power to make speed control via the sideslip method a routine matter.

The 120, 140, and 140A all exhibit good manners on the ground and have enough rudder authority to handle most crosswind situations with aplomb. Pilots who are always conscious of the wind direction and counter these conditions with the correct control inputs find that this airplane does not make them look bad, or swap ends unexpectedly on the ground. In spite of the airplane's capabilities, Lowe suggests that 100 percent of the fleet has probably been ground looped at least once over the past 50 years.

If a pilot somehow ground loops his 140 at any more than taxi speeds, it's probable that the landing gear boxes in the fuselage will be damaged. The spring-steel landing gear is a low-drag and low-maintenance system, but this is offset by the fact that these legs are stronger than the gear boxes that support them. Inspection of the front doorpost/gear box area is critical during all prepurchase and annual inspections. The airframe is easy to repair and if the repair is done well, it will be almost undetectable and the airplane will fly fine.

Unlike some older lightplanes, the parts situation for these small Cessnas isn't critical. Univair, a company in Aurora, Colorado ( www.univair.com), and Wag-Aero, of Lyons, Wisconsin ( www.wagaero.com), both supply high-quality parts for repair and refurbishment. For instance, both left and right gear box assemblies, new cowling assemblies, and other often-needed and hard-to-manufacture parts are almost always in stock.

The supply of serviceable crankshafts for the original C-85 series of Continental engines is drying up, so a couple of companies have STCs that permit the use of an O-200 crankshaft in these engines. STCs are available for the installation of the 100-hp Continental O-200, the 108-hp Lycoming O-235, and the 135-hp Lycoming O-290. Engine cylinders are often repairable, or new ones are available (except for the O-290), from Engine Components Inc. ( www.eci2fly.com) or from Lycoming or Continental at reasonable prices.

Make no mistake, the 120 and the 140 are some of the lightest of lightplanes, grossing out at 1,450 pounds, or 1,500 pounds for the 140A. Even at this light weight, the Cessna 140-series airplanes are sturdy, economical, well-mannered little taildraggers that are fun to fly and pleasing to the eye.

The 140A is an all metal, two place, high wing, single engine airplane equipped with conventional landing gear and designed for general utility purposes.

The airplane is certified in the utility category. The airplane is not designed for purely acrobatic flight. However, certain maneuvers are permitted as per the aircraft’s P.O.H. The airplane is approved for day and night VFR/IFR operations when equipped in accordance with F.A.R. 91 or F.A.R 135.

The aircraft is powered by a four cylinder, horizontally opposed, normally aspirated, direct drive, air cooled, carburetor equipped engine. The engine is a Continental Model C-90 and is rated at 85 hp.