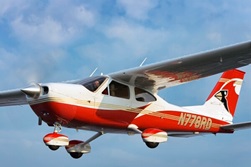 The Cardinal story begins with a plot as optimistic as a bird in springtime. It's the mid-1960s, glory years in civil aviation. The economy is strong, gas is cheap, and a surfeit of pilots from World War II and the Korean War are finding happiness in peacetime skies and teaching their friends and family to fly in record numbers.
So let's say you're with the Cessna Aircraft Company, and you know you have a good thing going with the venerable 172. But you and your colleagues want to keep the excitement alive, so your team designs a new airplane that answers your customers' desires. Of course, you want to do it cost-effectively, so you base a lot of decisions on the success you've had while building the 172. Chiefly, you place an order for the same engine — 2,000 150-horsepower Lycoming O-320-E2Ds — assuming it will power this new bird just as adequately as it did the 172.

In most respects, you hit the mark. The new Cessna 177 Cardinal — with its cantilever, laminar-flow wing offering terrific visibility — is a doll to fly, a step above its trusty-yet-pedestrian predecessor. Stepping into the Cardinal is more like sliding into a sedan than climbing into a pickup. A wide panel holds all the latest avionics — we're in 1968, so that includes a choice of ARC, King, or Narco nav/coms and a Nav-O-Matic autopilot. An audio panel and marker beacons are popular options for the IFR cross-country fliers you aim to please. And a large ashtray just right for cradling their Swisher Sweet cigarillos completes the sedan-style surroundings.

But that engine? Big mistake. It can hardly pull this flying Caddy up a Kansas hill.

Luckily, you quickly realize your mistake and set about making the airplane as harmonious as its rakish good looks suggest.
These days, if you're going to buy a Cardinal — and there are lots of great reasons to make this your airplane of choice — by all means buy one with more than 150 hp. Cessna understood its error and with the second year's model (1969) swapped the O-320 for a 180-hp Lycoming O-360-A2F, keeping the fixed-pitch propeller. The match made the design take to the skies in keeping with its swept style and sleek looks. Since then, most 1968 models have been upgraded to beefier engines as well. The design also went through some other modifications late in the 1968 model year, as part of "Operation Cardinal Rule." The program made 23 upgrades to the original aircraft — in particular, slots were added to the stabilator to improve landing characteristics.

The 177's cantilever, laminar-flow wing is similar to that on the Cessna 210, and it is positioned far enough aft to allow the pilot greater visibility than in previous high-wing airplanes. The strutless design clears the view out of the side. And the view out the front window is fantastic, recalling current composite airplanes with wraparound windshields.
Because the resulting center of lift is further from the center of gravity, the elevator needs enough oomph to counteract the "heavier" nose. So the Cardinal has a stabilator, as opposed to the horizontal stabilizer/elevator combination found on the other Cessna 100-series models. Because the entire horizontal airfoil moves with back-and-forward motion of the control wheel, pitch response is immediate and the amount of change larger. The stabilator is more "powerful" than other tailfeather designs, and leaves some pilots — particlarly those accustomed to the delayed response of the Skyhawk — apprehensive about its quick action and their own subsequent tendency to overcontrol in the flare. As pilots grow more accustomed to the stabilator design, this problem dissolves. However, the stabilator requires additional maintenance.

Control forces in the Cardinal are wonderfully balanced — as the airplane speeds up in cruise, the stick becomes heavier, making smooth adjustments easy. In the pattern, once you get the bird slowed down (Cardinal RG pilots especially must plan ahead for the descent), control forces lighten to make maneuvering a breeze.

In 1970, the sharp leading edges on Cardinal wings transformed to a blunter shape, creating a more docile airfoil. Now pilots could pull back on the stick abruptly without the higher drag and reduced acceleration common to laminar-flow wings — and it paid off in smoother takeoffs. The change to the airfoil eliminated the stall strips required previously. This model year also saw a redesigned cowl, the addition of cowl flaps, and the move to a constant-speed propeller.

The engine went through one more change in 1973, to a dual-magneto system in the Lycoming O-360-A1F6 "D." The cowl bore another iteration that removed the flat plate area from under the spinner, which Cessna claimed reduced drag to the tune of three extra knots. Optional 60-gallon fuel tanks and improved door sealing rounded out the year's updates. In 1975, a new prop allowed for higher continuous rpm, up to 2,700 rpm. This meant 75-percent power could be carried up to 10,000 feet, for higher cruise speeds at that altitude. In 1978, the last run of Cardinals got a 28-volt electrical system.

The Cardinal RG debuted in 1971 with a 200-hp Lycoming IO-360-A1B6 and benefited from the straight-leg's permutations. Few changes were made through the 1978 model year — also the last for the RGs — with the exception of a similar "D" engine-model update and 60-gallon tank option in 1973.

Every airplane has its fan club, but arguably few are as close-knit and attentive to detail as the Cardinal Flyers Online. If you're thinking of buying a Cardinal, go to the CFO Web site ( www.cardinalflyers.com) and get to know the clan.

The 177 is an all metal, two place, high wing, single engine airplane equipped with tricycle landing gear and designed for general utility purposes.

The airplane is certified in both the normal and utility category. The normal category is applicable to aircraft intended for non-aerobatic operations. These include any maneuvers incidental to normal flying, stalls (except whip stalls) and turns in which the angle of bank in not more than 60Âº. In the utility category certain maneuvers are approved as per the POH. The aircraft is equipped for day VFR and may be equipped for night VFR and/or IFR operations.

The aircraft is powered by a four cylinder, horizontally opposed, normally aspirated, direct drive, air cooled, carburetor equipped engine. The engine is a Lycoming Model O-360-A1F6D and is rated at 180 hp.

Fuel is supplied to the engine from two 25 gallon tanks, one in each wing. Fuel flows by gravity from the two integral tanks through a three- position selector valve. From the selector valve, fuel flows to a reservoir tank and a shutoff valve. Fuel will then flow through the strainer to an engine-driven fuel pump, or an electric fuel pump which parallels the engine driven pump and is used in the event the fuel pressure drops below 2 psi. Fuel capacity can be increased to 61 gallons total volume with the optional long range system.

Electrical energy is supplied by a 14-volt, direct-current system powered by an engine-driven, 60-amp alternator and a 12-volt, 33-amp hour battery.