Get the app Get the app
Already a member? Please login below for an enhanced experience. Not a member? Join today
We will be performing maintenance on our systems Sunday 9/19 from 12am to 6am ET. During this time, you may experience intermittent service outages. We appreciate your patience.
Pilot Resources Aircraft & Ownership Aircraft Fact Sheets Cessna 205/206 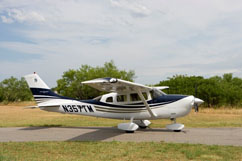 Remember when you received your private certificate and could not wait until you checked out in a four-place airplane? Only to find out that you could not fill up all the seats and the fuel tanks and be able to give all your friends a ride?

The same dilemma faces small air taxi operations, private companies and others who need to move people or cargo the most efficient way possible. The Cessna 205/206 solves this problem. Able to handle both big loads and short, unimproved strips, they can be found hard at work everywhere, be it jungle, tundra, mountains, or anything in between.

In 1964 the 206 arrived: 205 airframe, 15 additional horsepower thanks to the 285-hp Continental IO-520 engine. In 1966, a turbocharged TSIO-520-C was available, and in 1967, the "utility" versions received the 300-hp IO-520-F engines. The turbocharged engine received another upgrade in 1977 when the 310-hp TSIO-520-M engine was introduced. The IO-550-F, which includes an automatic, altitude-compensating fuel pump and beefed-up crankcase, was another engine option that had no time limitations on its maximum power rating and offered greater propeller efficiency, more pulling power, lower noise levels, reduced airframe vibrations, and limited prop tip erosion. The -550 has reduced maintenance when compared to the turbocharged 206s, and fewer crankcase cracks than the IO-520-F. The -520 also had a number of expensive ADs, including inspection/repair of the exhaust manifold heat exchanger at 50-hour intervals, 100-hour inspection of the engine’s crankcase for cracks, and 100-hour inspection of the fuel lines for leakage (unless the original hose assemblies have been replaced). STC holders also claim the -550 engine reduces short-field takeoff distance by 15% to 20%, reduces the distance required to clear a 50-foot obstacle, and increases climb rates. Similar to Cessna 205s and 210s, the Cessna 206 fuel systems have a main tank in each wing. Fuel can be drawn from either tank, but not both simultaneously. During high-temperature or high-altitude conditions, the system has problems purging vapor from the reservoir tanks, sending fuel vapor to the engine, causing engine stoppage. Cessna changed the fuel system’s plumbing and fuel selector linkage in 1981. Several modifications available for the 206 include seaplane conversions, STOL kits, belly-mounted cargo pods, wing-tip auxiliary fuel tanks, blister windows, propeller anti-icing, Bendix RDR-160 color weather radar, and camera ports. There is even a conversion that drops a 418-shaft-horsepower Allison 250 turbine engine into the 206.

The Cessna 205/206 has a number of features that combine to make it one of the most popular of the large Cessna singles. More than 7,000 units of one description or another (they have been

called Stationair 6s since 1977) have been sold to date. The 205/206 has the same configuration — high-wing, strut-braced, fixed gear — as the rest of the Cessna single-engine line. The aircraft’s dimensions are nearly identical to those of the Cessna 182; to an untrained eye, they easily can be mistaken for one another. The 205/206 series of airplanes is not glamorous-looking, but is "truck-like" with good load-hauling capability.

Ask 205/206 owners why they were drawn to such ordinary-looking airplanes, and the answer will nearly always center on load-hauling capability. Both airplanes have generous weight and balance limitations, and generally, filling the seats will not require an hour's worth of calculator time to keep the airplane in the envelope. With a useful load of 1,500 to 1,800 lbs. depending on the model, the aircraft competes with most other heavy singles and many light twins. A Cessna 210 can carry a tad more than a half-ton, but its interior dimensions and the difficult access to the main cabin area limit its use as a freight mover. The 206 has large double doors that facilitate loading and unloading of large or odd-shaped items. Unfortunately, the 205 only has a single door for loading purposes. The Cessna 182 carries a heavy load as well, but its cabin is shorter and it, too, lacks easy access to the aft cabin.

Moving into the 205/206 from one of Cessna's smaller airplanes is easier. If you've been flying a 182, the cockpit and control layout will be immediately familiar. It should-the airplanes are nearly identical in this respect. Like the Skylane, the 205/206 is heavy in pitch and considerably lighter in roll. With a forward CG, considerable back pressure is required for takeoff rotation and landing flare. To make room for larger flaps (they continue outward past the wing's taper point on the 206, unlike those on other single-engine Cessnas), the 206 employs Frise ailerons that are smaller than the simple piano-hinge affairs on the 182. Owners have called the 205/206 "exceptionally" stable during turbulent conditions.”

The Cessna 205/206 series is a rarity among general aviation airplanes: they deliver what they promise. Unlike so many other piston singles and twins, you really can fill the tanks, (usable fuel ranges from 59 gallons with standard tanks to 88 gallons with long-range tanks, depending on the year and model), load up all six to eight seats, and take off without busting maximum gross weight or the generous center of gravity envelope. The 205/206 has justly earned its reputation as a half-ton pickup.

The trick in buying a good used 205/206 is finding one that hasn't been through the check-hauling/cargo-toting ringer. Both airplanes have been immensely popular in those roles, and finding a relatively low-time example might entail some footwork.

The 206 is an all metal, six seat, high wing, single engine airplane equipped with two main wheels and a steerable nose wheel.

This airplane is certified in the normal category. The normal category is applicable to airplanes intended for non-aerobatic operations. These include any maneuvers incidental to normal flying, stalls (except whip stalls) and turns in which the angle of bank is not more than 60Âº. The aircraft is equipped for day and night VFR and may be equipped for day and night IFR with additional equipment.

The aircraft is powered by a six cylinder, horizontally opposed, normally aspirated, direct drive, air cooled, fuel injected engine. The engine is a Continental Model IO-520-F and is rated at 285/300 hp.

Fuel is supplied to the engine from two tanks, one in each wing. Usable fuel in each tank, for all flight conditions, is 31.5 gallons for standard tanks and 40 gallons for long range tanks. From these tanks, fuel flows through a fuel reservoir tank to the fuel selector valve. Depending upon the setting of the selector valve (fuel cannot be used from both fuel tanks simultaneously), fuel from the left or right tank flows through a by-pass in the electric auxiliary fuel pump and fuel strainer to the engine-driven fuel pump. From here fuel is distributed to the engine cylinders via a fuel control unit and manifold. Vapor and excess fuel from the engine-driven fuel pump and fuel control unit are returned by way of the selector valve to the reservoir tank of the wing system being used.

Electrical energy is supplied by a 14-volt, direct-current system powered by an engine-driven alternator and a 12-volt storage battery. An optional 28-volt direct current system is also available.