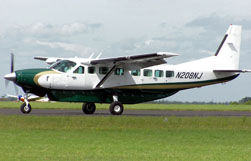 The Caravan I, also known as the Model 208, was introduced in 1985 as a simple load-hauler, built for rugged operations in jungle clearings and desert strips of third-world countries. Cessna intended the aircraft to replace aging fleets of Beech 18s, Beavers, Otters, and other utility cargo-haulers. The Caravan was designed for simplicity, relatively low maintenance costs, field maintainability, and redundancy. It is available in a "short" passenger/cargo model (Caravan I), "short" version without windows (Caravan I Cargomaster), and a "long" version without windows (Caravan Super Cargomaster). The Caravan II, produced only by Reims Aviation, S.A. (Cessna’s associate company in France), is not really a Caravan; it’s a 400-series fuselage with a turboprop powerplant, and there are only a handful in the United States.

General Aviation News & Flyer calls the Cessna Caravan a "well-built machine." The basic structure is all metal, with a strut-brace high wing, tricycle landing gear, and a single 3,500-hour TBO Pratt & Whitney PT6-114 engine flat-rated at 600 shp. Aero magazine calls the landing gear "beefy." The Caravan was originally fitted with a three-blade composite Hartzell propeller but later switched to a three-blade McCauley. Engine gauges are across the top of the panel; switches for light and deicing equipment are below and to the left of the flight instruments. A subpanel on the far left of the cockpit, out of copilot reach, holds the switches for starting, fuel pump, and generator activation. There is an annunciator light for virtually everything, color-coded for the degree of panic. The Caravan has a conventional control configuration, with all primary controls operated by cables and rods. There are four levers on the throttle quadrant: From left to right is an emergency power lever, power lever (throttle), condition lever (prop rpm), and flap selector. In its commercial operator configuration, the Caravan has room for 14 seats, although FAA certification requirements limit U.S. models to 10. The Model 208A, as ordered by Federal Express for package-carrying operations, has a belly pod and no windows aft of the pilot’s doors. The seats are described as comfortably utilitarian, but the shoulder harness, which in some models is permanently stitched to the lap belt, may not be close enough at the belt to properly restrain a torso. Visibility is reported as "superb." Two integral fuel tanks with 166 gallons usable fuel gravity feed to a reservoir tank below the floorboards forward of the main landing gear. Extension of the wing flaps does not interfere with the baggage door’s operation. Bowline floor tracks allow easy rearranging for various cabin configurations. Optional equipment includes electrically heated propeller boots, detachable heated windshield panel, airframe deicing boots, copilot instruments, freon-cycle air conditioning, and weather radar. Standard equipment includes a 300-series Sperry/ARC nav/com, ADF, and transponder. Reliability of the powerplant, its subsystems, and the electrical system has enabled FedEx and Bendix/King to gain full CAT-II certification.

AOPA Pilot magazine called the Caravan I "easy and pleasant" to handle. It can go 186 knots at 10,000 feet for a distance of almost 1,000 nautical miles with a 45-minute reserve. The sea-level rate of climb can be as high as 1,446 fpm. The stall speed varies from 55 to 64 knots and is described as the typical docile Cessna stall. Flare and touchdowns were reported to be "gentle and controlled." Maximum useful load is 3,627 pounds. Reverse thrust is available for slowing but is not recommended for backing the aircraft. Little right rudder is needed on takeoff, thanks to the engine being canted slightly downward and to the right to minimize torque and p-factor.

Over the years, Cessna has proven adept at designing, manufacturing, and selling airplanes of all shapes, sizes, and purposes. They've had winners in all categories, from trainers to business jets to family wagons. With the entire Caravan utility series, Cessna is expanding its scope and extending its streak.
Cessna Caravan
Brooks Whitney, FIT, March 1998

The airplane is an all-metal, high-wing, single-engine turboprop airplane equipped with tricycle landing gear and designed for general utility purposes. Standard seating consists of both a pilot’s and front passenger’s six way adjustable seat. Additional cabin seating is available on the Passenger version which consists of three rows of two place fixed seats and two rows of two place fixed seats and two rows of one-place fixed seats in the Commuter configuration, or four rows of one-place, fixed-position collapsible seats on each side of the cabin in the Utility configuration. This airplane is certified in the normal category. In the normal category all aerobatic maneuvers including spins are prohibited. The airplane is approved for day and night VFR/IFR operations and for flight-into-known icing conditions when equipped in accordance with F.A.R. 91 or F.A.R 135. The Caravan is powered by a Pratt and Whitney Canada Inc. PT6A-114A free turbine engine and is rated at 675 shp. It utilizes two independent turbines; one driving a compressor in the gas generator section, and the second driving a reduction gearing for the propeller. The engine fuel system consists of two 167.9 gallon vented, integral fuel tanks with shutoff valves, a fuel selectors off warning system, a fuel reservoir, an ejector fuel pump, an electric auxiliary boost pump, a reservoir manifold assemble, a firewall shutoff valve, a fuel filter, an oil-to-fuel heater, an engine-driven fuel pump, a fuel control unit, a flow divider, duel manifolds, and 14 fuel nozzle assemblies. Fuel flows from the tanks through the two fuel tank shutoff valves at each tank. Fuel flows by gravity from the shutoff valves in each tank to the fuel reservoir. The reservoir is located at the low point in the fuel system which maintains a head of fuel around the ejector boost pump and auxiliary boost pump which are contained within the reservoir. This head of fuel prevents pump cavitation in low-fuel quantity situations especially during inflight maneuvering. Fuel in the reservoir is pumped by the ejector boost pump or by the electric auxiliary boost pump to the reservoir manifold assembly. The ejector boost pump, which is driven by motive fuel flow from the fuel control unit, normally provides fuel flow when the engine is operating. In the event of failure of the ejector boost pump, the electric boost pump will automatically turn on, thereby supplying fuel flow to the engine. The starter/generator is mounted on the top of the accessory case at the rear of the engine. The starter/generator is a 28-volt, 200-amp engine-driven unit that functions as a motor for engine starting and, after engine start, as a generator for the airplane electrical system.