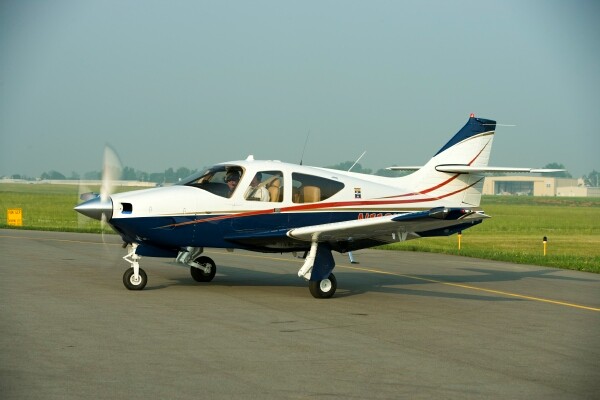 In this era of a declining pilot population, airframe marketers have begun to look outside the traditional marketplace for new customers. One of the most aggressive in this approach is Commander Aircraft Company. Advertisements for the Commander 114B four-place, single-engine airplane routinely appear in such publications as The Wall Street Journal, Forbes, and Fortune. Commander Chairman Wirt D. Walker III believes that small- to medium-sized companies in small- and medium-sized cities with poor or no airline service are a prime market for the 114B.

An example used in the marketing program is a company located in Peoria, Illinois, with meetings scheduled in Decatur and Chicago. Round robin travel time on the Commander is 2.5 hours, including a stop in St. Louis, versus 4.8 hours on the airlines.

The lowest coach airline fare available in November 1993, when the study was done, totaled $888. Commander is quick to point out that the 114B's costs remain at $170 or thereabouts, whether one or four company employees make the trip. Four travelers on the airlines would drive the ticket prices to $3,552.

Not included in Commander's operating costs, of course, are initial acquisition and finance charges. Even then, though, the company makes an interesting case in favor of owning an airplane. The detailed cash flow analysis assumes a company would sell the airplane after seven years, the point at which it would be fully depreciated. Based on that and assuming a resale at 60 percent of purchase price, which is reasonable, a very nicely equipped $335,000 airplane can be used for seven years for a total outlay of about $132,000, or about $20,000 a year.

It's a lot of money, for sure, but about on par with other new airplanes in the class and a bit easier to justify when you can have the government help pay for it through depreciation and tax deductions.

For the money, though, the 114B buyer gets a lot of airplane, both figuratively and literally.
Sitting on the ramp, the Commander is an impressive looking airplane. All but the tallest pilots can walk under the cruciform tail. The tall and stout trailing link main landing gear, complete with taxi lights, look as if they might have come off a twin turboprop or jet. With its three-blade McCauley propeller, tightly cowled engine, and sloped windshield, the 114B appears ready to leap off the ramp.

On the outside, the 114B looks much like its 114A and 114 cousins built in the mid- to late 1970s by Rockwell International. In fact, only the practiced eye can tell the difference between the 200- and 210- horsepower 112s and 112TCs of the '70s and the equivalent-era 260-hp 114s. The similar 260-hp Lycoming IO-540 in today's 114B, though, is tucked into a more shapely and
tightly cowled nose section.
After buying the rights to the 114, Commander located its production facilities in Bethany, just down the ramp from where Rockwell had originally produced the airplanes.
The new Commander company received a type certificate for the 114B in 1992 and since has produced 92 airplanes, according to Gene Criss, Commander's president. Nine of the airplanes are still owned by Commander and 11 are owned by Commander International Limited, a sister company that markets the airplanes in the Middle East.

Though the company has not seen sales skyrocket over the last few years, Walker asserts that it is in the business to stay, "we're on a crusade to bring the benefits of aircraft ownership to the small- to medium-sized business owner. You don't have to be a pilot. You don't have to have a flight department. We provide a turnkey operation," he preaches, referring to Commander's "Aircraft Ownership Program."

The program offers prospective customers everything necessary to buy and fly a 114B, including cost/benefit assessments, financing, and insurance. The company can also help arrange hangar and tiedown space, maintenance services, and fuel. And, if the buyer is not a pilot, Commander will arrange for a professional pilot to fly the airplane and a flight instructor to teach the new owner to fly, if desired.

Commander has had limited success so far in selling the 114Bs to small companies with no previous aviation experience. Most of its customers are from the more traditional general aviation marketplace — pilots moving up from lighter airplanes or pilots making their first airplane purchase. Using FAA aircraft registration data, we contacted some 114B owners.
William H. Flores of Sugar Land, Texas, for example, bought a 114B company demonstrator. Since then he has put 225 hours on the airplane and raves about the comfort and attention to detail inside. "It's like buying a Lexus or Corvette," he says. He routinely loads the airplane with two adults and two kids and lots of luggage for vacation trips and long weekends. He has been pleased with the airplane's reliability and performance. There have been a couple of minor squawks in the nearly 18 months he's owned the 114B (a broken door latch, shoulder belt retractor, and beacon).
Flores flight plans 150 knots, but usually sees a bit better performance than that. Commander claims a 75-percent cruise of 160 knots, about 10 knots faster than the original 114s would fly. On our demonstration flight, we saw 154 knots true airspeed at 3,500 feet.
Likewise, Daniel and Bonnie Williams, owners of a 1994 114B, flight plan about 150 KTAS on 65-percent power and about 12 gph. The couple, both VFR pilots, previously owned an Aerospatiale TB-10 Tobago, but were looking for more performance. However, they didn't want to give up the two doors and wide cabin they had enjoyed on the Tobago.

The couple often uses the 114B for long cross-country flights from their base at Accomack County (Virginia) Airport on the Delmarva Peninsula. Frequent destinations are in Florida, Oklahoma, and Texas. To make it a true two-pilot airplane, Daniel had a heading indicator, altimeter, and turn coordinator installed on the right panel. He says he usually gets to fly left seat, but "only because I hide the keys." He estimates about 10 to 15 percent of his flying is for his business, Altair Turbine Services, a turbine engine overhaul facility. Like other owners we spoke with, Daniel is enamored of the 114B. "I'd be hard pressed to say anything negative about the airplane."

Indeed, the 114B is an elegant compromise between comfort and performance. The wide cabin and plush leather seats swaddle the passengers and pilot in comfort. Headroom is excellent and the view through the expansive windows is unsurpassed. Because the seats sit high and the cowling slopes away, over-the-nose visibility is very good in the climb. Rear seat passengers have a comfortably wide cabin, but legroom is a bit tight if the front seaters are long legged. A large baggage door on the left side makes it easy to load up the commodious stowage space behind the back seats.

The modern-looking metal panel provides plenty of space for avionics — which, as noted earlier, most customers take advantage of.

The tradeoff for the wide cabin is a slower cruise speed than most other airplanes in the competition. The Bonanzas, Mooney TLSs or Ovations, Bellancas, and even Piper Saratogas of the world will beat the Commander by anywhere from five to 55 knots. Of course, the other airplanes are also using anywhere from 10 to 40 more horsepower to get that speed.

To at least somewhat mitigate the performance difference, Commander is scheduled to certify a turbocharged variant of the 114B, called the 114TC, by mid-May.
Another improvement already available is a unique air conditioning system. The CFC-free air conditioner is powered by a dedicated 130-amp alternator. In normal use, the second alternator is isolated from the rest of the electrics and drives only the a/c. However, if the primary alternator fails, the pilot can bring the secondary alternator on line to power the avionics, instruments, and lights. In addition, the a/c can be run on the ramp with a ground power unit. According to Criss, the system was designed with Middle Eastern customers in mind and will effectively cool the 114B, even on a 125-degree day.

The Commander's handling characteristics would make it an excellent trainer for pilots intent on moving into turbine airplanes. Because the cruciform tail is high enough to be out of the propwash, the Commander shares some handling characteristics with jets. For example, it requires a definite rotation to get the nose up for takeoff; in fact, most newcomers to the Commander will tend to overrotate. In flight, flap deployment causes almost no pitch change. On landing, the Commander should be brought in rather flat, with just a slight flare to keep the nosewheel from touching down first. The trailing link mains smooth out even the best efforts at dropping the 114B onto the runway.

With its big-airplane systems and feel, the Commander 114B is beginning to command the attention of buyers in the traditional general aviation market and, thanks to the company's aggressive promotions, in less-traditional markets, as well. For potential aircraft owners in either market who are in search of a fresh face, Commander is a welcome contender.

The Commander 114B is a 4 place, all-metal, low wing, single-engine airplane, with retractable tricycle landing gear.
This airplane is certificated in the normal category. See the airplane’s P.O.H. for approved maneuvers. The airplane is approved for day and night VFR/IFR operations when properly equipped and certificated.

The airplane is powered by a horizontally opposed, six cylinder, direct drive, normally aspirated, air cooled, fuel injected engine. The engine is a Lycoming IO-540-T4B5 and is rated at 260 horsepower.

Fuel is supplied to the engine by two integral fuel tanks, one in the forward section of each wing. The fuel capacity is 35 U.S. gallons for each wing tank, 34 of which are considered usable. A reduced fuel load indicator is located in the filler neck, which indicates a usable fuel capacity of 24 U.S. gallons. From the wing tanks, fuel flow is directed through a selector valve, gascolator, electric fuel pump (with bypass), and engine-driven fuel pump for delivery to the fuel injector unit. A five position fuel selector valve controls selection of; OFF, LEFT tank, BOTH tanks, RIGHT tank, and a second OFF position. An electric auxiliary fuel pump is provided and is used as a boost pump in starting and in the event of engine-driven fuel pump failure.

The airplane is equipped with a 28 volt direct current electrical system powered by a 28 volt, 63 amp engine driven alternator. A 24 volt lead-acid battery provides power for engine starting and acts as a backup power source.