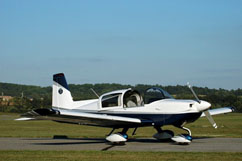 When Grumman American dealers converged on headquarters in Cleveland for the annual round of executive horn tooting last fall, constant reference was made to the, ahem, Big Surprise everyone already knew was coming. Company officers, all wearing uniform you-ain’t-seen-nuthing’-yet smiles, tried to fire suspense in the knowing assembly. Finally, the PLAY button was pushed on a hidden tape recorder and “Tiger Rag” crescendoed trough the hall, spangled curtains parted, and out rolled a rather garish-looking, orange-and-black-striped Traveler. So went the debut of the Grumman American Tiger, a 180-hp Traveler.

“They’re certainly making a big deal out of an engine change,” commented one aviation writer amid the din.

Well yes, but rightly so. The Grumman Tiger is a big deal, even if it is just a beefed-up Traveler. There’s not another fixed-gear, 180-hp bird made that can catch it. It can outrun one 200-hp retractable and almost match performance with two others. And this hot little number comes respectably equipped for $24,137, making it a very nice buy for the performance you do get and the maintenance problems you don’t. (It has a fixed-pitch prop as well as fixed gear.) Grumman can be pardoned for its trumpeting.

Still, there’s no argument regarding the Tiger’s lineage; it is a Traveler with a 180-hp Lycoming. The Tiger and the 150-hp Traveler even share the same type certificate. The Tiger is an AA-5B, while the Traveler is an AA-5. The two aircraft have identical wings, fuselages and panels.

What differences do exist between the two aircraft, however, are anything but cosmetic. Obviously, installation of the Lycoming O-360 is the most significant alteration. Grumman also upped the Tiger’s wing tanks to 52 gallons from the Traveler’s 38 gallons. This increase in fuel capacity has given the Tiger respectable cross-country legs. Whereas the Traveler’s range at 75% power, with a 45-minute reserve, is quoted as 520 statute miles, the Tiger can cover 650 miles at the same power, with the same reserve. It burns about 10.6 gph.

Like the Trainer, the TR-2 and the Traveler, the Tiger has a sliding canopy that can be left open in flight (up to 130 mph for the latter two).

Rear seats in both the Traveler and the Tiger can be folded down, providing over seven feet of flat space – room enough for samples or sleeping bags or a quick set of Ping Pong, should the flight prove too dull. With all the seats up, the rear cargo area is still 27 Â½ inches deep and rated for 120 pounds of baggage. There’s also a 9 Â½ -inch-deep hat shelf behind this baggage space.
The Tiger’s four bucket seats are plush and comfortable enough, but could hardly be called overstuffed. There’s plenty of leg room both front and rear, plus 40 inches of shoulder room forward and 37 Â½ inches aft.

The panel is clean and easy to read, but a continual surprise in these Grumman birds is discovering the compass secluded in the upper left corner of the board, instead of high on the windscreen where it’s “supposed” to be.

A most laudable feature in this newest Grumman – but again not unique to it, for the Traveler has the same – is the placement of the fuel selector and gauges. These are positioned directly below the power controls. The fuel selector moves right and left and points directly to the gauge of the tank in use. The display is easy to read, simple to use, and prominently placed.

A couple of gripes include location of the trim tab and the flap switch and indicator on the console between the two front seats. Here they are difficult to see, particularly at night. Also, the OAT gauge sticks up from the center of the windshield where the compass might normally be found. So placed, it mars the contours of the trim canopy and might be used – once – as a handhold by an unwitting passenger.

The Tiger’s top cowling is hinged in the middle and secures by a pair of fasteners on both port and starboard sides. Just flip the fasteners and you can raise either, or both, cowl halves, exposing half or the entire engine top. Just like a Model A Ford.

For our Tiger hop we had two adults plus some gear and full tanks. We were about 280 pounds under gross. Our departure airport was Big Bear, which rises 6,750 feet above Southern California. Despite a density altitude of 7,500 feet that day, the Tiger was airborne into a light wind after and estimated takeoff run of 1,625 feet.

There’s enough elevator available on the Tiger to raise the nosewheel as the airspeed is passing through 55 mph and to have the ship fly off in ground effect below 65 mph. The aircraft accelerated rapidly through its best-angle-of-climb speed, 81 mph, to its best–rate–of–climb speed, 104 mph
Airborne, I found the Tiger’s entire spectrum of control pressures to be refreshingly light. If you exert anything more than fingertip pressure, except in a full-stall landing, you’re working to hard. The aircraft trimmed out nicely in a 500-fpm descent, at idle power, with full flaps and trim tab rolled all the way back – a nice configuration to remember if you’re VFR, low on fuel, and caught above a solid sheet of gray.

Clean stalls proved docile and came at 65 mph, but with flaps down the break came at 61 mph and was predictable sharper. With the wheel held all the way back, low-wing recovery can be made without the use of ailerons.

Actually, the Grumman configuration utilizes a minimum of rudder. When attempting slips, you run out of rudder long before you hit the aileron stops. However, that’s what the flaps were installed to handle.

Our cruise-speed calculations came pretty close to matching those of Grumman’s. Straight and level at 10,500 feet, with a density altitude of 11,500, our true airspeed worked out to 155 mph, according to instrumentation of the plane. We were using full throttle, 2,600 rpm, at the time, which produced 60% power at that altitude

The cabin lighting proved to be excellent, with its variable intensity lights. The nose-mounted landing light, an option, was powerful enough so that reference to the VASI or appearance of runway lights wasn’t necessary in the final 200 feet of our 75-mph approach. Touchdown came at just under 60 mph but that big elevator held the nose wheel off long after that.

The Tiger is an impressive performer, especially when you consider it lacks the constant-speed prop so common in its power class. Grumman had hoped to turn out about 200 Tigers during this, its first, year on the market. The company says that target will be met, and easily. Said one Grumman official, “Every last serial number is spoken for.”

Apparently there are a lot of people who agree that Grumman did indeed make a big deal out of an engine change.

The aircraft is a four-place, low-wing, single-engine airplane, equipped with tricycle landing gear.
This airplane is certificated in the normal and utility category. See the airplane’s P.O.H. for approved maneuvers. The airplane is approved for day and night VFR operations when equipped in accordance with F.A.R. 91 or F.A.R 135.

The airplane is powered by a horizontally opposed, four cylinder, direct drive, normally aspirated, air cooled, carburetor equipped engine. The engine is a Lycoming Model O-360-A4K and is rated at 180 horsepower.

The electrical system uses a 24-volt, 70-amp alternator and a battery.