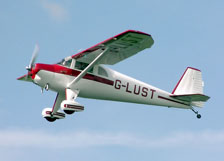 They exist because of the determination of an affable scalawag to create and mass-produce all-metal airplanes. They have been the victims of unfairly critical accusations about their ground handling. They make it clear that they will not tolerate a milquetoast on the stick and rudder but will reward the pilot who truly knows how to operate those devices. They are admired and prized by those who know them well. They are the Luscombe 8 series, sometimes referred to as the Silvaire but generally known to all as simply the Luscombe.

Don Luscombe worked much of his adult life to develop and market an all-metal airplane, fighting almost constant financial crisis in the process. He left Mono Aircraft, maker of the speedy Monocoupes, to set up his own company in Kansas City, Missouri, in 1933.
As in a Greek tragedy, just as Don Luscombe reached his goal of mass-producing all-metal airplanes, the continuing effects of the Depression, constant lack of capital, and his financial shenanigans—including failure to repay loans and creative use of stock—caught up with him. He lost control of the company within sixteen months and resigned in April 1939, never again to be involved with the organization that continued to bear his name.

The basic prewar 8 rapidly evolved into the 65-hp 8A, then the B, which had a 65-hp Lycoming; the C with a very rare, fuel-injected Continental of 75 hp (and the first to be advertised as a Silvaire); and, finally, in 1941, the D. The D had the same engine as the 8A and was targeted at the Civilian Pilot Training Program, which bought Luscombes in quantity until World War II got under way and general aviation manufacturing was stopped. About 1,000 Silvaires were built between the first part of 1938 and the early months of 1942.

As World War II wound down, Luscombe moved its factory to Garland, Texas, and decided to resurrect the basic 8A. It also developed the 8E and 8F with electrical systems and 85- and 90-hp Continentals, respectively. Difficulty in getting production up and running meant that Luscombe was late to the 1946 airplane-selling party and could not cash in as effectively as others, even though it eventually pushed 15 airplanes out the door each day.

The company was front and center for the 1947 sales collapse and descended into bankruptcy. Temco took over Luscombe and produced some 8Fs with wing flaps while also building the Swift before throwing in the towel. In 1955 the type certificate was sold to an organization in Colorado. It managed to sell about 80 8Fs before collapsing in 1960.

The type certificate and tooling were acquired by Moody Larsen of Belleville, Michigan, in 1964. On a small grass strip four miles south of Henry Ford’s behemoth B-24 plant at Willow Run, Larsen lived, worked, and quietly became the Luscombe doctor. He never went into production; rather, he overhauled, rebuilt, repaired, modified, obtained STCs for, and upgraded Luscombes from around the world. He dropped progressively larger engines into the tough, diminutive airframes until, by the late 1960s, 150-hp stud brutes were rocketing off of the grass at Larsen Field.

John Larsen, son of Moody, now runs things at Larsen Field. John grew up in Luscombes, holds an A&P certificate, and has acquired the breadth of knowledge held by his father. When Renaissance Aircraft decided to start up the line with a 150-hp version of the 8F, it came to John Larsen and asked him to build the first one. That airplane was in Oshkosh last year and attracted a lot of attention, so there is hope that the proud heritage is not over.

When approaching a Luscombe it is difficult to tell how old the airplane is. Its clean lines belie its years. Perhaps that is because Luscombe was the first to completely enclose the engine within a cowl, a feat of development at a time when Aeronca and Piper were still cooling flat engines by leaving the cylinders out in the breeze and hoping for the best.

Most Luscombes now have 12.5-gallon fuel tanks in each wing, converting to the style of the later marques and away from the original 14-gallon tank behind the seat. Fairly large quantities of fuel in the fuselage tend to give most pilots the heebie-jeebies, so the wing tanks are an improvement, despite the substantial concern Luscombe showed in 1937 for crashworthiness in designing and protecting the original fuselage tank. After all, the factory employees had received a practical education in crashworthiness be-cause for several years a major portion of the company’s income came from re-building wrecked Phantoms.

For those pilots taller than about five feet, 10 inches, boarding the Silvaire is challenging. Bluntly speaking, the cabin is just plain small by today’s standards. With a full fuel load, the maximum allowable weight in the cabin is only about 400 pounds—a motivator, combined with the space available, to keep pilots from becoming too portly. Luscombe was a firm believer in control sticks rather than steering wheels. For the sake of cost, there are two sticks but only one throttle, located in the center of the panel, so the command stick is held in one’s left hand. Most pilots adjust fairly quickly to this slightly unusual state of affairs.

Experienced Luscombe pilots recommend taxiing no faster than a brisk walk so as to keep things well under control. The gear is stiff and narrow, yet the rudder is effective, as is the tailwheel. Visibility over the nose is outstanding. The rudder has a relatively short throw, so a pilot used to more travel or less responsive rudders may overcontrol a bit at first. The brakes are actuated by independent floor pedals that were a marvel of innovation in their time. Now, because they are pushed by one’s heels rather than toes, there are those who insist they are a nefarious plot on the part of those who make airframe replacement parts to ensure a steady flow of business. On a gusty day in a Luscombe with questionable brakes, the sweating occupant of the left seat may be in full agreement. Taxiing one in a stiff crosswind is work. If the pilot is using one of the brakes a great deal, the length of time for a successful crosswind taxi may be limited, as the brake may heat up and fade.

Depending on the model, loading (the maximum gross weight of all but the lowest-powered versions is 1,400 pounds), and temperature, acceleration ranges from sedate to brisk. The tail comes up of its own volition, or earlier if motivated by the pilot. Rotation speed is about 55 mph. Once in the air the pilot discovers that the Silvaire has crisper handling than its tube-and-fabric brethren. Even at the climb speed of 72 mph, the airplane answers control inputs nicely.

Climb rate for the 8E and 8F was claimed to be 800 feet per minute. That is somewhat optimistic. If Moody Larsen did his magic and caused a 115- or 150-hp engine to be up front, climb rate can easily exceed 1,000 fpm. Yes, a turbine has been hung on a Luscombe. Yes, sadly, it has already crashed. In cruise the 8E or F will scoot along at a little better than 100 mph on about 5.5 gph. A properly leaned Silvaire generally has greater endurance than its pilot, simply because of the small cabin. Those who have sat in the new Renaissance Luscombe and experienced the magic that John Larsen did to the interior are astonished that what had been cramped confinement is now far more comfortable.

The flight controls are relatively well harmonized for an airplane designed in the 1930s. Maneuvering is precise. Steep turns are such pleasure that it is difficult to stop. Slowing to speeds just above the stall demonstrates that the controls, particularly the rudder, remain effective. The stall breaks cleanly. If the airplane is rigged correctly, it does not want to drop a wing; it just pitches down, straight ahead. Recovery is conventional and only requires the pilot to reduce back pressure on the stick rather than shove the nose down. The power-on or departure stall demands that the ball be kept in the center, or the airplane will roll briskly and drop the nose sharply at the break. Overall, the airplane is most pleasant to fly and travels cross-country efficiently. With appropriate equipment it is a passable IFR airplane, although range and en-durance can be a little short when trying to reach an alternate. For something between $15,000 and $21,000 and the willingness to learn to fly the airplane, the Luscombe can be a most enjoyable personal magic carpet.

Returning to the field for landing, plan on using carburetor heat when the power is reduced, then slow the airplane to about 65 to 70 mph on final—or slower if flying one with flaps. Full stall and wheel landings are a little deceptive in a Silvaire. Because the flare and touchdown are so easy to do well, new Luscombe pilots occasionally experience a false sense of security. After greasing the airplane onto the runway, they sometimes make the mistake of thinking that they can relax once they are on the ground. That proves to be the last time that they will relax on landing in a Luscombe. Ever.

The handling of a Luscombe on landing has to be put in perspective. A Bellanca Citabria is considered an easy tailwheel airplane to handle on landing. A Luscombe is a few steps more difficult to keep straight on landing than a Citabria and a few steps easier than a Stearman. The combination of relatively stiff landing gear, fairly narrow gear tread, and effective flight controls means that a pilot who does not position the controls correctly is going to have trouble during landing rollout. Those who have flown Luscombes for a time have learned that because the controls are very responsive, even at fairly low speeds, the aircraft can handle very stiff crosswinds. Luscombe pilots have broken off tailwheels on bumpy fields and discovered that they could fly home, make a wheel landing, apply a little brake and power, then taxi to the ramp while holding the tail in the air. While it may be nothing but showmanship, the Silvaire can make a good pilot look very good and let the pilot flying it have a ball.

See the original article: Lust for a Luscombe
Rick Durden, AOPA PILOT, May 2000

The aircraft is a two-place, high-wing, single-engine airplane, equipped with conventional landing gear.
This airplane is certificated in the normal category. See the airplane’s P.O.H. for approved maneuvers. The airplane is approved for day and night VFR/IFR operations when properly equipped and certified.

The airplane is powered by a horizontally opposed, four cylinder, direct drive, normally aspirated, air cooled, carburetor equipped engine. The engine is a Continental Model C85-12 and is rated at 85 horsepower.

The electrical system, with a 12 volt storage battery, is fully protected by thermal-type circuit-breakers and switches.