Get the app Get the app
Already a member? Please login below for an enhanced experience. Not a member? Join today
Pilot Resources Aircraft & Ownership Aircraft Fact Sheets Mooney M20 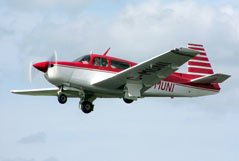 Most pilots would say they like and enjoy their airplanes, while still others would profess to nothing less than a passionate love affair. Forget the cost of flying, the commitment to maintenance and pilot proficiency, or any individual shortcomings of the make and model. For these owners, the airplane experience is the ideal combination of a lust for flying and the stewardship of a finely honed machine, a relationship guaranteed to swell the heart at its mere mention.

And then there are the Mooney owners.

Few marques seem to call together such a diverse group of fanatics as Mooney. Arguments often fly between Mooney types and, well, everyone else: They are almost always spirited, occasionally caustic, and offer some interesting insight into the psyche of the Type-M personality. This psychological profile might read as follows: Wants to travel quickly, efficiently, no need to carry anvils. And while it's a bit far-fetched to say all Mooneys are fast and fuel-thrifty — and to say that none is a full-seats, full-fuel affair — the M20 line has distinguished itself as one that gets the most speed out of the least horsepower.

Philosophies aside, Mooney history is at once intriguing and frustrating. The company has been owned by several entities over the years, each one changing the model names and making changes both minor and major. A somewhat less tortured way to differentiate among the many models is to follow the numeric designations, like M20, M20A, and so on.

An outgrowth of the single-seat M18 Mite, the M20 series emerged in 1955 with a 150-horsepower Lycoming, constant-speed propeller, and an unusual combination of airframe materials. That first M20 model, like all those after, employs a steel-tube frame surrounding the cockpit, which is in turn sheathed by thin aluminum skins. In the early, straight-M20 model, the wing and tail both were wooden. These versions are becoming more and more rare because the wooden components require extensive inspections and often expensive maintenance. As such, keeping a wood Mooney alive could be cost-prohibitive, especially in light of the few mechanics who know how to or are willing to work on a "composite" Mooney; in fact, several prominent shops said they would not even touch a wood-wing, wood-tail model.

A metal tail came with the 1958 model, as did a 180-hp Lycoming, but the big change to the M20 came in 1961 with the B model, which sported a metal wing. It lasted one year and was followed in 1962 with the M20C, essentially the same airframe with a slightly different 180-hp Lycoming and its maximum gross weight boosted to 2,575 pounds from the B's 2,400-pound limit. This is the most common of the early Mooney models, largely because it remained in production through 1978, briefly sharing the showroom with a then-new and significantly improved M20J, the 201.

Looking for still more speed, Mooney bolted a fuel-injected 200-hp Lycoming onto the C model, and the M20E was born. Both the C- and E-model Mooneys are called the short bodies, to differentiate them from the M20F, brought out in 1967, which received a 10-inch cabin stretch.

It's usually speed, not systems, Mooney lovers dwell upon. Owners of 180-hp, short-body airplanes say to count on a maximum cruise speed of 140 to 147 knots, with the company claiming 150 as the 75-percent-power cruise. With the smaller fuselage and the larger engine, the M20E is supposed to turn in nearly 160 knots at optimum altitude, although owners admit that 155 knots is about right for an unmodified airplane. The long-fuselage airplanes, by the way, are 4 to 6 knots slower.

Those Mooney owners also like to boast of range and endurance. In the early airplanes, fuel capacity is 48 gallons usable, which, at a typical fuel burn of 8.5 gallons per hour, provides 5.6 hours' endurance with no reserves. The last of the 200-hp airplanes had the larger 64-gallon tanks. Larger tanks can be fitted to either series.

Among the high points of the Mooney's handling qualities is excellent longitudinal stability. Trim it for an airspeed, and it tends to hold it without much work on the pilot's part. Most models made in the 1960s used what Mooney called "PC," or positive control. It was a simple vacuum-based wing leveler that was always on; you had to press a button on the control wheel to interrupt it for maneuvering.

Pitch trim is accomplished by moving the entire empennage just aft of the horizontal stabilizer's leading edge, which is why the trim is often a bit stiff — you're moving more than just a little tab back there, after all — and the electric trim in later models can be painfully slow. You'll notice this especially during deployment of the last third of the flaps; there's a strong nose-down pitching moment that should be countered with trim. Watch the go- around, too because you'll need a hefty push on the yoke to counteract the trim change with flap retraction.

If you decide to join the Mooney fraternity, two peripheral items should be considered. First, find a reputable Mooney shop; the airplanes are different in construction and maintenance than most makes, and you'll be financing some A&P's education if yours is the first Mooney he's seen in awhile. Second, get in touch with the Mooney Aircraft Pilots Association http://www.mooneypilots.com/ (210/525-8008). This is a group that can provide tremendous advice to the Mooney owner, hosts pilot proficiency programs, and can help with difficult-to-find parts.

This airplane must be operated as a Normal Category Airplane, aerobatic maneuvers, including spins, are prohibited. The airplane is approved for day and night VFR/IFR when in accordance with F.A.R. 91 or F.A.R. 135.

The engine is a Lycoming Model IO-360-A3B6 and is rated at 200 hp at 2700 RPM. It is a four cylinder, direct drive, normally aspirated, air-cooled, horizontally opposed, fuel injected engine.

Fuel is carried in an integrally sealed section of the forward, inboard area of each wing. Total useable fuel capacity is 64 gallons. Both tanks have fuel level indicators (tabs) visible through the filler ports. These indicators show the 25-gallon level in each tank. Fuel feeds from one tank at a time to the selector valve and through the electric fuel pump enroute to the engine-driven pump and the fuel injector unit. The electric fuel pump is capable of supplying sufficient pressure and fuel flow for rated engine performance should the engine driven pump fail. Electro/mechanical fuel-level transmitters in the tanks operate the fuel gauges. Vents in each fuel tank allow for overflow and ventilation.