Get the app Get the app
Already a member? Please login below for an enhanced experience. Not a member? Join today
Pilot Resources Aircraft & Ownership Aircraft Fact Sheets Piper Apache 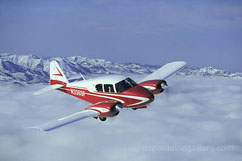 Some 2,047 Apaches were built over the years. At first, well-heeled individuals and corporations used them as comfortable business transportation. They later trickled down into every aspect of general aviation, finding an enduring niche a multiengine trainer.

So, what does the prospective multiengine pilot face in the Apache? Preflight means some homework to learn the systems. Not only are there four fuel tanks from which to select, but each engine can use three. It is wise to know which three. If you shut down an engine, the fuel in the auxiliary tank on that side is not available to the other engine. The hydraulically actuated landing gear has only one engine-driven pump, on the left engine. Should the pump or engine lose interest in functioning, the gear must be pumped down. If pumping doesn't work, there is a final alternative: a carbon dioxide blow-down system. Once blown down, the hydraulic system has to be purged before further use. The heater is gasoline-fired and lives in the nose. Its fuel consumption must be considered in flight planning. Despite its being a twin, the Apache is not truly redundant. There is but one generator (on the right engine). It does, however, have two vacuum pumps. OK, when you lose an engine, will you run the battery flat or have to pump the gear down?

Walking around the airplane means checking oil in two engines and draining fuel from four tanks, but is otherwise pretty conventional.

A pilot newly introduced to the cabin of the Apache invariably takes some time to survey the domain. There is a certain majesty to the left seat. One sits regally, on high, and somewhat removed from the mere mortals in the passenger seats.

Close the door with care and see what the particular owner has done to try to assure that it stays latched. Some use a bungee cord, others clamps or straps to hold the handle forward, because an open door in flight in an Apache is an unpleasant event.

Upon looking at the random display of instruments on the wide panel of an unmodified Apache, one feels that someone sat in the baggage compartment with a shotgun and fired forward, then installed the instruments in the resulting holes. The gear and flap handles are reversed, being in the position used on airliners, not more modern general aviation aircraft. Depending on the model year, the throttle, propeller, and mixture levers are all the same size and shape, and all may have black knobs. Only in the later versions are the knobs color-coded.

Between the front seats are small levers that select the desired fuel tanks. They operate cables that move the fuel valves in the wings. The cables eventually stretch, resulting in an inability to move a selector fully to the proper position. The runup may be uneventful, but engine fuel starvation at about 60 mph on the takeoff roll can create some real excitement — and danger. The Apache is no milquetoast when an engine quits, so the resulting swerve prepares the aspiring multiengine pilot for a real world where most twins demand appropriate handling reasonably quickly.

Startup is easy, although it can take a bit of time getting used to doing everything twice. The starter buttons on the early Apaches are hidden under the left side of the instrument panel — an antitheft device that can drive the uninitiated to distraction. Newer models sport a toggle switch to select starters. The right engine is usually started first because the battery cable is shorter, the generator is located on that side, and there is less electrical resistance to the starter. Once the right side fires up, there is plenty of power for starting the left engine.

Once running, the bark of a mere 150-hp engine's exhaust running through augmenter tubes sounds as if there is far more power out there than there really is.

Runup is only slightly more complex for the transitioning pilot. A rotating switch allows quizzing both vacuum pumps as to their health as there is but one gauge. (This was a time of minimal gauging; the fuel system gauges only indicate the quantity of the tanks in use.) There is repetition of the mag, carb heat, and prop checks. The propellers are cycled to ensure that they will actually feather; the inability to do so is a no-go item.

The single-engine pilot's first takeoff in an Apache is memorable. Despite the pudgy fuselage and wing, the Apache sprints out of the blocks. It is a rush. Pushing two throttles to the stop for the first time generates a feeling that is very effective in continuing to separate pilots from their money. They want to do it again and again. Minimum control speed (VMC) of 85 mph is reached rapidly. Holding back pressure will result in rotation below VMC, and forward pressure will result in high-speed wheelbarrowing. The magic speed is 90 mph, or VMC plus five mph, where merely thinking about raising the nose is enough — the rotund bird bounds into the air. Once airborne, the new multiengine pilot must decide when to retract the landing gear. The rule of thumb is to wait until one cannot land on the remaining runway. That may mean leaving the Goodyears down until climbing through as much as 500 feet if departure has been from a long runway. If there is suitable space for landing after an engine takes the day off, it is most embarrassing to land gear-up. Once selected, the gear retracts one wheel at a time, much like the Curtiss P-40 of World War II.

Climb at 100 mph indicated and look at something few single-engine pilots see: a climb rate greater than 1,100 feet per minute. That kind of climb for a 3,500-lb-gross-weight aircraft on merely 300 hp is not bad. As one friend said, "It ought to climb; it sure takes its time in cruise."

Yes, cruise is leisurely — 130 to 135 kt is about it. A sweet potato will not hurry. Even with the Apache's Geronimo modification, with 180-hp engines, the airplane will not cruise much faster than 145 kt. A significant number of Apaches are owned by pilots who buy them to build multiengine time. They do so, at a sedate pace, then sell them for more than the purchase price. Burning (under an STC) a total of only about 16 gallons of auto gas per hour, the Apache can be a reasonable way to build time or provide transportation for those who fly where there's a need for a second engine — if one keeps in mind that the cost of maintaining a twin always seems to run about three times that of a single of comparable speed. Setting cruise power does reveal some endearing quirks in the Apache: First, pulling the propellers back to cruise rpm rapidly results in the airplane's lunging forward; second, because the elevator trim system consists of springs on the control cables, as power is reduced from climb to cruise it is necessary to trim nose up, rather than down, even though the airplane has accelerated.

Airwork such as steep turns and stalls is moderately demanding. The airplane has the ponderous feel of heavier airplanes. The stall breaks noticeably but with no attempt to drop a wing. Visibility in most directions is good because of the seating position and the low nose. The engines and wings do block a substantial area of the sky below and on each side, so clearing turns are essential before maneuvering. As a trainer, the Apache excels in showing the applicant that VMC is something to respect. VMC is the speed at which the rudder becomes ineffective at preventing a yaw-induced roll. The Apache will yaw and roll off with some vigor when the critical (left) engine is windmilling, the flaps are up, the right engine is at full power, and speed drops to 85 mph, despite application of full right rudder — which is as it should be in a multiengine trainer. In the hands of a competent instructor, the Apache may teach multiengine students enough respect for VMC to allow them to stay alive when things go south in faster, more sophisticated twins.

The Apache shines as proof that the loss of one engine results in loss of not half the climb rate but closer to 90 percent. The exhilarating rocket ship on two engines becomes a dog on one. On a hot day, selection of best single-engine rate-of-climb speed (95 mph) in a loaded Apache may result in what is described as "best rate of least going down." This airplane teaches a student that a twin has its horsepower split into two packages. It teaches that a pilot absolutely cannot realize climb performance that was not built into an airplane in the first place. It teaches that raising the nose doesn't help. It teaches that a multiengine pilot flying with one dead engine may simply have to point the airplane at something soft and cheap, and land, using the good engine to regulate the glide. These are good lessons. The Apache teaches them well. The instructor can then point out that a forced landing, right side up in that rugged structure, may mean walking away, while getting below VMC and rolling upside down will be fatal.

After motoring slowly around the sky, the new Apache pilot discovers the paradox of struggling to slow the airplane to the maximum gear-operating speed of 125 mph and flap-operating speed of 100 mph without chopping the throttles. Once the flaps are selected, the speed must drop below best single-engine rate of climb and down near the minimum safe-single-engine speed of 90 mph, thus challenging the pilot to fly precisely. If an engine is lost in the pattern with gear and flaps down, landing is mandatory. Getting the gear and flaps up (pumped up if necessary) and the dead engine secured and feathered, while accelerating to best single-engine rate-of-climb speed of 95 mph, takes at least 800 feet of altitude. New pilots in the Apache tend to get fooled by the wide panel and shape of the nose and often come down final with the nose pointed to the left. Despite those considerations, closing the throttles on short final and flaring toward a full-stall landing can result in a most pleasing touchdown and short rollout, for the Apache can be operated from fields to which few other twins dare venture.

Thousands of multiengine pilots have acquired their skills in Apaches. More than a few have survived engine failures in high-performance twins at low altitude on takeoff because the Apache taught them the skill to handle that situation. Those pilots tend to say very good things about it.

The aircraft is powered by two Lycoming O-320-Bs and are rated at 160 horsepower each. Both are four cylinder, normally aspirated, direct drive, air cooled, horizontally opposed, carburetor equipped engines.

Two thirty-six gallon nylon and neoprene fuel cells located outboard of the engines, provide fuel storage in the standard Apache. Auxiliary tanks holding eighteen gallons each are installed optionally in the outboard section of the wing. Fuel can be pumped from any tank to both engines, through use of the four fuel pumps provided for this purpose. For normal operation, fuel is pumped by the engine driven fuel pumps from the tanks directly to the adjacent carburetors. The fuel valves can be left on at all times and the crossfeed left in the off position. Electric auxiliary fuel pumps are installed in by-pass fuel lines between the tanks and the engine driven pumps.

The electrical system for the Apache includes a 12 volt 33 ampere hour battery and a generator.