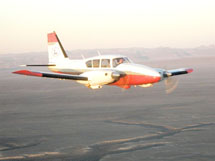 By the end of the 1950’s it was clear that the market wanted something bigger and faster out of Piper, and Piper wanted something that could compete in passenger and baggage space as well as performance, even though the Apache had gained a fifth seat in 1955. Thus was born the Aztec, with six-cylinder, 250-horsepower Lycoming O-540 engines replacing the Apache's four-jug, 160-hp O-320 mills (early models had 150-hp engines), and a stabilator, borrowed from the Comanche, in place of the Apache's horizontal stabilizer and elevator. Otherwise, the airframe changed little and therefore shared the same model designation — PA-23 — but now with a -250 extension.

In fact, the original five-seat Aztec, introduced in 1960, looked much like the Apache except for a larger, swept vertical fin. The last Apache model, produced with 235-hp O-540 engines from 1962 to 1965, shared the same tail, so a close look is necessary to differentiate the two models. (The Aztec also cost considerably more than the Apache, so the Twin Comanche was introduced in 1963 to fill the low-cost twin niche.)

The Aztec B, introduced in 1962, established the Aztec profile most pilots are familiar with, adding a sixth seat and a long, blunt nose housing a second baggage compartment. (Piper was to make much of the volume of the two compartments — over 40 cubic feet — but each was forever limited to 150 pounds.) The B was one of the first GA airplanes to feature a modular instrument panel, allowing instruments and avionics to be removed and replaced much more easily than before. The B also had removable skin panels in the nose to ease access to the area behind the panel, the battery, "brake valves," and hydraulic fluid supply. The window on the left side of the second seat row was modified to serve as an emergency exit. The B was the first Aztec to be available with turbocharged engines, allowing a 75-percent-power cruise speed at 25,000 feet of 235 mph true (204 KTAS).

The C model, which came along in 1964 and would be produced in the greatest numbers, added fiberglass landing gear doors and borrowed the Twin Comanche's streamlined "Tiger Shark" engine nacelles. Fuel injection and dual alternators came standard on the C (they had been optional on the B). The suggested retail price of the airplane that year was $54,990, but avionics and operational packages (including propeller and wing deice and oxygen) added from $5,565 to $28,405, depending on the equipment selected. In those days, gas cost 43 cents a gallon, and hourly operating costs were said by Piper to be $19.34. A normally aspirated C had a top speed of 218 mph (189 knots) and cruised at 208 mph (181 kt). At the long-range power setting, endurance was nearly 8 hours and range was 1,300 statute miles (1,130 nm) with no reserves. In reality, at a "normal" cruise power setting (about 80-percent power), fuel would last about 4 hours and 830 miles with no reserves.

In the D, which entered production in 1969, Piper finally standardized (in a conventional T configuration) what had been a scatter-shot instrument panel. Power controls received differently shaped knobs for mixture, props, and throttles. Ram's horn control wheels improved the view of the panel. Ignition and starter switches migrated to the left side wall. The normally aspirated model gained a couple of knots of airspeed, and the turbo version sped up to 250 mph (217 KIAS) at 24,000 feet. The cabin was refined to add to the already luxurious accommodations, including removable armrests for the middle and front seat rows.

The load-carrying ability of the Aztec had always been one of its selling points, and it truly was prodigious: You could fill the tanks, seats (with 170-pound FAA-standard people), and baggage compartments and still not reach the maximum certificated takeoff weight of 5,200 pounds in the normally aspirated (and minimally equipped) D (the earliest models had a 4,800-pound MTOW. The straight D had a useful load of 2,267 pounds; the turbo, 2,077 pounds.

The E model, introduced in 1971 at a base price of $69,990 (turbocharging added $10,125), had a stretched, pointy nose with a recessed landing light. The stretch cut useful load by a little over 100 pounds. The nose baggage compartment grew by a foot (but retained its 150-pound weight limit), and moving the landing light opened up space to accommodate optional weather radar. Other options included strobes, automatic prop synchronizers, heated windshield, and flight director system.

By this time, the Aztec's low VMC of 80 mph (70 KIAS), superior short- field performance (820-foot takeoff roll, 1,250 feet to clear a 50-foot obstacle, 1,250 feet to clear the same obstacle coming back, and 850-foot landing roll), rate of climb (1,490 fpm fully loaded for the normally aspirated E; 1,530 fpm for the turbo), and 1,600-pound cargo payload had made it a favorite both at home and abroad in mail, cargo, and air ambulance applications, as well as air taxi and charter work, and Piper pursued these markets with vigor. By 1974, gas was still only 52 cents a gallon and operating costs ran about $25 an hour, according to Piper.

The last Aztec, the F, was built from 1976 through 1981 and sported squared-off wing tips and a rectangular stabilator. An automatic flaps-to- stabilator-trim interconnect was added to counteract the airplane's only bad habit — its characteristic pitch-up as flaps are deployed. Pilots didn't like the new stabilator, though, and Piper returned to the traditional one in 1980. If you found the four 36 gallon wing fuel tanks the Aztec had used to this point to be insufficient, the F could be had with 20-gallon tip tanks, which allowed a 1,300-nm range with 45-minute reserves (1, 145 nm for the turbo). The F lost a little takeoff performance but offered a shorter accelerate/stop distance than its predecessors (1,985 feet). A full set of copilot instruments was an option. The four front seats got new backs like the ones on the Navajo; the fuel filler ports and caps likewise came from the Navajo. (With the F, too, Piper finally began marking the airspeed indicator in knots and documenting performance accordingly.)

Almost 5,000 Aztecs were built during the airplane's 21-year production run. Many have headed overseas to satisfy foreigners' insatiable hunger for American airplanes.

The Aztec was incrementally refined over the years, but it never really changed much in any big way. Aside from the wildly disorganized instrument panels found on pre-D models, the systems in one are pretty much like the systems in another.

The Aztec's docile handling characteristics make it an ideal multiengine trainer. If it seems to handle like a giant Cub, that's because it shares the earlier airplane's wing cross-section. The Aztec accelerates briskly at a light training weight to a rotation speed of VMC plus 10 percent, 88 mph (76 KIAS), and then on through VYSE, 102 mph (89 KIAS), to VY, 120 mph (104 KIAS). (These speeds are for a C model but are typical.) In high density altitude conditions, the recommended cruise climb speed of 135 mph (117 KIAS) results in a very leisurely climb rate. Visibility over the nose is not bad at 120, and the cowl flaps do a good job of keeping cylinder head temperatures in the green.

In cruise, the flight controls are typically heavy of a high-speed airplane in roll and yaw, a bit lighter in pitch. Steep turns can be accomplished without any straining or sweating — indeed, without retrimming. Power-off stalls are unremarkable; you'll feel the buffet through the control wheel well before reaching the 68 mph (59 KIAS) stall speed. Nose it over to accelerate through VMC before adding power; this takes a moment in the draggy landing configuration. Departure stalls are similarly bland; lower the nose and let the airplane accelerate.

Under the hood, you will find the airplane stable and predictable, even with the critical engine feathered. One note here is that Aztecs with 120 pounds of fuel in each aux tip tank tend to Dutch-roll a bit in turbulence, so standard practice is to burn off the outboards first.

A smooth power reduction over the numbers, accompanied by a slight nose-up attitude, and the airplane touches down gently just as the throttles hit the stops, the arrival cushioned by big oleo struts. The gear is beefy enough to absorb clumsy landings or unimproved landing sites, and, if proper speed control is exercised, the airplane stays planted; when that wing stops flying, it stops flying. Nosewheel steering is heavy, as might be expected. Even at idle power settings, the airplane will build up speed in the taxi. Avoid riding the brakes. Instead, take a tip from the airliner cockpit: Let the airplane speed up on its own, then apply the brakes to slow to walking speed. Cycling the brakes in this way helps keep them cool.

The Aztec was never the fastest light twin, nor the one with the greatest payload, nor the most powerful. But in terms of cabin space, load- hauling ability, fuel economy, range, VMC, short-field performance, durability, and accelerate/stop distance, it matched or beat its rivals handily. What it lacked in panache, it made up in good manners. Today, more than 30 years on, it continues to provide comfortable personal transportation and to labor honestly in the vineyards of commercial aviation. Perhaps more important, it offers many students their introduction to the challenges of multiengine flight, where, like any good instructor, the Aztec is a gentle and reliable friend.

The aircraft is powered by two Lycoming IO-540-C4B5s and are rated at 250 horsepower each. Both are six cylinder, normally aspirated, direct drive, air cooled, horizontally opposed, fuel injected engines.

Four thirty-six gallon flexible fuel cells located outboard of the engines, provide fuel storage in the Aztec. Fuel can be pumped from any tank to both engines, through use of the engine driven and/or electric fuel pumps. For normal operation, fuel is pumped by the engine driven fuel pumps from the tanks directly to the adjacent fuel injector. The fuel valves can be left on at all times and the crossfeed left in the off position. Electric auxiliary fuel pumps, located in the engine nacelles, are installed in by-pass fuel lines between the tanks and the engine driven pumps.