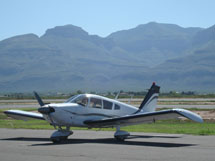 For those who grew up in the era of all-metal airplanes, the Cherokee is as synonymous with Piper Aircraft Corporation as the Cub. But when the first PA- 28 rolled off the brand-new assembly line at Vero Beach, Florida, 30 years ago, it was a significant departure from the tried-and-true tube-and-fabric designs made famous by Piper in Lock Haven, Pennsylvania. The Piper design team headed by Fred Weick never set out to earn a place in aviation chronicles. Their goal was straightforward: Build a good, simple, four-seat airplane at low cost.

"The airplane started out to be a simple little replacement for the Tri-Pacer, and the eye was on low cost. I thought you could make an all-metal airplane for as low a cost as a fabric one," Weick recalls. "Pug [Howard] Piper and I sat down and worked out what we wanted. We had specifications on the shape and the size and the power and the performance."

The new airplane, designated the PA-28 or the twenty-eighth Piper model, would be all metal, with a low wing to enhance ground handling characteristics. The gear on a low wing airplane can be placed farther apart than on a high-wing design, and handling in a crosswind was deemed better in low-wing airplanes, thanks to the wide-spread gear and low center of gravity, Weick said. It would seat four, be powered by a four-cylinder, 150-horsepower Lycoming (150 or 160 hp would be available in early production models), and would have tricycle gear with a 10-foot tread. It would be fairly small, with a wingspan of about 30 feet. Not wanting the PA-28 to compete with the higher priced, retractable Comanche (introduced in 1958), Piper limited the Cherokee's cabin width to 42 inches, 2 inches narrower than the Comanche's.

Cherokee production began slowly but, by late summer, was up to about five airplanes a day. Cost for the standard model was $9,995, although many optional accessories were available at added cost. Soon, higher powered models were available, as were ski- and float-equipped versions. In early 1962, Piper delivered its 500th Cherokee only three months after delivering the 250th. The 1,000th was delivered in the spring of 1963.

The rest, as they say, is history. Cherokee's direct offspring included various models of the Warrior, Archer, Arrow, Dakota, Pathfinder, and Cadet. Among later refinements to the basic Cherokee design were tapered wings, bigger powerplants, larger fuselages, retractable landing gear, and turbocharging. The lessons learned and theories proved in the Cherokee's development, production, and success were reflected in the entire line of Piper models to follow.

All structures are of aluminum alloy. The airplane is a two-place (optional four-place), low wing, single engine airplane equipped with fixed tricycle landing gear, having a steerable nose wheel and two main wheels.

The engine is a Lycoming Model IO-320-E2A and is rated at 140 horsepower at 2450 RPM. Major accessories include a geared starter, a 35-amp alternator, dual magnetos, vacuum pump drive, fuel pump, full flow oil filter, and a float carburetor.

The Cherokee is equipped with the Piper F.T.P. (Full Time Power) Electrical System. Its 12-volt alternator provides electrical power at all engine speeds and results in improved performance for radio and electrical equipment and longer battery life. In addition to the alternator, the electrical system includes a 25 ampere-hour battery, a voltage regulator and a master switch relay.