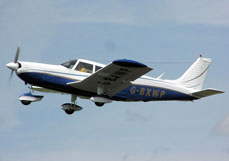 If you watch automotive sales trends, you've surely noticed that minivans are hot properties these days. In the early 1980s, Chrysler’s minivan twins, the Caravan and Voyager, cleaved open this market niche like a spoon through frozen yogurt. Since then, nearly every domestic and foreign manufacturer has joined the fray. These vehicles can be found hauling grinning cub scouts, delivering sushi, or carting bags of sod for Chip and Muffy's petunia bed. For burgeoning families, the minivan is the perfect upsized alternative to a sedan. Besides, Chip would never allow Muffy to carry peat moss in the trunk of his Mercedes.

For a change, someone beat Detroit and Tokyo to the punch. You see, we've had aerial versions of the minivan at our fingertips since the mid-1960s. They are the six to eight-place singles, far roomier than the four-seaters from which they evolved. Cessna’s Skywagon 207 and Stationair 207 have performed many of the same tasks that make minivans indispensable today.

What makes the Six essential is its ability to be packed as tight as a subway car with people and possessions and whisk them off in reasonable comfort at modest expense. The Six is basically a simple aircraft, with rugged, proven systems. That it has survived decades of utility work-check hauling, charter flights-speaks well for the durability of the basic design. Today, a used example would fit the bill for an expanding family-or a family with expanding possessions.

The Cherokee Six's lineage is convoluted. Introduced in 1965 as a longer and wider variation on the PA-28 airframe, the Six was more than four feet longer and seven inches wider than its Cherokee cousins. In the nose that year was a 260-hp Lycoming 0-540. The next model year, a fuel-injected 300-hp engine was an option and soon became the preferred powerplant. The 260-hp model continued in production through 1978; that year, Piper built just eight, against more than 200 of the 300-hp Six.

Piper also made the Six a retractable in 1976, calling it the Lance. Two years later, the Lance would sport a T-tail — which contributed to comparatively lackluster runway performance — and plummeting sales numbers.

By 1980, the whole widebody Cherokee line became Saratogas, a change accompanied by a new, tapered wing similar to the one introduced on the Warrior in 1974 and spread through the PA-28 line in the ensuing years. With the Saratoga-in all permutations of fixed-gear, retractable, turbo, and normally aspirated versions-Piper brought the stabilator back down to fuselage level and fitted the new wing. The Saratogas continue in production today.

Pilots transitioning from the PA-28 models will find the Six a large but manageable step up. At first, the cabin appears huge, the rearmost seats far enough back to be out of field-goal range. The panel is wide enough to house a full complement of avionics and still look half empty. But most Cherokee traits remain, including the multiengine style throttle quadrant and the gauges for propeller rpm and manifold pressure/fuel flow directly over the pilot's right knee. Some pilots dislike this arrangement, but those with some Cherokee time will feel right at home.

Two of the Six's traits require acclimatization for PA-28-bred pilots. One is heft. The airframe alone is substantially larger and heavier than the other Cherokees', and it can be loaded to a point that would make an Archer’s bones creak. The other consideration for transitioning pilots: Especially in the older, Hershey-bar-wing airplanes, maintaining approach speed is essential. The airplane will sink rapidly with the power pulled back and will slam through ground effect if the speed is allowed to decay. This, and the fact that the long snout obscures much of the forward view in the landing flare, makes the first few arrivals challenging. But as the saying goes, time (as in type) heals all wounds.

Pitch effort is greater in the Six than in the lighter PA-28s, and the leg-strengthening nosewheel steering reminds you that there is a generous portion of engine hung out there. The Six's heft and stability make it an excellent instrument platform, though. Its long fuselage also improves its yaw stability compared to the short-body Cherokees.

The Cherokee Six and the Saratoga turn in similar performance numbers. The 260-hp versions top out at 135 to 140 knots on 14 gph, while the slicker Saratoga (with 300 hp) is capable of 148 knots at 75-percent power on 16 gph. Throttling back to 65 percent, the Saratoga is good for 144 knots at 13.8 gph. Early Cherokee Sixes had 84-gallon tanks-although the specification sheet says 50-gallon tanks were standard, none were built. The later Saratogas came with a 107-gallon supply.

The trick in buying a good used PA-32 is finding one that hasn't been through the check-hauling/cargo-toting ringer. The airplane has been immensely popular in those roles, and finding a relatively low-time example might entail some footwork. But if you absolutely, positively have a load to haul, that effort will be rewarded. Few models combine the simplicity and utility found in these airplanes.

The aircraft is powered by a Lycoming IO-540-K1A5 and is rated at 300 horsepower. It is a six cylinder, normally aspirated, direct drive, air cooled, horizontally opposed, fuel injected engine.

Standard fuel capacity of the Cherokee Six is 84 gallons, all of which is usable except for approximately one pint in each of the four tanks. The two main inboard tanks, which hold 25 gallons each, are attached to the wing structure with screws and nut plates. The tip tanks are constructed of resin-impregnated fiberglass and hold 17 gallons each. An electric fuel pump is provided for use in case of failure of the engine-driven pump and operates from a single switch and independent circuit protector. Fuel quantity gauges for each of the four tanks are located on the instrument panel.