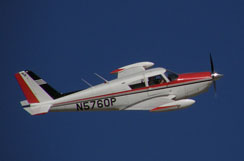 The Comanche line debuted in 1958, with the Comanche 180 and 250 models. These two models remained in production until 1964. Subsequent Comanche models — both single- and twin-engine — were built until 1972.

The result? Comanche 250s sold like hot cakes. By the time its production run ended, some 2,500 Comanche 250s had been sold. This made it the biggest seller of all the Comanches, Twin Comanches included.

The Comanche singles brought Piper into the modern era. Before 1958, Piper built its reputation on slow tube-and-fabric airplanes with cutesy names and pre-World War II design philosophies. The all-metal Comanches, with their laminar-flow wings, retractable landing gear, stabilators, and greater interior comfort than any previous Piper, made the aircraft a serious competitor.

The Comanche 250 has nice handling characteristics and is very easy to fly. Roll response is sprightly, and the airplane's all-flying stabilator keeps trim forces easy to manage. A few hours in the cockpit and you're pretty much at home. It's important to remember that Comanches are slippery. If you're accustomed to Cessna singles, you'll be sure to notice that speed reductions will take some time and require some advance planning. Of course, this makes itself most evident in the landing phase. The 250's pilot's operating handbook recommends 82 mph/71 kt as a final approach speed, but if you've been doing 90 kt on base you'll be busy lowering flaps, S-turning, or using other techniques to both go down and slow down safely.

Most of the grumbling you hear about Comanches has to do with landings. Close to the runway, those laminar-flow wings ride deep in ground effect. If you're too fast, the airplane can float and float while you bleed off airspeed. Impatient pilots who try to force the airplane onto the runway at too high an airspeed can easily find themselves rewarded with wheelbarrowing on the nosewheel. The airplane has a large nosewheel (actually, it's the same size as the main gear) and, together with the main gears' stubby struts, the landing-gear geometry lends itself to nosewheel-first arrivals, premature liftoffs, and wheelbarrowing. The moral: Make sure you're at the proper airspeed and attitude the moment you touch down. Comanches can be cruel to the sloppy

Today most Comanches are well-worn. Recurrent ADs and other aging-airplane issues keep the cost of annual inspections up. On the other hand, the Comanche 250 promises comfort, cruise speeds, and good looks comparable to other single-engine retractables costing much, much more to buy and operate.

For those willing to handle the maintenance and invest in avionics upgrades, the result can be an exemplary classic airplane. And one of the best-looking Piper singles ever built.

The aircraft is powered by a Lycoming O-360-A and is rated at 180 horsepower. It is a four cylinder, normally aspirated, direct drive, air cooled, horizontally opposed, carburetor equipped engine.

The fuel for the Comanche is carried in two rubber-like fuel cells located in the inboard section of the wings. Capacity of these cells, which are classified as the main fuel cells, is 30 gallons each. During normal operation the fuel is drawn to the engine from the cells by a mechanically operated fuel pump located on the engine accessory section. In the event the engine driven fuel pump fails an electric auxiliary fuel pump is provided. Fuel quantity is indicated by an electric gauge located in the instrument cluster.