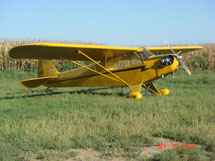 Somewhere in the ether, there is a campfire around which sit those pilots who have long since departed our skies and who gather there to talk about flying. And to a person, I bet those pilots could share with the others a Piper J-3 Cub story.

Echoes from those conversations — both real and imagined — came flooding in when we asked in an issue of AOPA Pilot for feedback from AOPA members who had owned or flown or been otherwise inspired by a Cub. The mailbag was full, each story a gem.

The tale of the J-3 best begins with one of these stories, in fact — one that highlights how the airplane filled its responsibility for teaching the World War II generation and its progeny to fly.

"I was the youngest of four boys, two sets of twins just 13 months apart," says Wray Fleming, AOPA 126751. "My father practiced medicine on [Maui] and caught the bug of flying in 1941. He began lessons in an Interstate but was interrupted by the bombing of Pearl Harbor and the ensuing World War II." Upon returning to civilian life, his father, known as "Pop," completed his lessons and acquired a J-3. Peter, a friend of Pop's, was an auto-racing enthusiast and flight instructor, and Pop owned a 1939 Ford, which he traded to the man for flight lessons for his sons. "Peter patiently taught us four boys the mysteries of flight; each of us got to solo," says Fleming. "One of the greatest moments in my life was when Peter got out of the J-3 on the side of the runway at Kahului, Maui, Hawaii, and said to me, 'Take her up yourself.' For a 16-year-old, flying up there alone — solely in control, over the cane fields in the Maui skies and tropical winds — was true freedom. Needless to say, Cub yellow is still my favorite airplane color."

Most of the early, prewar J-3s were painted that iconic yellow with a black lightning bolt and bear on the tail — the yellow color originated with the predecessor J-2 model — and to this day that remains the most popular way to dress a Cub. Other models followed, but this paint scheme wasn't often altered until the advent of the PA-11 Cub Special in 1947, its paint a primary blue.

The lineage of the J-3 begins before William Piper's partnership with C.G. Taylor in 1930. The Taylor Cubs deserve their own article — and it would take one to describe the complex relationship between Taylor and Piper, as the two worked together and ultimately parted ways (see "Mr. Taylor's Cubs," July 1986 Pilot). One of Taylor's Cubs, the J-2, continued in production by the Piper Aircraft Corp. after the new company set up shop in Lock Haven, Pennsylvania. Piper engineer Walter Jamouneau (who had previously worked for Taylor Aircraft) started in on an update to the J-2 in late 1937; that aircraft, with its extensive changes, became the J-3.

With numbers like that, combined with the J-3's simple design and low hourly operating costs, if you have enough scratch for a second car, you probably can find a decent J-3, afford to buy it, and afford to fly it. Bring a couple of friends together on the deal, and it can become downright cheap, as far as aviating is concerned. What William Piper intended as an airplane for everyone still is, with a couple of minor caveats.

Because the J-3 meets the new light-sport-aircraft guidelines, there has been a resurgence of interest in the airplane — both in the original and in remakes of the design. And while the new light sport aircraft that claim "Cub" in their titles have made significant upgrades, the essence of the design — the wing, the geometry, the flying characteristics — remains true to the original. With so many reasonable airframes (in price and in condition) to ferret out and rescue with restoration — or simple upkeep — many pilots are finding that the old Cub is still the best Cub.

Flying the J-3 requires you to lead with the rudder just a bit — there are airplanes of its vintage with far more adverse yaw to overcome. And while the airplane's climb rate (with the 65-horsepower Continental A-65 up front) won't set your hair on fire, you're not climbing that high anyway. A Cub is meant to be flown low. On a summer evening, this means within shouting distance of a friend on the ground, given the right circumstances. Not that we'd know this for a fact.

Stalls are benign, and spins come about in a lazy fashion. This is a trainer from the days when trainers spun on a daily basis. Just don't completely horse up the recovery inputs, and you'll come right out. In fact, if you hand control back over to the airplane, you'll also come out, given a reasonable amount of altitude.

Landing is where the challenge lies, as long as there's no sideways impulse for the airplane to follow, the gear is happy to absorb quite a bit of bounce (as I proved several times). The key is avoiding drift — the J-3, like other tailwheel airplanes, won't correct for you like a Piper Cherokee might. Any bad habits in this area will land you in the weeds.

Things to note: Understanding the fuel tank capacities, the fuel gauge — a wire that sticks out of the cowling is attached to a float and gives an immediate reading (albeit not a very precise one) of the relative amount of fuel in the tank — and the fuel selectors can help you avoid fuel-exhaustion and starvation accidents. In a low-powered airplane, turning the carb heat off during a takeoff or go-around is critical — and turning it on at the appropriate time more critical still, since the Continental carburetors do ice up.

More good news? The airplane burns at the very most 5 gallons per hour — and can be coaxed to sip less. This is why the standard 12-gallon header tank is adequate, if not ideal, though wing tanks are a common upgrade. Smith points out that a 1985 airworthiness directive addressed problems of fuel contamination that occurred as rainwater entered the header tank through the stainless-steel wire fuel gauge. Airplanes that are in compliance with the AD have fuel drains installed at the low point of each tank — those drains are not original equipment.

Insuring the J-3 — as long as you're not giving instruction in it — won't wipe you out financially, since the hull value is relatively low, and the liability envelope relatively small. Since most accidents in the series tend only to hurt the airplane, with a reasonable amount of training and some tailwheel time you can be insured.

A review of the marketplace reveals a number of J-3s for sale, varying from projects untouched for decades to recently restored champions. A bigger engine commands more, as do upgrades such as generators and starters, and any recent restoration.

While the manufacturer no longer fabricates J-3s or Cub parts, the airplane is well supported by Univair and The Wag-Aero Group, which manufacture and vend parts for just about the entire airplane.

"To the uninitiated, you can't explain it; to those who know, no explanation is necessary." This truism is from Jack Lakeman, who bought his "Super" J-3 (with a Lycoming 108 engine) from Marion Cole (head of the famed Cole clan of aerobatic pilots) in 1970. His wife, Sylvia, learned to fly in this J-3, along with his younger son. The Lakemans still have their J-3, and there can be no better testimony to the brand than the fact they have owned their Cub for decades — and they have a lot of company. See the original article:

The Cub is a two place, high wing, single engine airplane equipped with conventional landing gear. The fuselage frame is constructed of seamless steel tubing welded at the joints to form a rigid structure.
This airplane is certificated in the normal and utility category. See the aircraft’s P.O.H for approved maneuvers. The airplane is approved for day and night VFR/IFR operations when equipped in accordance with F.A.R. 91 or F.A.R 135.

The airplane is powered by a horizontally opposed, four cylinder, direct drive, air cooled, normally aspirated, carbureted engine. The engine is a Continental Model A-65-8 and is rated at 65 horsepower.

The fuel tank is located in the fuselage just behind the fire-wall, and has a capacity of 12 gallons.