Get the app Get the app
Already a member? Please login below for an enhanced experience. Not a member? Join today
Pilot Resources Aircraft & Ownership Aircraft Fact Sheets Piper Malibu/Mirage 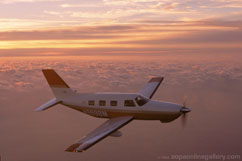 The Piper Malibu Mirage is as close as you can come to a "no excuses" piston single. Its 350-horsepower Lycoming TIO-540 engine lets you cruise at altitudes up to 25,000 feet and true airspeeds as fast as 225 knots. With a full load of fuel and a long-range cruise power setting, Piper claims the Mirage can fly three people about 1,450 nautical miles and land with IFR fuel reserves. At high-speed cruise, maximum range is a respectable 980 nm.

Newer Mirages, as in the ones produced in the mid 90’s, come with known-icing certification and a Bendix/King RDR-2000 color weather radar, complete with vertical profiling capability. Add lightning detection equipment and you've got a fighting chance at dealing with most adverse weather.

Then there are the aesthetic, ergonomic, and tactile aspects of the airplane. Leather seats, a relatively wide cabin, and inflatable lumbar support for the pilot and copilot seats make for a very comfortable ride. And its handling qualities are admirable. Control forces are light in all axes — surprisingly so in the roll axis, given the 43-foot-long wing span. There is a proclivity to yaw in turbulence, and this is no doubt because of the interactive effects of the wings' high aspect ratios and the longitudinal short coupling. This is where the yaw damper comes in handy.

Hailed, reviled, then resurrected — all against the backdrop of a faltering parent company tainted by bankruptcy — the Mirage's strengths have sustained the marque through thick and thin. With 41 slated for production in 1995, the Mirage was expected to account for 40 percent of Piper's total anticipated sales of 173 airplanes and outsell every other model that the company was producing. It was Piper’s strongest player in its effort to recover from bankruptcy, and it's still more popular than ever.

The aircraft is powered by a Continental TSIO-520-BE and is rated at 310 horsepower. It is a six cylinder, turbocharged, direct drive, air cooled, horizontally opposed, fuel injected engine.

Fuel is stored in two main integral wing tanks, located outboard of the mid-wing splice. Fuel quantity held by each wing tank is 61 gallons. Each collector/sump tank has a submerged, electric, centrifugal fuel pump having 2 speed selections available. Low speed in intended for vapor suppression at altitude and may be used during normal engine operation both on the ground and in flight. The high pump speed should only be used in the event of an engine failure if an engine-driven pump failure is suspected. Fuel quantity is indicated by gauges located above the fuel selector handle.