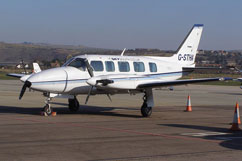 The introduction of the first Navajos in the late summer of 1966 represented Piper Aircraft’s move into the world of big aircraft. Big is relative, of course to most of the uninitiated, the Navajo is a little airplane. After all, even DC-9s are a little airplane.

But to most pilots the Navajo is big. And, just as it represented a fundamental change to Piper, moving into a Navajo represents a big change to the average pilot.

In the mid 1960s, the Navajo was one of just a handful of new cabin class, general aviation aircraft. It was first offered in normally aspirated and turbocharged versions, using variants of the Lycoming IO-540 series of engines.

Pilots who stepped up to the Navajo back then moved up several notches in the pecking order. It was big, looked tough and was cabin class, air-stair door and all.

It helped if other pilots did not catch on to a little secret: The Navajo was – and still is – one of the easiest-to-fly twins around, so long as everything is working properly.

Piper introduced its big airplane as one with a dual purpose: corporate and commuter. It caught on in both markets and continues to show up on the ramps of busy airports around the world in airline colors, quite often with fuzzy-faced youths sporting their first airline pilot stripes.

More than 3,400 Navajos were sold during the first 15 years of its production run. The model has changed and developed, yet has remained very much the same. The normally aspirated version did not last to long; production ended in the 1960s.

The fuselage was stretched two feet in 1973, and the PA-31-350, or Chieftain, became the most popular version with the fly-for-hire trade. It has outsold all other Navajo models. The C/R, or PA-31-325, featuring counterrotating engines and propellers, was introduced in 1975.

Whether the form of the Navajo followed function or vice versa, it is a successful blend of good looks, good flying characteristics and utility. It can please both the pilot and the passengers, particularly in a corporate configuration. In the high density, commuter configuration, things get a bit cramped, and weight and balance calculations become more critical.

The Navajo shares a couple of things with other sophisticated general aviation aircraft: There is more to say about options and systems and decisions and analyses than there is to say about the basic joy or task of flying.
For the properly trained and properly prepared pilot – and I do not mean a super pilot – it is a delightful and simple aircraft to fly. Vmc is lower than the stall speed in landing configuration. Minimum intentional speed with one engine inoperative is 87 KIAS. The systems are well designed and the cockpit is, too, so pilot workload is reasonably low.

Control response and harmony are good, even at slow, slow airspeeds, so that the Navajo feels less like a 6,500 pound airplane than quite a few that are, in fact, lighter.

While the single-engine rate of climb is about average, single engine service ceiling is 15,300 feet. More importantly, the airplane behaves reasonably well if one engine fails during departure and the pilot is trained to handle the situation and prepared to accept it.

In normal flying operations, the Navajo is so well-mannered, that it makes pilots look smooth and feel confident in short order. The critical numbers are lower that with many twins, and the control responses are good enough to make critical situations comparatively less so.

The airplane is impressive-enough looking to belie its good manners and make the pilot look like somebody special.

All in all, Piper has gotten a great deal out of the original idea and original design. And aviation has, too.

The airplane is a six/eight-place, low wing, twin engine airplane equipped with retractable tricycle landing gear. This airplane is certified in the normal category. In the normal category all aerobatic maneuvers including spins are prohibited. The airplane is approved for day and night VFR/IFR operations when equipped in accordance with F.A.R. 91 or F.A.R 135. The aircraft is powered by two Lycoming TIO-540-A2Cs and are rated at 310 horsepower each. Both are six cylinder, turbocharged, direct drive, air cooled, horizontally opposed, fuel injected engines. The fuel system consists of fuel cells, engine driven fuel pumps, emergency fuel pumps, fuel injectors, control valves, fuel filters, fuel pressure and flow gauges, fuel drains and non-icing NACA fuel tank vents and a fuel selector panel. Fuel is stored in four flexible fuel cells, two in each wing. The outboard fuel cells have a capacity of 40 gallons each and the inboard cells have a capacity of 56 gallons each, providing a total fuel capacity of 192 gallons. The right and left wing fuel systems are independent of each other and are connected only when the crossfeed system is activated. Electrical power is supplied by a 28-volt, direct current, negative ground electrical system. Standard electrical supply equipment includes alternators, starters, voltage regulators, overvoltage relays, an ammeter, a battery, an external power receptacle, circuit breakers, warning lights, switches, and solenoids.