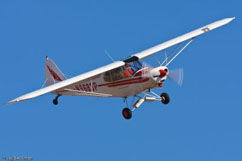 The year was 1930; the man at the drawing board was C.G. Taylor.  His task was not easy.  The company treasurer had ordered him to design an airplane what would be inexpensive to buy, cheap to maintain, and easy to fly.

The Piper J-3 Cub, a 1937 derivative of Taylor’s original, was a machine of modest performance even in its heyday.  It was a cloth covered tandem seater with a metal-tube frame and 65 horses to pull it.  Cruise speed was a modest 75 mph, it climbed at 450 fpm, and its tank went dry after 200 miles.  But the airplane fit Piper’s order exactly.  It was durable, docile, cheap to operate and cost about $1,500.  For all these reasons, 14,125 Cubs were sold by Piper by the time production ceased in 1947.

As the Piper line grew in sophistication, following World War II, the Cub proved to be a nettlesome ancestor.  For when the name “Piper” was mentioned, the image of a tiny, two-place “putt-putt” came to mind.  That image could hardly benefit a company working up to production of its first light twin, the Apache.

The name “Cub,” and the vision of that high-winged silhouette, had to be downplayed for the good of the company. Largely for this reason, one Piper aircraft then in production was all but ignored in company advertising and promotion.  It is a high-winged, fabric-skinned tandem seater.  Yes, it’s a Cub – a Piper Cub, which, in deference to certain refinements over the original, is called the “Super Cub.”  But lordy, how it takes after its father.

The tail’s a bit longer than that of the old J-2, there’s a 150-hp Lycoming up front where the four-banger Continental used to be, and the Lycoming’s hidden behind a curved metal cowl.  Flaps and twin wing tanks were also added, but these modifications are just variations on a theme.  This is very much a Cub.

Aside from the company’s low-key treatment of this Cub, another reason one hears little about the plane has to do with the specialized roles it plays today, far from the madding crowd.

The original J-3’s principle role was that of trainer.  It is said that more American pilots in World War II learned to fly in Cubs than in any other aircraft.  For the Cub was the primary aircraft of the Civilian Pilot Training Program, the federally assisted program through which tens of thousands of wartime pilots won their wings.

Following the war, however, trainers with tricycle gear, side-by-side seating, and aluminum fuselages and wings began winning student pilots away from the Cub.  The Piper classic had to find a new role if it was to survive.

The job it signed on for was that of jack-of-all-trades.  Not only did it survive in the bush, it thrived.  Wherever there was a need for a working airplane, but little in the way of airplane accommodations, the Super Cub was exceedingly popular.  In Alaska, in northern Canada, in the western range land, the new Cub worked steadily as air taxi, ambulance, delivery van, and mail truck.  When the job to be done called for low, slow, and steady airwork, such a border and pipeline patrol, fish spotting or banner towing, the Super Cub could do it all.

According to the book, a Super Cub needs only 350 feet of runway for landing and takeoff, and it can spend a merry lifetime clomping along at 50 mph.  Tear a wing and you can patch it in the field and pick almost any field; the gear can take it. Despite its light weight of 930 pounds empty, the Super Cub is a rugged bird with a skeleton of welded steel tubes and a lifetime Ceconite skin.  The wing ribs and spars are aluminum, and the O-320 Lycoming is as reliable as they come.

Jim Porter, head of Cardinal Aviation in the 1970’s, a Piper dealer and FBO at Columbiana County Airport in East Liverpool, Ohio, agreed to let us take his new Super Cub for a spin at the factory before he took it home.

“The Cub isn’t the most comfortable plane in the world,” recalled Porter, “but we all preferred it.  I can’t tell you what it is about the Cub – it’s just that you know it’ll get you there.”

If the Super Cub’s silhouette, its tail wheel, and its fabric and stitching aren’t enough to convince you that it’s an aeronautical anachronism, one fact will:  It has no keys.  Flip both mag toggles and hit the starter.  That’s all there is to it.

Time was running short, so the moment had come to fly.  With both 18-gallon tanks full of 80 octane and two 170-pound men aboard, the Super Cub was about 150 pounds shy of its 1,750 pound certificated gross weight.

Proper rotation speed is apparently a matter of pilot preference and experience, for no mention is made of it in the owner’s manual.  We climbed at 75 mph, the best rate, and at 4,000 feet were still showing 800 fpm.

Stalls, power on and power off, full flaps and clean, were all very mild.  In each case the break came below an indicated 40 mph, and recovery was very quick.  Recovery form the power-on stall was sloppy, and yet only 100 feet of altitude was lost.

Approach speed for landing was 70 mph.  With half flaps the landing roll was well within the 725 feet listed for obstacle-clearance arrivals.  Such was our introduction to the Super Cub, unheralded workhorse of the Piper line.

“We’re proud of the Cub heritage,” said one Piper spokesman.  “We don’t advertise the Super Cub specifically, because the people who buy the airplane know we build it.  We want to tell the world about what’s new at Piper,” he continued.  “There’s not much point in telling them about a Cub.”  He’s right you know.  Everybody had heard of the Piper Cub.

The Super Cub is a two place, high wing, single engine airplane equipped with conventional landing gear.  The fuselage frame is constructed of steel tubes welded together to form a rigid structure.
This airplane is certificated in the normal and utility category.  See the aircraft’s P.O.H for approved maneuvers.  The airplane is approved for day and night VFR/IFR operations when equipped in accordance with F.A.R. 91 or F.A.R 135.

The airplane is powered by a horizontally opposed, four cylinder, direct drive, air cooled, normally aspirated, carbureted engine.  The engine is a Lycoming Model O-320-A2A and is rated at 150 horsepower.

The airplane fuel system consists of two 18 gallon tanks, one in each wing.  A small header tank which serves to maintain constant fuel flow to the engine regardless of the attitude of the airplane, is included in the installation of each fuel tank.  Fuel indicator gauges are installed in the upper cabin panels and are easily discernible from either seat.