Get the app Get the app
Already a member? Please login below for an enhanced experience. Not a member? Join today
Pilot Resources Aircraft & Ownership Aircraft Fact Sheets Piper Tomahawk 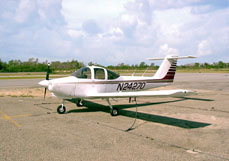 A lot of pilots met their first Tomahawk during primary training. But it looks more like a time machine than a run-of-the-mill trainer, with its double doors and bubble view. And this is one time machine that almost anyone can afford — for less than the price of a convertible, a pilot can expand precious weekends by spending more time at a destination and less time getting there.

When the original Piper Aircraft Corporation first conceived a new trainer in the mid-1970s, the company polled CFIs to determine what traits this airplane should have. The Tomahawk delivers what these special customers ordered: an airplane that provides honest response to pilot inputs, a comfortable cabin with great visibility, and big-airplane-style handling. Cockpit layout is geared for safety, with the fuel selector front and center on the console.

Flight instructors we spoke to feel strongly that the Tomahawk does what Piper intended.  "The student is well trained, and they can't get away with some of the things they can in other trainers," says Jim Tafta of Richmond Flight Center in West Kingston, Rhode Island.  The feedback is overwhelmingly positive, with one caveat: This airplane, though a trainer, still demands proper training of its pilots from a qualified instructor. Those with the training have flown the Tomahawk for thousands of hours without incident.

Just fewer than 2,500 Tomahawks were produced in model years 1978 to 1980, with the most units produced from 1978 to 1979. Aftermarket kits for the rear wing spar, vertical fin attach plate, and rudder hinge were developed to address several airworthiness directives (ADs) that were issued soon after these models hit the ramp. In 1981 and 1982, the Tomahawk and Tomahawk II were made with many of the ADs taken care of at the factory. These later models are preferable, as the installation of AD kits in the field was accomplished with varying degrees of accuracy. Aircraft with these field ADs may exhibit divergent flight characteristics from the standard Tomahawk because of what are considered vague installation instructions from Piper, according to several A&Ps we spoke to. Of course, as the gods of economics would deviously demand, fewer of the later models were produced as steeply rising interest rates and a soft economy helped send new aircraft sales to the basement in the early 1980s. Annual production runs during 1980 to 1982 were less than 200 aircraft a year — not even one-quarter the yearly production of Tomahawks in 1978 and 1979. It's no surprise that prices steadily increase with model year.

Original Tomahawks rolled off the line with basic VFR instrumentation. The so-called "Special Training Package No. 1" gave the airplane gyros, external and internal lighting, dual brakes, one (then) King nav/com and transponder, an ELT, and a heated pitot tube — for a total price of $19,730.

Pilots need special training because of the way the airplane was designed to stall and spin. The wing design, the same basic section as the one on the less common Beech Skipper, was a cutting-edge airfoil — the NASA-generated GA (W)-1 — in the late 1970s. On the Tomahawk airframe, the wing produces aggressive stall characteristics suitable for teaching primary students about stall recognition and recovery. However, that design led to a higher incidence of stall/spin accidents, perhaps because the airplane cannot simply fly itself out of a spin like other trainers — it wasn't meant to, so that students would learn proper control inputs. This is one airplane where it pays to know the territory.

The Tomahawk controls have a heavier feel, as they were designed to mimic those of a much larger airplane. In addition, the T-tail delivers reduced elevator control response at low airspeeds — and this is actually reflected in the accident reports to a larger degree than stall/spin issues. During the takeoff roll, the elevator becomes effective at around 35 KIAS. If the pilot has been impatient and is holding greater back-pressure in an attempt to raise the nose before this point, the airplane will overrotate. The same effect reverses on landing, "especially when a headwind shears off," according to Adam Harris, director of maintenance at East Coast Aero Club at Hanscom Field in Bedford, Massachusetts, who has owned four Tomahawks over the years. These are simply attributes of an airplane that doesn't fit the standard mold, Harris points out. "We rent them to people with 10 hours and they always come back."

In fact, if you're looking for an airplane to provide a steppingstone to a larger aircraft, the Tomahawk makes a sound choice. You face an easier transition in the long run because of these big-airplane characteristics.

The aircraft is powered by a Lycoming O-235-L2C and is rated at 112 horsepower.  It is a four cylinder, normally aspirated, direct drive, air cooled, horizontally opposed, carburetor equipped engine.

The electrical system includes a 14-volt, 60-ampere alternator, a voltage regulator, and over voltage relay, a battery contactor and a 12-volt 25-ampere hour battery.