Get the app Get the app
Already a member? Please login below for an enhanced experience. Not a member? Join today
Pilot Resources Aircraft & Ownership Aircraft Fact Sheets Piper Warrior 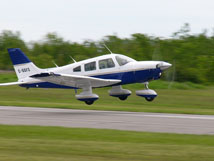 Warriors are primarily distinguished from their Cherokee predecessors by their double-tapered wing planform and two-foot-wider wingspans. Earlier Cherokee wings have the blocky, squarish, constant-chord wing planforms that came to be known as "Hershey Bar" wings.

The first of the Warrior series came out in 1974. (Those in the first model year were actually given the Challenger appellation but this was quickly dropped in favor of the Warrior name, to stay consistent with the rest of Piper's Native American-inspired nomenclature.) Warriors carried the PA28-151 designation and racked up 1,898 sales until 1977. That's when the Warrior II (PA28-161) came out. This airplane had 10 more horsepower and was a big hit, with 3,374 sales. The Warrior II advertised a 127-knot cruise speed at 75-percent power (compared to the Warrior's 109 knots). Part of the speed increase was from the more powerful engine; the rest came from improved wheel-fairing aerodynamics. From 1988 to 1990, some Warriors were dubbed Cadets, which were aimed at the trainer market, featured an austere trim package, and could be ordered with either VFR or IFR avionics.  This airplane is still in production today, as the Warrior III model.

From its inception, the PA-28 was meant to be an inexpensive airplane that offered benign (safe) flight characteristics and reasonable performance. The stabilator, sometimes described as a flying tail, is one of the Warrior's distinguishing features. The entire horizontal tail pivots as one to act as the elevator. While it gives pilots a lot of pitch control, the stabilator was primarily used because it was considered more economical to build than a conventional stabilizer/elevator.

This philosophy - lower manufacturing costs - influenced the wing design as well. PA-28 Cherokees have stubby, constant-chord wing planforms similar in shape to another product with roots in Pennsylvania - the Hershey chocolate bar. The inboard portion of the Warrior's wing retains that Hershey bar shape, but the leading and trailing edges of the outer panels taper. This gives the Warrior a longer wingspan than the Hershey bar wing and, thus, a higher aspect ratio (the proportion of the wingspan and the wing chord).  In general, a higher aspect ratio contributes to better climb and cruise performance because of lower induced drag.

The tapered portion of the Warrior's wing also incorporates some washout. Stand at the wingtip and sight down the leading edge, and you'll notice that the leading edge twists slightly downward near the tip. This decrease in the angle of incidence means that even when the wing root area has stalled, the outer portion of the wing continues to generate lift and the ailerons remain effective. All of that means the airplane is more controllable in an aerodynamic stall.

The airplane is a four-place, low wing, single engine airplane equipped with fixed tricycle landing gear, having a steerable nose wheel and two main wheels.  The basic airframe, except for a tubular steel engine mount, steel landing gear struts, and other miscellaneous parts is of aluminum alloy construction.

Fuel is stored in two twenty-five gallon tanks.  Each tank is equipped with a filler neck indicator tab to aid in determining fuel remaining when the tanks are not full.  The tanks are secured to the leading edge of teach wing with screws and nut plates.  An auxiliary electric fuel pump is provided for use in case of failure of the engine driven pump.  Fuel quantity and pressure are indicated on gauges located in the engine gauge cluster on the instrument panel.