Ponying up the Skyhawk

Cessna never dives headfirst into anything. The company took a very conservative approach to restarting its single-engine production line and has received plenty of bashing for announcing that it was to reintroduce what many called "the same old airplanes."

As a longtime co-owner of a 1975 Cessna 172M who has had the privilege of flying the new Cessnas, I can tell you that they're not the same old airplanes. On the same 160 horsepower, the new R models are faster, exponentially safer, and have panels and interiors befitting the '90s. My Skyhawk is a 110-knot ride that still has boat-anchor-quality ARC radios and an interior shade of green that only a '70s lounge lizard could appreciate.

Cessna-slamming continued when the company announced that it was going to stick with a 160-hp powerplant by derating what is normally a 180-hp engine. Many people thought Cessna should have just come out with the 180-horsepower 172 in the first place, since the many aftermarket 180-horse conversions are so popular with owners of older Skyhawks. Those in the know threw up their hands wondering why the manufacturer was installing a heavier engine and then derating it. Mostly, it was because Cessna's customers only wanted 160 hp. Most flight schools, the source of Cessna's largest orders, did not want the extra fuel burn of a 180-hp engine.

The P-model Skyhawk, which ceased production in 1986, was powered by a carbureted Lycoming O-320, which was another item Cessna and the majority of its customers didn't want for the new airplanes. Therefore, the decision to use the derated IO-360 in the new R models was made to provide fuel injection, retain 160 hp to keep fuel burns low, and reap the benefits of a very quiet 2,400-rpm redline in order to be a better neighbor. The low redline opened up the large but noise-sensitive European market to Skyhawk sales. But, perhaps the biggest reason Cessna used the IO-360 was so that - say a few years after restart of piston production - it could very easily make a 180-hp version of its new Skyhawk. And here we are a few years later.

Derating the IO-360 to life in the 172R was a simple affair - Cessna simply bolted a higher-pitch, 75-inch-diameter prop on the 172R, which redlines the engine at 2,400 rpm. To return the engine to 180 hp, Cessna simply has to change the prop to a size and pitch that allows the engine to spin up to 2,700 rpm. Voilá, a "new" airplane easily designed and easily built to fit nicely into the company's Independence, Kansas, production line. So goes the story of how Cessna created its new 172S Skyhawk SP. Well, almost.

To further distance the SP from its lower-powered stablemate, Cessna has made a leather interior standard equipment. Ordinarily, leather is a $2,500 option on the R model. The leather is the same as that used in Cessna's Citation business jets, so quality should not be an issue. Cloth interiors are available for the SPs - but, sorry, no credit will be issued to those who order them. In addition, a distinctive set of decal graphics will be used on the SP. Besides those changes, the only way to distinguish a 172R from a 172S is to look at the redline on the tachometer.

Sure, $16,200 is a lot of money for a different prop and cattle hide - but there's more. The SP models will have a 100-pound maximum gross weight increase to boost the 172's load-carrying ability. So far, the aftermarket holders of 180-hp STCs for the R model have not been able to increase the max gross weight of their conversions, but that may change. Air Plains, of Wellington, Kansas, is waiting for approval for a 100-pound gross weight increase for its $6,500, 180-hp R-model conversion.

Our evaluation copy of the new SP had a 914-pound useful load. Fill the tanks with four hours of fuel (approximately 40 gallons) and you'll have enough load left over to carry four 170-pounders, or three and lots of baggage. Full fuel (53 gallons usable) can keep you aloft for 4.5 hours with reserves and still leaves capacity for three adults and 80 pounds of gear. The engine burns about a gallon and a half more per hour than it does in the R model, so overall range at 75-percent power (8,500 feet) is about 518 nautical miles, compared to the R model's 580-nm range at 8,000 feet.

Cessna expects its customers to be those who need that little something extra for hot-weather/high-altitude performance. One such customer is Embry-Riddle Aeronautical University's Prescott, Arizona, campus. Prescott's Ernest A. Love Field lies at an elevation of 5,042 feet. On a warm day, density altitudes can reach higher than 7,500 feet. Load two students and their instructor into a 172R and you can imagine the pucker factor on takeoff, even with a light load of fuel.

Our flights with Cessna's demonstrator, N407ES, showed that the airplane performed better than book speeds, partially attributed to the fact that we were 140 pounds below the maximum gross weight. With three aboard and full fuel, the SP managed a 750-fpm initial climb rate at a density altitude of 1,100 feet. Level at a pressure altitude of 5,400 feet and 2,525 rpm registering on the tach, the SP trued out at 126 knots, while indicating a fuel burn of 9.5 gallons per hour. Using a portable decibel meter, the new Skyhawk SP shows that it is a relatively quiet machine, registering a reasonable 89 dBA at ear level in the front seats. My 1975 Skyhawk scores 92 dBA under the same conditions, which says something for the soundproofing used in the new models. R models, with their slower-turning props, are noticeably quieter still.

Anxious to test out the Skyhawk's new ponies, we took the SP to a few grass strips on Maryland's Eastern Shore for a short- and soft-field workout. With the same three people and nearly full fuel, the SP was 170 pounds under the max gross weight. Using 15 degrees of flaps, the Skyhawk lifted off after a 1,200-foot uphill ground roll. Using the best-angle-of-climb airspeed, the SP crossed 200 feet over the departure threshold of the 2,400-foot runway - not bad, considering it was a humid shorts-and-T-shirt kind of day.

The SP is noticeably heavier in the nose than O-320-powered Skyhawks, which we thought would hurt the airplane's soft-field performance. However, the added thrust blowing over the fully deflected elevator provided more than enough authority to pick the nosewheel up out of the muck, even when the airplane was at a near-standstill. It's nice to know that despite the new-airplane tightness, the fancy panel gadgets, and plush interior, the new Skyhawks have retained their exceptional short-field performance - this 180-hp SP variant is far better in these conditions than anything else in the fixed-tricycle-gear, 180-hp-single class.

Cessna expects to sell one SP for every three or four R models that roll out of the Independence assembly facility. Cessna expects typical buyers to be those not quite ready for the initial cost, fuel burn, and complexity of a 182. The SPs will have the same options list as the R model: Standard equipment includes a AlliedSignal Bendix/King Silver Crown Plus navcom, transponder, and KMA 26 audio panel/intercom. The Nav I package adds a second navcom with glideslope, VFR GPS, and ADF. The Nav II package exchanges the VFR KLN 89 GPS for an approach-approved 89B version and adds a single-axis autopilot.

In terms of production, you have to be somewhat envious of how efficiently Cessna upped the power of its Skyhawk. In the automotive world it's done the same way - at the end of the production line one car goes in the plain-vanilla wrapper, while the other gets a larger V-6 engine, fatter tires, some fancy body cladding, and a 15-percent hike in the sticker price. Many buyers are fully aware that the car they're buying is a gussied-up version of something else, but they buy it anyway. In the case of Cessna, the sticker cost of the SP is about 10 percent over the cost of the standard model. And, if it works in the automotive world without people hounding the manufacturers about the cost, it will probably work for Cessna. 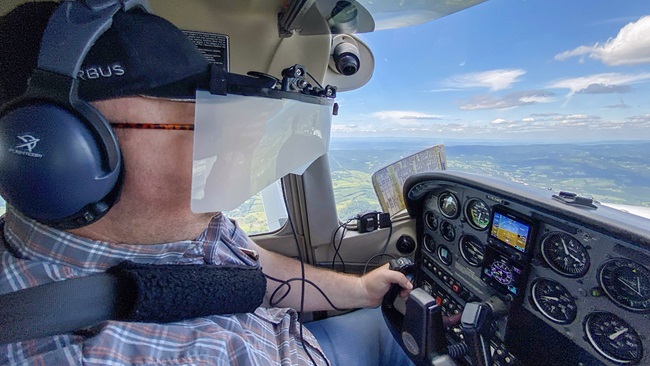