Get the app Get the app
AOPA will be closed July 4th, in observance of the Independence Day holiday. We will reopen at 8:30 am ET on Tuesday, July 5.
News & Media Washington airport stems the tide

By Nathan A. Ferguson 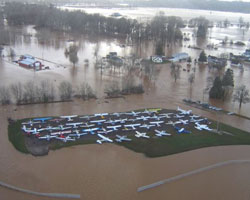 Planning ahead spared many aircraft owners in Washington state from seeing their airplanes turn into submarines.

Rising floodwaters on Dec. 3 from the Pacific Northwest storms submerged the Chehalis-Centralia Airport in the southeastern part of the state. The Chehalis and Newaukum rivers are prone to flooding during heavy rains, so the airport constructed a raised gravel platform where they could temporarily relocate aircraft.

Locals had learned from the 1996 flood. Airport Manager Allyn Roe said this year the water rose 21 inches higher than the previous flood, according to high-water marks in pilots’ hangars. It was eight feet deep in some places. 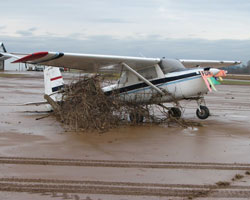 While thirsty Navy and Coast Guard helicopters were filling up on fuel, airport workers and volunteers towed the airplanes to the gravel area as the water rose. Cables stretched across it allowed for tiedowns. They were able to reposition 44 aircraft on a space only designed for 27. The water eventually came up to the airplanes’ axles, which means new bearings are in order. Unfortunately, 14 airworthy airplanes didn’t make it to the high ground.

Money for the project came from revenues from commercial businesses located on the airport’s property. Following a cleanup effort to remove mud and silt, the airport has reopened.