Get the app Get the app
AOPA will be closed July 4th, in observance of the Independence Day holiday. We will reopen at 8:30 am ET on Tuesday, July 5.
News & Media Funding crunch grounds ATG Javelin 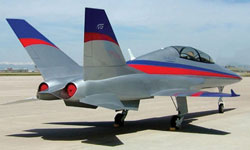 A failure to secure needed financing has led Aviation Technology Group to halt development of the Javelin, a two-seat, twin-turbofan aircraft aimed at the owner-flown and military markets.

Virtually all of the company’s 50 employees were sent home on Monday, Dec. 17, leaving less than a dozen to continue operations at its Centennial Airport, Englewood, Colo., headquarters.

The fate of the $3 million Javelin now appears to hinge on Israel Aerospace Industries (IAI), which partnered with ATG with the goal of producing a trainer/light attack variant for the global export market.

“Further action will be decided upon after proper communication with our strategic business partner,” ATG said in a statement.

Earlier this year, ATG turned to Wall Street in a bid to raise $200 million, but this effort appears to have failed. In the interim, short-term funding from private sources has kept the company going.

George Bye, a former Air Force T-38 instructor pilot, founded ATG in 1998 amid growing interest in the very light jet market. The Javelin is unique among VLJs, however, due to its tandem seating and fighter-style configuration.

Bye has since stepped down, and the company is seeking a new CEO. Control has shifted to the company’s board of directors, which includes Horst Bergmann, retired CEO of chart provider Jeppesen, and Charlie Johnson, a former president of Cessna Aircraft.

Key Javelin components include the Williams International FJ33—one of a new breed of small jet engines designed for the VLJ market—and an Avidyne electronic flight information system. A Javelin prototype flew for the first time on Sept. 30, 2005.