Get the app Get the app
AOPA will be closed July 4th, in observance of the Independence Day holiday. We will reopen at 8:30 am ET on Tuesday, July 5.
News & Media AOPA Air Safety Foundation 2006 Annual Report

At the Flight Levels

The nine new online courses and expanded attendance at safety seminars are direct results of your financial commitment to safe flying. Geared to both private and instrument-rated pilots, new pilots and experienced pilots, these safety seminars are experiencing a rapid climb in attendance, the first fruit of the August and Steven Busch matching gift challenge our members so rapidly and enthusiastically supported.

In 2006 nearly 50 new pilot-philanthropists joined the AOPA President's Council. Chaired by John Nordstrom, the committee has welcomed some well-known pilots, such as Arnold Palmer, who have come forward with a commitment of $50,000 or more. This generosity has rapidly set a new standard for leadership giving in all of GA.

The AOPA Hat in the Ring Society membership continues strong, with many new donors giving at the Silver Hat level of $5,000 or the Bronze Hat level of $2,500, along with the wonderful members of the Hat in the Ring Society who generously give $1,000 year in and year out. The AOPA Life Member Program remains a singular status symbol within GA. More than 100 new life members joined in 2006, each receiving a hand-signed framed certificate from AOPA President Phil Boyer and AOPA Air Safety Foundation Executive Director Bruce Landsberg. We are closing in on the 1,000th AOPA life member since the program began; AOPA life members give a one-time donation of $2,500.

The AOPA Air Safety Foundation Endowment Fund got a real boost through a special fund created by Glenn Plymate and his family to honor the memory of his pilot wife, Erral Lea Plymate. So far more than $100,000 has been raised for the ASF endowment fund, and now a challenge goal of $550,000 has been set to be raised by 2008.

Those who support the Air Safety Foundation's critical programs include The Conrad N. Hilton Foundation through the counsel of lifelong pilot Barron Hilton. With Hilton's multiyear commitment of funding, we have been able to dramatically expand the Pilot Safety Series' distribution of free CD-ROMs to the pilot community. Likewise, with the commitment of The Samuel Roberts Noble Foundation, ASF is now preparing to launch an online four-part refresher series on instrument flying. Watch for IFR Charting in 2007.

On behalf of all pilots and their passengers, we say thank you for your support of a safe future for general aviation.

Gift giving that supports our mission

How was 2006 for the AOPA Air Safety Foundation? Probably the best indicator occurred at AOPA Expo 2006 in Palm Springs, California. There, FAA Administrator Marion Blakey awarded ASF the first-ever Thomas H. Wardleigh Aviation Safety Advocate Award. The award is named after a renowned Alaskan aviation safety pioneer and recognizes national excellence. "We don't give this thing out to just anybody," Blakey said. "The fact is, we've never given it out at all...until today. And I can't think of a more deserving recipient than AOPA's Air Safety Foundation." Blakey noted that in fiscal year 2006, the United States had the lowest number of fatal accidents since records have been kept.

The Wardleigh award honors an individual or organization for making a significant impact on aviation safety; creating innovative training, equipment, or other improvements to safety; and showing leadership in aviation safety, all over a long period of time. The AOPA Air Safety Foundation, established in 1950, is the world's only safety organization dedicated solely to improving general aviation safety. 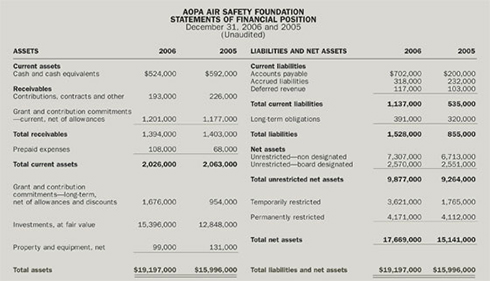 ASF's excellence also was recognized in a very tangible way as AIG Aviation, one of the country's largest insurance companies, started offering accident forgiveness to pilots who regularly participate in ASF's live and online education programs. The AOPA Air Safety Foundation is dedicated to just one goal — making flying safer and easier for general aviation pilots.

These types of recognition are a result of ASF's ongoing efforts in output and outreach — output of online courses, DVDs, and CDs and outreach to thousands of pilots across the country in live seminars and CFI renewals.

ASF added nine online courses to its lineup in 2006. These comprehensive courses are designed to help pilots learn more in less time. These are free, interactive online courses, and most provide a personalized completion certificate and qualify for the safety seminar portion of the FAA Wings program.

In a totally new online project called "Real Pilot Stories," pilots tell of accidents or near accidents in their own words. Topics include an emergency landing on a snowy road, an in-flight icing encounter, a catastrophic engine failure, and an in-flight distraction — a snake in an airplane. These stories typically run three minutes in length, and include audio and graphics to make the misadventures come alive.

Every year, the AOPA Air Safety Foundation offers more than 200 free safety seminars throughout the United States. More than 39,000 pilots attended the live seminars in 2006, and we added an additional 40 programs in some smaller locations across the country.

ASF introduces two new live-seminar series each year, and this year we added a new type of program that allowed the audience to choose the outcome using DVD technology. The first program, Emergency Procedures, focuses on how to handle those nasty "up here wish I was down there" scenarios in which abnormal situations become full-blown emergencies. The second program is on aeronautical decision making — Do the Right Thing: Decision Making for Pilots — and addresses VFR into instrument conditions and an IFR flight faced with changing weather conditions. The programs allow audiences to work through some of the most critical areas of flight and see the outcome of their decisions.

ASF continues to be the national leader in helping flight instructors renew their certificates. Last year more than 10,000 instructors trusted ASF to bring them up to date on the latest regulations and procedures by attending ASF's live Flight Instructor Refresher Clinic (FIRC) or completing the online FIRC, which is offered in partnership with Jeppesen.

Two other special outreach efforts included the Pilot Safety Series, in which ASF sent more than 28,000 free CD-ROMs of Do the Right Thing to new private and instrument-rated pilots to get them started on the right track to safe flight. After the tragic takeoff accident involving a regional jet in Lexington, Kentucky, last fall, ASF sent more than 200,000 free CDs of our popular online Runway Safety course.

Just as pilots monitor the engine gauges, ASF took readings on whether the materials were being used. After the Runway Safety CD mailing, more than 70 percent of the pilots in a follow-up survey (140,000) had completed the course. More than 10,000 online courses were being completed each month. Viewing the online safety database, pilots made more than a quarter of a million queries looking to learn from the mishaps of others.

So how was 2006 for the AOPA Air Safety Foundation? I think the output and outreach speak for themselves. You're going to see a lot more from ASF in the coming months. We're consistently producing educational materials packed with relevant information that directly benefits your personal flying.