Get the app Get the app
Already a member? Please login below for an enhanced experience. Not a member? Join today
News & Media Pilotage

Mark R. Twombly is a writer and editor who has been a pilot since 1968.

Mark R. Twombly is a writer and editor who has been a pilot since 1968.

It was shaping up to be a rare day for riding the airlines—both the departure and connecting flights were running on time. I boarded the connecting flight, settled into my seat, and noticed that the airplane looked unusually clean. A flight attendant confirmed my observation. "Welcome to our two-day-old airplane," he cheerfully announced over the cabin speaker, then added, "just don't look out the right side of the airplane at the guy working on the engine." Of course, everyone looked.

The cowling was up, and a technician had his head buried in the maze of tubing wrapping around the turbofan. "It's a fuel control box, kinda like the fuel-injection system on your car. Nothing to worry about," the flight attendant cooed. "They should have it fixed in a few minutes, and we'll be on our way."

Ten minutes later he was back on the speaker, but this time with forced enthusiasm. "We need to have everyone gather their things, deplane, and go to gate B29. This airplane isn't going anywhere right now, and we have another one ready at gate B29."

Filing out, I wondered how many passengers were feeling uneasy about getting on another airplane to complete their trip. If they were nervous about flying in the first place, this turn of events could well spike their fears. I could imagine what was running though their minds: "A brand-new $75-million-dollar jetliner isn't supposed to break down on day two." "What if the 'fuel-injection system' failed in flight?" "If this next airplane is older, is it in even worse shape?"

Despite those fears, it looked like everyone made the walk to gate B29 and got on the replacement airplane, which performed faithfully. In fact, no matter how fearful they may be of flying, people will travel on scheduled airliners because their need or desire to be someplace is greater than the fear of how they are getting there.

That is not the case in general aviation. When it comes to our passengers, fear can be a no-go factor. If someone is generally fearful of flying, it's likely they will decline to fly in a "small" general aviation airplane in favor of a scheduled airliner, even a puddle-jumping turboprop.

Why? First of all, among the fearful, size does matter. However irrational the thinking, the bigger the airplane, the safer it must be, right? Does that mean you should sell the Cherokee and buy a Citation? If you're able to, then by all means give it a shot. You may or may not be able to coax your reluctant passenger onto the Citation, but certainly you'll have a lot of fun.

Size isn't the only issue. Among the fearful, the flight crew may also be a factor. It's difficult to overcome the perception that two or more highly trained professionals in the cockpit of a scheduled airliner are safer and more competent than a lone pilot in a small general aviation airplane. In many cases that perception is well founded, but convincing a fearful passenger that it is not universally true, especially in the case of their personal general aviation pilot, is a difficult task at best.

Airline passengers can't see or hear their pilots and, strangely enough, that also lends some comfort to the fearful, especially if they've been on a small airplane where every mumble, miscue, and mistake from the pilot is right there to see and hear.

So how do we GA pilots deal with the fearful passenger problem? How do we make them feel comfortable enough to agree to take the Bonanza instead of the Boeing? Words can help. In the absence of communication, people tend to fear the worst. Give them as much information as they will accept about the airplane, their pilot, and the flight. But the loudest and most convincing voice will come from our actions. It's all about how we fly.

It begins with good preparation. Pick a nice day to fly. Eliminate the potential for surprises—know the routing, the airspace, and your airplane and avionics. Be calm and deliberate in the cockpit. Avoid the out-loud "What's the @&+# thing doing now?" rhetorical questioning.

We should also learn from experience, and from our mistakes. A few years ago I was flying my wife and young son to a family get-together in Atlanta. We left in the evening and flew into the night. All was calm at altitude when, suddenly, the left engine began surging. I reached down to switch fuel tanks, and in a few seconds power was restored. Some investigation revealed that the cap on the left-side outboard tank had been porting fuel (stains trailed from the cap), and the tank had run dry. I hadn't been monitoring the fuel quantity gauges, and the mistake left an indelible, fearful impression on my wife.

I got the same deer-in-the-headlights look recently under a different set of circumstances. We were cruising in the flight levels en route to the Washington, D.C., area, trailing some sort of airliner that was a few thousand feet lower on the same heading. The controller cleared us for the initial descent, and a few moments later we were suddenly tossed into a steep left bank. It took just a moment to recover and re-engage the autopilot.

I glanced back at our three wide-eyed passengers, explained that it was a wake-turbulence encounter, and assured them that all was well. The experience won't soon be forgotten, however. Now we have to work hard at quieting any fears that might have been raised back there in the cabin. 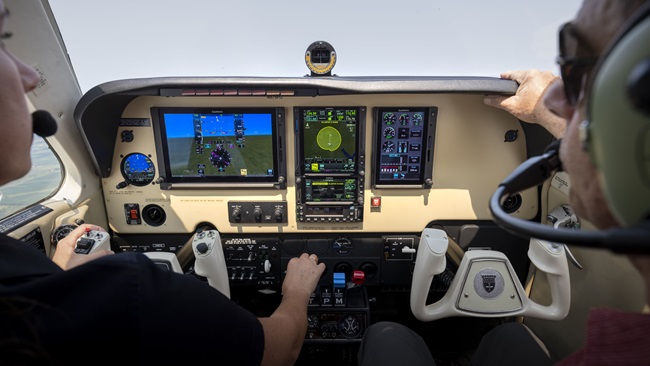