Get the app Get the app
AOPA will be closed July 4th, in observance of the Independence Day holiday. We will reopen at 8:30 am ET on Tuesday, July 5.
News & Media AOPA award goes to 'true friend' of GA 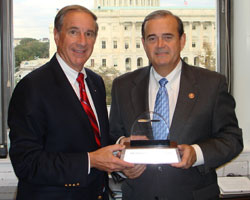 "Jerry is a true friend of general aviation," said Boyer. "He stood strong against the administration's attempt to impose GA user fees, and crafted legislation that would benefit all of aviation." The award was previously announced at AOPA Expo earlier last month, but the press of business in Washington prevented Costello from accepting it in person then.

The Hartranft award recognizes an elected or appointed government official who has done the most to advance GA. In addition to leading the charge against user fees, Costello has taken the lead on many other issues important to GA.

He held hearings on the current state of the flight service station (FSS) system, then demanded that the Department of Transportation ensure that FSS service meet or exceed the standards of the previous FAA-operated system.

Costello has pushed for sensible changes to aviation security, particularly the Washington, D.C., Air Defense Identification Zone. In 2003, he helped negotiate the legislative language that "unlocked" the aviation trust fund and permitted all aviation taxes collected to go toward airports and other aviation programs.

Costello recognizes GA airports as vital national assets, and his support for these types of facilities extends outside his district. He voted to support Meigs Field when the National Aviation Capacity Expansion Act (H.R.3479) came before him in 2002.

The Joseph B. Hartranft "Doc" Award is named for AOPA's first employee and president of the association for 38 years.

See a video of Boyer's speech about Costello from AOPA Expo 2007.