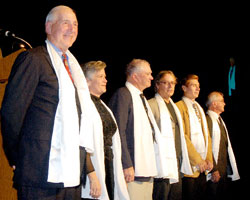 Hal Shevers, founder and chairman of Sporty’s Pilot Shop and Sporty’s Flight Academy, was inducted into the Experimental Aircraft Association’s Flight Instructors Hall of Fame in Oshkosh, Wis., on Nov. 9.

“This award is just one recognition of the tremendous ‘give-back’ to general aviation that has always been a part of Hal Shevers' business career,” said AOPA President Phil Boyer. “I know of no other individual in aviation who, from his own pocket, provides financial support to so many GA causes. Hal has been a passionate innovator and huge supporter of all activities surrounding general aviation.”

A longtime supporter of AOPA, Shevers has been a member of the Air Safety Foundation’s Board of Visitors since 1990 and is a member of the AOPA President’s Council. He supports Aviation Exploring and EAA youth activities, and in March 2007 created the Sporty’s Foundation to help educate young people about the excitement and life-enhancing potential of general aviation.