Get the app Get the app
Already a member? Please login below for an enhanced experience. Not a member? Join today
News & Media Future promising for Cincinnati-Blue Ash Airport 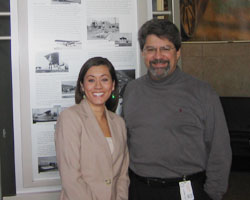 Cincinnati-Blue Ash Airport is on the cusp of turning over a new leaf.

For five years the southwestern Ohio airport faced threats without any protection—federal grants that provided certain assurances the airport remain open and operating had lapsed. Thanks to AOPA’s intervention and a very active AOPA Airport Support Network volunteer, city officials in Cincinnati and Blue Ash have teamed up to protect the airport and build a park and other community facilities, including an aviation museum, nearby.

As part of the agreement between the cities, Blue Ash purchased land for the park from Cincinnati, and Cincinnati, which owns the airport, agreed to continue to operate and improve the airport.

In a meeting this week with AOPA Eastern Regional Representative Erin Wright and AOPA Vice President of Airports Bill Dunn, Cincinnati Airport Manager Fred Anderton said he was preparing a final airport master plan and project list. He expects to complete it by December and then apply for federal Airport Improvement Program grants in January.

“Federal grants are the key,” Dunn said. “Once they use an AIP grant, the airport cannot be closed and access cannot be restricted for 20 years. This is the best protection any airport can get.”

Meanwhile, Blue Ash City Manager David Waltz said the city has committed $2 million in matching funds for the airport’s development. This will help Cincinnati cover the local portion that must be paid for projects that use federal funding.

“Both cities are championing the airport,” said Dunn. “This is one success story that we truly hope will be modeled throughout the country.”