Get the app Get the app
Already a member? Please login below for an enhanced experience. Not a member? Join today
News & Media FAA says San Diego building no longer a hazard 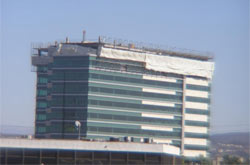 A building near San Diego’s Montgomery Field is finally within FAA limitations by 1.3 feet, ending one chapter in an ongoing legal battle.

The FAA has removed a hazard designation after Sunroad Enterprises finished demolishing the top two floors at a reported cost of $1.1 million. The company told the agency recently that the building is just under the 160-foot height limitation, according to The San Diego Union-Tribune. Sunroad will need to finish the roof and the interior after it receives permits from the city.

[Watch the action through our Web cam. Click on the “time lapse” button at the top of the page.]

AOPA, the city of San Diego, and local pilots fought the developer in an attempt to prevent the facility from being built beyond the FAA’s acceptable limit. Despite a stop-work order from the city, the developer continued constructing the building to 180 feet. The developer began the remodeling job in August following a June edict from the mayor to remove the top two floors.

AOPA previously awarded Richard Beach, Montgomery Field’s Airport Support Network volunteer, with its prestigious Laurence P. Sharples Perpetual Award, for his tireless efforts to protect the airport from an obstruction that was deemed a hazard to air navigation.