Get the app Get the app
AOPA will be closed July 4th, in observance of the Independence Day holiday. We will reopen at 8:30 am ET on Tuesday, July 5.
News & Media AOPA, EAA partner on new Airport Watch DVD 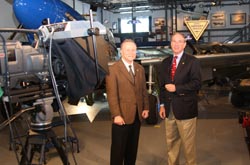 While most folks were recovering from turkey overload, AOPA President Phil Boyer and EAA President Tom Poberezny were working together to improve general aviation security. The leaders of the two largest GA associations devoted some of their Thanksgiving vacation time to videotaping a new introduction to AOPA’s updated Airport Watch DVD.

The DVD incorporates Airport Watch’s slogan, “Lock up, look out,” as a reminder that the vigilance of GA pilots is critical to keeping airports secure from terrorist use.

The Airport Watch DVDs, along with brochures, posters, and decals, will be distributed to all 990 EAA Chapters in December. It’s part of a cooperative program between the Transportation Security Administration and AOPA to continue to enhance GA security. 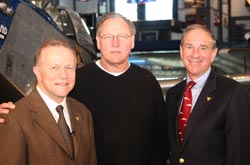 Updated Airport Watch materials will also be sent to the Civil Air Patrol units and airport businesses affiliated with the Aircraft Electronics Association. Boyer and National Air Transportation Association President Jim Coyne earlier taped a special introduction for a DVD that will be sent to FBOs and charter companies who are members of the NATA.

The custom introduction for the EAA version of the DVD was taped in Waukesha, Wisc., in the private hangar of Dr. Tony Buechler in front of his P-51, Petie 2nd. A Piper J-3 Cub and a Pitts S-2B also share hangar space with the P-51. Dr. Buechler is a member of both EAA and AOPA.