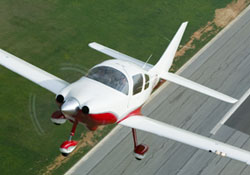 Cessna Aircraft will acquire the assets of Columbia Aircraft of Bend, Ore., following a successful bid for the firm in U.S. bankruptcy court on Nov. 27. Cessna says it wants to “broaden its single-engine product portfolio.”

Cessna’s winning bid was $26.4 million, but the transaction will not be completed until Dec. 4. Cessna officials said Columbia will take on the Cessna name, and the dual-turbocharged 310-horsepower Columbia 400 will become the Cessna 400, while the normally aspirated 310-hp Columbia 350 will be named the Cessna 350. Both use the Continental 550 engine.

Cessna plans to make “significant” investments in the Oregon facility which will become one of Cessna’s six manufacturing facilities. Former Columbia aircraft will be supported by the Cessna service centers and Cessna parts distribution. Cessna plans to contact current owners.

“It only makes sense that we fully embrace these two new aircraft and their owners as members of the Cessna family,” said Cessna Chairman, President and CEO Jack J. Pelton.