Get the app Get the app
Already a member? Please login below for an enhanced experience. Not a member? Join today
News & Media SkyCatcher to be built overseas

SkyCatcher to be built overseas 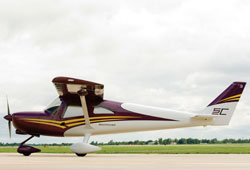 Cessna Aircraft has signed a deal to build its light sport Cessna 162 SkyCatcher at the Shenyang Aircraft Corp. in Shenyang, China.

The 56-year-old commercial and military fighter aircraft company has 16,000 employees and already counts among its clients The Boeing Company, Airbus, Bombardier Aerospace, Spirit AeroSystems (formerly owned by Boeing and located in Wichita, Kan.), and Singapore Aerospace. Shenyang Aircraft, located some 500 miles northeast of Beijing, will assemble the SkyCatcher while Cessna will design it, assure it meets the light sport aircraft standards of the American Society for Testing and Materials, and provide on-site personnel to oversee manufacturing, quality assurance, and technical design.

The two companies began to form a partnership in 2003. Cessna claims 900 orders for the Cessna 162. After the first 1,000 orders, the price will increase from $109,500 to $111,500. Shenyang Aircraft Corp. is a subsidiary of China Aviation Industry Corp., a government-owned consortium of aircraft manufacturers. Shenyang, an industrial town, will host soccer competition during the Beijing 2008 Olympic Games.