Get the app Get the app
AOPA will be closed July 4th, in observance of the Independence Day holiday. We will reopen at 8:30 am ET on Tuesday, July 5.
News & Media Cirrus announces new SR20 model 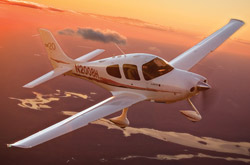 Cirrus Design has announced a new model to commemorate an important anniversary for the company.

In 1998 the FAA certified the Cirrus SR20, the first totally new four-place airplane in two decades. And now, to commemorate the 10-year anniversary, Cirrus has redesigned the airplane, dubbing it the SR20-Generation Three.

The hallmark is a reengineered wing with a lightweight carbon-fiber spar. The larger wing improves climb performance and allows for a higher useful load. The airplane is now available for order with deliveries to begin in early January.

Brothers Dale and Alan Klapmeier started out in the homebuilt market with the VK30 pusher airplane in the late 1980s. They stopped taking orders in 1993 to focus on certified aircraft. They had long sought a fast and comfortable four-place airplane after building an early Glasair.