Get the app Get the app
AOPA will be closing at 1:45pm ET on Tuesday, December 6th. We will reopen Wednesday morning at 8:30am ET.
AOPA Members DO more LEARN more SAVE more - Get MORE out of being a pilot - CLICK HERE
News & Media Flight service gets failing grade, AOPA tells Congress 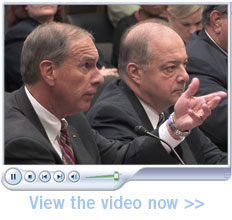 As upset as pilots have been about the spotty performance of the flight service station (FSS) system, members of Congress are equally unhappy.

"We're going to watch this very carefully," said Rep. James Oberstar (D-Minn.), chairman of the House Transportation Committee during an Oct. 10 hearing on the transition to contractor-operated flight service stations. "We'll hold hearings every three months if we have to."

AOPA President Phil Boyer said at the hearing, "My members hate this. They're mad as hell at me." Nevertheless, Boyer said that contracting out flight service was "the right thing to do, and the right time to do it."

That's because the FAA's antiquated FSS system was no longer meeting the needs of pilots and had become increasingly more expensive to operate. The FAA's attempts to modernize the system were years behind schedule and well over budget.

Boyer revealed to the aviation subcommittee a massive, unprecedented FSS study that AOPA had undertaken starting in 1999. That study outlined seven different options for fixing the FSS system, with the preferred alternative of consolidating the existing 61 stations into 20 facilities.


With the congressional scrutiny on the flight service station (FSS) system, is service getting better? According to pilots, there's plenty of room for improvement.

At the end of September, AOPA's statistics and analytics staff surveyed 15,000 pilots about their satisfaction with FSS. Nearly 1,300 who called FSS that month responded about their experiences, creating statistically valid results that give AOPA an accurate picture of the service pilots receive when they call FSS.

Overall, only 64 percent of survey respondents were satisfied with the level of service — a failing grade.

Specifically, 37 percent reported that they had hung up while waiting for a call to be answered; 85 percent were satisfied with briefer professionalism; and only 69 percent gave satisfactory ratings on briefer knowledge.

Pilots who submitted comments with the survey provided telling examples of how the system still falls short of the flight service contractor's promised service levels.

Two reported that they worked with relatively new briefers who had little knowledge. Nearly a handful commented that they use FSS as a last resort, turning to DUAT or DUATS first for weather briefings.

"Clearly the FAA has a way to go in its supervision of its contractor to meet the needs of pilots," said Andy Cebula, AOPA executive vice president of government affairs. "Today's hearing was an important part of the process to get the FSS system back on track."

"Then came the A-76 process [the FAA's study to determine if contracting out flight service would be in the best interests of pilots and the government], and it served as a catalyst for us to turn to our study and say, 'We should support this.' Not privatization, but the outsourcing."

Boyer said that AOPA was initially pleased when Lockheed Martin was selected because of the company's worldwide track record with air traffic control. "This was kindergarten compared to some of the other things they were working on," said Boyer.

He said that AOPA had many meetings with both the FAA and the flight service contractor and emphasized again and again that having briefers with local knowledge would be critical to making the system work effectively for pilots.

When Lockheed Martin first took over the system, things were better than under the FAA. "We got through Hurricane Katrina better that we would have under the old system," Boyer said.

But then the company began transitioning to its own equipment and aggressively closing old FSS facilities. "Thank goodness for DUATS," said Boyer, because that system was there to take the load as the system started collapsing.

And he faulted the FAA, too, for the failures of a too aggressive transition and consolidation. "FAA management announced the contract, said, 'well, we're done with flight service now, we don't have to worry about it any longer,' and then literally walked away."

Aviation subcommittee Chairman Jerry Costello (D-Ill.) agreed, saying, "I firmly believe that the FAA needs to do more aggressive oversight of this contract."

The Department of Transportation's inspector general also faulted the FAA during the hearing for not maintaining oversight and not responding quickly to problems once the transition began.

Boyer noted that a survey of AOPA members conducted within the last two weeks found that 64 percent were satisfied with the current level of service from the new flight service system.

"But if you were taking an FAA written test, that would be a failing grade," Boyer told Congress. He asked the aviation subcommittee to keep demanding reports from the FAA until "we get equal or better service" than the old system.

He asked for additional metrics to evaluate Lockheed Martin's performance. "Let's seek more aggressive feedback from our pilot community," and measure the quality of the briefing, not just the time to answer the phone.

Boyer concluded by noting that, "We're a part of this." While AOPA didn't select Lockheed Martin, it was part of making the transition happen. The association educated pilots beforehand on the need for the change and "we'll educate pilots on how to brief using the new system."

He said a "how to" card will be in some 500,000 AOPA Pilot and AOPA Flight Training magazines to be mailed out next month. An online course will be available in early 2008. And he said AOPA would continue pushing until "equal or better service is truly out there."