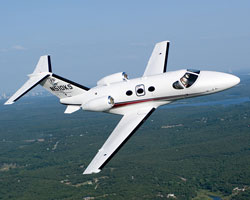 In the race to be No. 1 in the very light jet market—first flight, first FAA certification, first delivery—a new kind of competition is forming to see which is the fastest.

Cessna Aircraft Company and Eclipse Aviation have blazed a trail from New York City to Atlanta to set U.S. national speed records in the VLJ class.

On Oct. 7, the Eclipse 500 flew from Westchester County Airport in White Plains, N.Y., to Dekalb-Peachtree Airport in Atlanta at 393 mph with a time of one hour, 55 minutes, and eight seconds, according to the National Aeronautic Association (NAA).

The Cessna Citation Mustang had established the VLJ record for that route on Sept. 22, coming in at 318 mph with a flight time of two hours, 23 minutes, and 44 seconds.

Eclipse and Cessna took different approaches to get the records. While Cessna counted its record attempt from take off to touchdown, Eclipse opted for airborne start and finish points. The NAA accounts for these differences by measuring the distance between the official start and stop points and taking the time between those points to calculate the aircraft's actual speed. Factors like wind are not included in the calculations.

The NAA did its part to foster competition by creating the VLJ record class in June.

"The VLJ class is more narrowly defined than other airplane record classes, so it will allow for better comparisons of the various models," said Art Greenfield, NAA director of contests and records.

For the record class, the NAA considers a VLJ a jet-powered airplane with a maximum gross takeoff weight of 10,000 pounds or less that has a standard airworthiness certificate and is capable of carrying four or more passengers.