Get the app Get the app
AOPA Members DO more LEARN more SAVE more - Get MORE out of being a pilot - CLICK HERE
News & Media Tell customs: Border-crossing rules unrealistic, unworkable 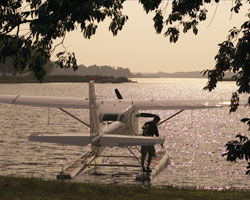 It started out as a simple, reasonable concept: Give Customs and Border Protection (CBP) advance notice of who will be crossing the border when and in what. But the federal government can often turn simple into impractical and unreasonable.

That's why AOPA is asking members to let CBP know that its proposal to require pilots to get flight clearance via the Internet just won't work in the real world of general aviation flying to and from popular landing strips in places like Mexico and the Caribbean. And time is short. Your comments need to be in before Nov. 19.

"AOPA members have told us that it is difficult to find a working telephone, much less a computer with Internet access, at many of the international locations that they fly to," said Andy Cebula, AOPA executive vice president of government affairs. "And we're very concerned about establishing the precedent that a government agency must give you approval before you can start a flight in domestic U.S. airspace."

CBP wants to require pilots to submit a passenger list (manifest) via the Internet before leaving or returning to the United States. CBP wants to use its electronic Advance Passenger Information System (eAPIS)—similar to that already used by the airlines—to check GA passengers against terrorist watch lists.

In CBP's idealized world, you'd log onto a Web site at least one hour before you intended to fly across the U.S. border, punch in your ID and your passengers' names, and then get an approval to fly.

But the reality is that pilots don't have universal access to the Internet inside the United States, much less from a Baja airstrip or a Bahamian cay. And requiring pilots to land at another airport with Internet access before crossing the border just to be able to file a passenger list is impractical and an unreasonable burden.

"CBP must allow alternative means for operators of small aircraft to file a passenger manifest, as the current system already does," said Cebula. "In the real world, sometimes a telephone or radio call to flight service is the best you can do. And they have to recognize that GA pilots sometimes have to change schedules for weather or operational considerations, and we need choices beyond the Internet to let customs and Homeland Security know about changed plans for entering or exiting the United States."

If you ever have or ever will fly a GA aircraft across U.S. borders, please comment now on CBP's notice of proposed rulemaking "Advance Information on Private Aircraft Arriving and Departing the United States." All the information you need to comment is available here.