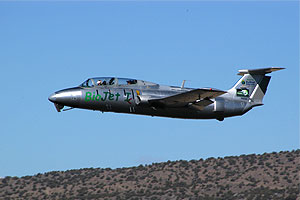 The day may come when the private and commercial jets crisscrossing our skies run, at least in part, on plant-based fuels that don’t contribute to global warming or resource depletion.

That’s the goal of pilot and entrepreneur Douglas Rodante who, on Oct. 1, made the first jet flight fueled by 100-percent biodiesel. Rodante and Chief Pilot Carol Sugars first flew a Czechoslovakian-built L-29 aircraft around the pattern before making a 37-minute test-flight at altitudes up to 17,000 feet the following day. The aircraft, which is rated to run on a variety of fuels, including heating oil, required no modifications to run on biodiesel.

“This proves that we can implement bio-fuels into our existing air and ground transportation system,” Rodante said of the first flights.

Rodante plans to make a cross-country flight from Nevada to Florida at the end of November, as soon as he and his team have satisfied several FAA testing and safety requirements. And they hope to modify a Learjet to make a high-altitude round-the-world flight next year. The test program is being conducted by Green Flight International and Biodiesel Solutions.

So just what was in the biodiesel used in the test flights? Recycled vegetable oil from restaurants that has been treated with an additive to remove the carbon chains. For the longer cross-country flight, the team plans to use canola oil that has been similarly treated, but these aren’t the only possible sources of biodiesel.

“It’s important for people to understand that we can use a lot of different crops to make biodiesel, many of which do not compete with our food crops. There are plants you can actually grow in the desert that would work,” Rodante explained.

Even with the promise shown by these initial flights, don’t expect to board a commercial airliner running on biodiesel anytime soon. The fuel does have a tendency to gel at cold temperatures and its solvent properties can cause short-term fuel system clogs in vehicles that have previously been used with traditional fossil fuels. But scientists and amateur enthusiasts alike are working to resolve these problems and expect that some mixture of biodiesel and traditional fuel will make its way into the mainstream in coming years.

“You don’t have to use 100-percent biodiesel,” said Rodante. “We’re doing it to make a point. But if we can implement even a small percentage of bio-fuel into commercial aviation and land transportation, the reduction in carbon emissions would be significant and contribute to alleviating our global warming problems.”