Get the app Get the app
Already a member? Please login below for an enhanced experience. Not a member? Join today
News & Media Another Diamond D-Jet flies 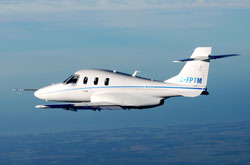 A second Diamond D-Jet has made its maiden flight. The jet flew on Sept. 14 from Diamond's London facility.

Chief test pilot Daniel Ribeiro conducted the flight in Serial No. 2, which was chased by Serial No. 1. Ribeiro said the 43-minute flight was uneventful and there were some expected improvements based on what engineers learned from the first airplane. The gear was retracted and the airplane reached an altitude of 11,000 feet.

Serial No. 2 is a conforming test article for government certification and represents the production configuration. Diamond is building three more aircraft for certification. The five-place jet is powered by a single Williams International FJ33 engine and will feature a Garmin all-glass flight deck. It's designed to operate in the lower flight levels.