Get the app Get the app
Already a member? Please login below for an enhanced experience. Not a member? Join today
News & Media Cessna 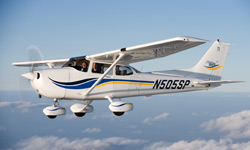 If your seatback in the Cessna 172, 182, or 206 collapsed during takeoff, what would you do? The natural instinct is to pull back on the yoke, which can cause the aircraft to enter an unusual attitude.

The FAA is proposing an airworthiness directive (AD) that would require the seat base attach bracket on these models be fitted with a bracket modification kit. On the Cessna 172 and 182, the AD would apply only to the crew seats.

However, the FAA wants to modify the brackets on the crew and third and fourth seats in the Cessna 206. AOPA has recommended that noncrew seats on the Cessna 206 be excluded from the AD because these seats do not pose a threat to the safety of flight. AOPA believes the Cessna 206 noncrew seats were appropriately addressed in a Cessna service bulletin issued earlier this year.