Get the app Get the app
Already a member? Please login below for an enhanced experience. Not a member? Join today
News & Media Technam 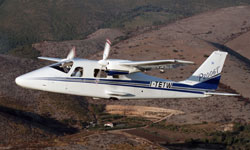 Though Tecnam Aircraft is primarily known to pilots in the United States for its light sport aircraft—such as the P92 Echo Super and the P2004 Bravo—the company's plans to extend its reach into Part 23 certificated aircraft took another step forward with the first flight of the P2006T light twin earlier this week.

Look for a feature on the Echo Super and the Bravo in an upcoming issue of AOPA Pilot.