Get the app Get the app
AOPA will be closing at 1:45pm ET on Tuesday, December 6th. We will reopen Wednesday morning at 8:30am ET.
AOPA Members DO more LEARN more SAVE more - Get MORE out of being a pilot - CLICK HERE
News & Media Is Cessna going low-wing? 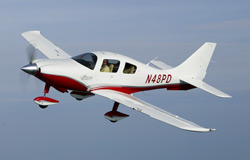 Cessna Aircraft wants to expand its reach in the small airplane segment of the general aviation industry by acquiring Columbia Aircraft. Although such a move had been rumored for days, it wasn’t confirmed until Cessna and Columbia both sent out brief news releases on Sept. 24, revealing that Columbia has filed for Chapter 11 bankruptcy. Cessna, meanwhile, has signed a letter of intent with Columbia to “acquire selected assets and certain liabilities.”

For Cessna, the acquisition would fill a gap in its product line, which lacks single-engine airplanes in the 200-knot range. But the composite Columbia models represent a vast departure for Cessna, having built its reputation on high-wing metal airplanes. For Columbia, such a move would obviously save the company and provide reassurance to customers by stabilizing a two-model operation.

It’s not clear how Cessna would run both operations since its manufacturing is already located in Independence, Kan., while Columbia is in Bend, Ore. Cessna chief Jack Pelton hinted toward the future by mentioning its next generation of aircraft. The company has been showing off a slicked-up, high-wing airplane aimed at the fast cross-country market at various trade shows. He said in a statement that the Columbia acquisition “could provide our customers with the option of an outstanding low-wing, high-performance piston airplane. We believe the combination of this superb product line and Cessna’s world-class support structure and brand will be unbeatable.”

The Columbia 400 and 350 models would put Cessna in direct competition with high-end Piper, Mooney, Cirrus, and Diamond models. Columbia has filed a motion with the bankruptcy court, seeking approval of the sale to Cessna while establishing bidding procedures so that others can submit offers at an auction tentatively scheduled for November. Cessna’s agreement is obviously intended to send a signal to other potential bidders that it means business.

Under the agreement, all Columbia product warranty and service issues would be honored after the acquisition. Columbia officials said they had to file for bankruptcy to continue operating. The company has received $3 million in additional financing to keep it afloat during the court proceedings. Columbia expects to produce about three airplanes per week in the interim.