Get the app Get the app
AOPA Members DO more LEARN more SAVE more - Get MORE out of being a pilot - CLICK HERE
News & Media Aspen gives away $6,000 PFD 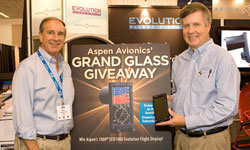 After installing its first FAA-certified primary flight display (PFD) in the AOPA’s 2008 Get Your Glass Sweepstakes airplane, Aspen Avionics celebrated by giving away its 1,000th unit Saturday at AOPA Expo.

AOPA President Phil Boyer chose the card of the winner, May Novak, from hundreds of AOPA members who entered to win the drawing.

“The first unit is working just fine,” said Boyer, who recently flew the 2008 Get Your Glass Sweepstakes Airplane—a totally restored 1976 Piper Archer. The AOPA sweepstakes winner will be chosen in January, and all 415,000 members are automatically entered in the drawing.

The Aspen PFD has a retail value of $5,995. The units have been approved for installation in more than 650 aircraft types, and Aspen anticipates certification in 2009 of aircraft up to 12,500 pounds.