Get the app Get the app
AOPA will be closed on Monday, February 17, 2020, in observance of Presidents' Day.
Already a member? Please login below for an enhanced experience. Not a member? Join today
News & Videos D.C. ADIZ becomes federal regulation 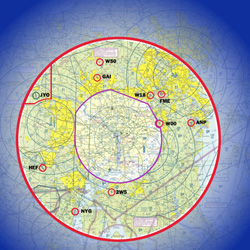 The government created the SFRA despite overwhelming opposition from general aviation pilots. More than 22,000 pilots wrote to the FAA opposing the rule.

“It’s extremely disappointing that the ADIZ—something that was hastily implemented as a temporary measure—has become federal regulation,” said Andy Cebula, AOPA executive vice president of government affairs. “We never gave up trying to eliminate the ADIZ, working with security officials, members of Congress, the White House, and the FAA.”

The SFRA area goes into effect Feb. 17, 2009. Make sure you are prepared by completing the FAA’s online ADIZ training course, Navigating the New DC ADIZ , by Feb. 9. Anyone planning to fly within 60 nm of the Washington, D.C., (DCA) VOR/DME after that date must complete the course before flying in the area. Get more information on filing flight plans through the area, intercept procedures, and fight operations. The FAA has codified special flight rules and flight restrictions for certain aircraft operations in the Washington, DC Metropolitan Area. The new rules and the NOTAMs described in this advisory will go into effect on Feb. 17, 2009.

The ADIZ, which has been in effect by notam since 2003, will be under 14 CFR Part 93 as the Washington, D.C., Metropolitan Area Special Flight Rules Area starting Feb. 17, 2009. The 30-nautical-mile-radius ADIZ remains the same, extending from the surface up to 18,000 feet msl, as does the 60-nm speed ring.

The notam will go away, but pilots flying through the SFRA will need to comply with the same rules as they have for years. ( See AOPA’s ADIZ Operations Checklist.) Incorporating current policy, anyone who willfully violates the SFRA will still be subject to criminal penalties.

Special procedures at Leesburg Executive Airport in Leesburg, Va., are not included in the rule and will continue to be controlled by notam.

“Operationally, nothing changes for pilots,” Cebula said. “But issuing an ADIZ final rule is a concern because a temporary flight restriction was imposed, without consulting airspace users, and later made ’permanent’ with no documented justification.”

FAA and security officials have never provided a specific, intelligence-based threat assessment to justify to Congress or the pilot community the design of or procedures required in the ADIZ. Congress had called on security officials numerous times to testify about the ADIZ, whether it was necessary, and what economic impact it was having on airports in the area.

AOPA commissioned an economic study in 2005 that showed that 10 of the 13 airports analyzed inside the ADIZ were losing about $43 million in annually in wages, revenue, taxes, and local spending.

The association was successful in getting the size of the ADIZ reduced from its original “Mickey Mouse” shape that encompassed the Baltimore-Washington, D.C., Class B airspace to its current 30-nm radius. However, AOPA had also lobbied that it be further reduced to a 20-nm radius or outright eliminated because the government has never provided evidence that the ADIZ has resulted in any measurable increase in security.

“While this is a final rule,” Cebula said, “circumstances and conditions evolve, and rules can be changed.”